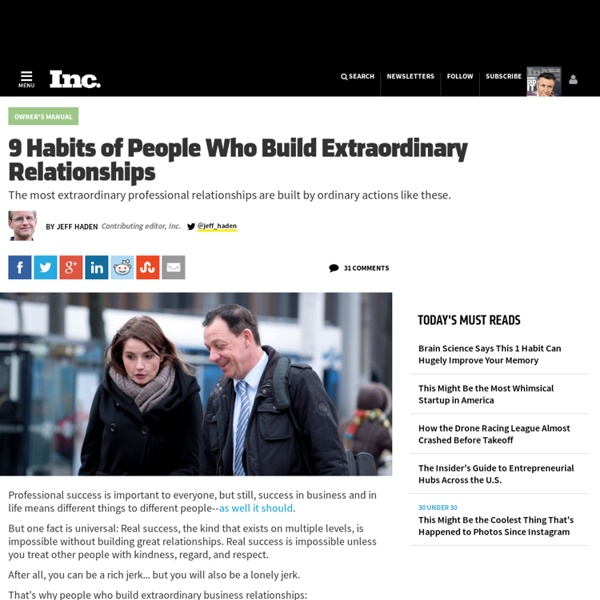 Professional success is important to everyone, but still, success in business and in life means different things to different people--as well it should. But one fact is universal: Real success, the kind that exists on multiple levels, is impossible without building great relationships. Real success is impossible unless you treat other people with kindness, regard, and respect. After all, you can be a rich jerk... but you will also be a lonely jerk. That's why people who build extraordinary business relationships: 1. A customer gets mad. Sometimes, whatever the issue and regardless of who is actually at fault, some people step in and take the hit. Few acts are more selfless than taking the undeserved hit. 2. It's easy to help when you're asked. Very few people offer help before they have been asked, even though most of the time that is when a little help will make the greatest impact. Instead they come up with specific ways they can help. 3. 4. 5. One easy way is to give unexpected praise.

3 Biggest Excuses of Wanna-Be Leaders This is a familiar dynamic: After facilitating a coaching or training session, or after speaking at a conference, two groups of people form around the speaker in concentric circles. The first, inner group are leaders who want to know more. The second, outer group, hanging back a little meekly are the wanna-be leaders. The conversations I have with both groups are always fascinating. You'd think that people who want to be leaders (but aren't yet), would each be in that position for highly individual and therefore unpredictable reasons. 1. Here's the thing: Leaders aren't created upon arrival in a position. If you're truly intent on being a leader, then that's precisely what you need to do: Lead. Find ways to do what you do, better. 2. Look, to get started as a leader, the only person you need permission from is you. Yes, after you've begun to lead, you will need other people's permission, in the form of them accepting your leadership. 3.

Become a Great Negotiator: 5 Steps Although everyone claims to want a "win-win" deal, the sad truth is that most businesspeople are competitive and subconsciously want to "win" by making the other person "lose." Even when you enter negotiations with the best of intentions, it's fair to assume that, at some level, your counterpart wants to see you "lose" at least something. There's also probably a part of you that probably feels the same way about them. The trick to moving out of this mentality is to "increase the size of the pie," according to Dr. To accomplish this, you treat the negotiation as a way to expand the deal to include items that both parties want but may not have identified or realized when they first entered the negotiation. 1. When Dr. In most business situations, people who are working together--rather than competing--tend to sit next to each other, sharing what they know in order to reach a higher level understanding. 2. 3. 4. 5.

3 Steps to Becoming a High-Value Employee | The Snelling Blog Your future rests on your shoulders..not someone else’s. Yes, there are times when massive downsizing or even closures occurs ( ala Hostess Brands or American Airlines), and you may be handed a pink slip, but generally, others are not going to hand you a job/promotion/raise out of the blue. In most cases, when downsizing occurs, senior management makes the decision on who stays and who goes based upon some value judgment of a particular person’s worth. To make things more difficult, each manager has a different definition and set of expectations for “value”. So with all this confusion, how can you ensure not only your job stability but your future career growth? FedEx – the oil crisis of 1973. Value is everywhere. For example: 1) Go beyond the bullet-points in your job description. 2) Show support and give credit where credit is due. 3) Tolerate company idiosyncrasies and embrace your workplace. Remember, your value is not determined by you. By Christiane Soto, Snelling.com

10 Things To Do Every Workday Culture Code: Building A Company YOU Love Use what you already have to build more confidence 4inShareinShare4 There are times when you may feel your professional confidence wavering. This happens more often to people than you may think as a result of a move, a shift in your niche, networking with a new group and so on. Clients have asked me how to shore up and strengthen their professional confidence, especially as it relates to being in the public eye. I can relate because when I was first starting out, I struggled with this myself. 1. Any time a client sent me a really nice email, a testimonial or thank you note, I saved it in my “Kind Words” file. 2. BNI is not only a great networking opportunity, but also a great place to practice your elevator pitch on a weekly basis. But each week at BNI, I had to get up again and again and I didn’t give up. 3. I have found that the times I’ve gotten really nervous speaking in public, I was more concerned with what other people were thinking about me than focusing on what I love to talk about. Your Client Attraction Assignment

Developing Executive Presence - Joshua Ehrlich by Joshua Ehrlich | 11:12 AM December 6, 2011 “Make her two inches taller!” This command came from Bruce, an executive who wanted me to work with his most talented direct report. Amy was a brilliant high potential who Bruce hoped would succeed him, but she had one serious flaw — she lacked presence. When I met Amy this was immediately visible. She was indeed short — a slight woman who walked quickly, hunched over so she occupied even less space. I knew this would be challenging — but not impossible. Amy understood this intellectually but didn’t know where to begin. Focus. Use body language. Reflect on your habits. Practice with support. Connect, don’t transact. Be still. After several months, Bruce, Amy, and I met to close out the coaching.

The 7 Elements of Executive Presence The 7 Elements of Executive Presence How to Develop the "Wow" Factor That Makes Great Leaders Stand Out By Suzanne Bates We’ve all witnessed that moment when someone walks into a room at a business or social event and instantly attracts intense, positive attention. The air shifts. Heads turn. The wow factor is often called “executive presence.” Is executive presence in your DNA or can you learn it? Executive presence creates a strong personal brand. Executive presence isn’t just fluff, and it isn’t about first impressions; it is a thought or feeling about you that develops over time based on other people’s experiences with you. So how do you start developing a powerful executive presence and create your own personal brand? 1) Substance 2) Personal Style 3) Physical Presence 4) Vocal Skill 5) Manners/Etiquette 6) Receptivity/Listening 7) Work Space #1. #2. #3. #4. #5. #6. #7. Now, where do you start?

6 Tips For Developing “Executive Presence” | Unbridled Talent This week, I’m attending the SHRM Annual Conference in New Orleans (read about my first day on RecruitingConferences.com) and this afternoon, I attended one of the Mega Sessions led by Author and Communications Expert Dianna Booher titled “Creating Executive Presence: Communicate with Confidence in the C-Suite”. As an Executive Coach working with leaders to improve their skills and grow in their careers, it’s not uncommon for me to work with an otherwise successful leader who just doesn’t have the charisma or “It Factor” some are blessed with that naturally compels people to follow them. Thankfully, all hope is not lost and Ms. To demonstrate her point, two members of the audience were invited up onto the stage to give a 60 second presentation about a project they were currently working on to the audience of several hundred. So what were some of the secrets shared with the audience volunteers in 30 seconds of coaching that made such a difference?

The Best Promotion Is Never Self Promotion Promoting yourself is easy. All it takes is a little guts, a little determination, and in extreme cases, very little self-awareness. We all try, to some degree, to promote ourselves. That's why we're all experts at picking out the self-promoters, shameless or otherwise. And that's why self-promotion is rarely effective. There's a much better way. There was always that last two minutes where Johnny was asking people, "Thank you for coming--what do you have coming up?" You have the same ability to promote with your employees, your customers, your vendors--basically anyone--but it's easy to lose sight of that when your primary focus is on crafting a business image, building a personal brand, or just protecting your professional turf. Entrepreneurs are especially vulnerable to glory hogging since early on a small business is a reflection of its owner and its success often depends on the owner's ability to build a reputation for knowledge and expertise. But it can be done.