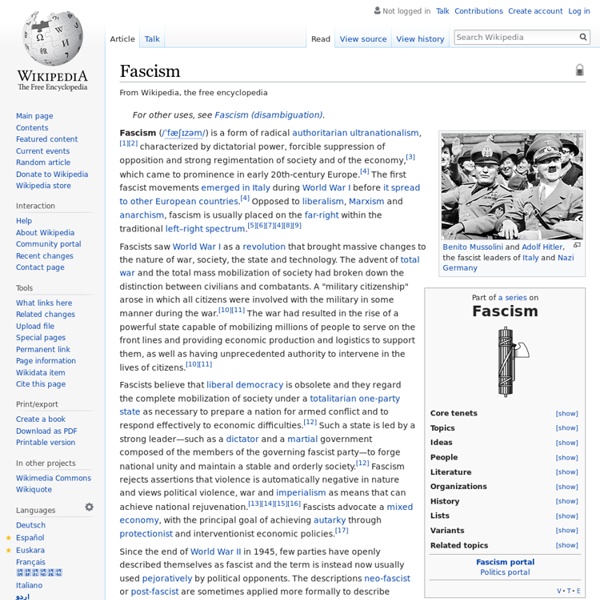 Fascism (/ˈfæʃɪzəm/) is a form of radical authoritarian ultranationalism,[1][2] characterized by dictatorial power, forcible suppression of opposition and strong regimentation of society and of the economy,[3] which came to prominence in early 20th-century Europe.[4] The first fascist movements emerged in Italy during World War I before it spread to other European countries.[4] Opposed to liberalism, Marxism and anarchism, fascism is usually placed on the far-right within the traditional left–right spectrum.[5][6][7][4][8][9] Fascists saw World War I as a revolution that brought massive changes to the nature of war, society, the state and technology. The advent of total war and the total mass mobilization of society had broken down the distinction between civilians and combatants. Etymology Definitions John Lukacs, Hungarian-American historian and Holocaust survivor, argues that there is no such thing as generic fascism. Position in the political spectrum "Fascist" as a pejorative History Related:  Info

Capitalism The degree of competition, role of intervention and regulation, and scope of state ownership varies across different models of capitalism.[5] Economists, political economists, and historians have taken different perspectives in their analysis of capitalism and recognized various forms of it in practice. These include laissez-faire capitalism, welfare capitalism, crony capitalism and state capitalism; each highlighting varying degrees of dependency on markets, public ownership, and inclusion of social policies. The extent to which different markets are free, as well as the rules defining private property, is a matter of politics and policy. Etymology[edit] The term capitalist as referring to an owner of capital (rather than its meaning of someone adherent to the economic system) shows earlier recorded use than the term capitalism, dating back to the mid-17th century. Economic elements[edit] The essential feature of capitalism is the investment of money in order to make a profit.[35]

Socialism Socialism is a range of economic and social systems characterised by social ownership and democratic control of the means of production,[10] as well as the political theories and movements associated with them.[11] Social ownership may refer to forms of public, collective or cooperative ownership, or to citizen ownership of equity.[12] There are many varieties of socialism and there is no single definition encapsulating all of them,[13] though social ownership is the common element shared by its various forms.[5][14][15] Etymology The origin of the term "socialism" may be traced back and attributed to a number of originators, in addition to significant historical shifts in the usage and scope of the word. For Andrew Vincent, "[t]he word ‘socialism’ finds its root in the Latin sociare, which means to combine or to share. The related, more technical term in Roman and then medieval law was societas. History Early socialism Paris Commune First International Second International Early 20th century

Guess What? Millennials Want A Lot Of The Same Things As Their Parents This article is more than 4 years old. There’s a lot that’s said about Millennials, like that they’re perennial renters, job hoppers and not keen on settling down. Yet, a new survey from Credit Karma suggests that in many ways, the generation isn’t so different from their parents. The vast majority of Millennials still desire the so-called American Dream, which includes getting married, buying a house and having children. “They’re delaying things like marriage and homeownership, but it’s not that they don’t want them,” says Bethy Hardeman, chief consumer advocate at Credit Karma. The survey found that a whopping 88% of Millennials who are currently renting eventually want a place to call their own, 83% of single Millennials hope to tie the knot and 75% see kids in their future. So, what’s the hold-up? To be sure, the degree to which student loans are dictating people’s lives can depend on just how far in the red they are. The financial crisis is also still haunting Millennials.

Me generation The "Me" generation is a term referring to Baby Boomers in the United States and the self-involved qualities that some people associate with it.[1] The 1970s were dubbed the "Me decade" by writer Tom Wolfe;[2] Christopher Lasch was another writer who commented on the rise of a culture of narcissism among the younger generation of that era.[3] The phrase caught on with the general public, at a time when "self-realization" and "self-fulfillment" were becoming cultural aspirations to which young people supposedly ascribed higher importance than social responsibility. Origins[edit] Jogging and other health and diet trends went mainstream with the Me generation. The cultural change in the United States during the 1970s that was experienced by the Baby Boomers is complex. By the mid-1970s, Tom Wolfe and Christopher Lasch were speaking out critically against the culture of narcissism.[3] These criticisms were widely repeated throughout American popular media. Characteristics[edit] See also[edit]

Feudalism Feudalism was a set of legal and military customs in medieval Europe that flourished between the 9th and 15th centuries. Broadly defined, it was a system for structuring society around relationships derived from the holding of land in exchange for service or labour. Although derived from the Latin word feodum or feudum (fief),[1] then in use, the term feudalism and the system it describes were not conceived of as a formal political system by the people living in the medieval period. In its classic definition, by François-Louis Ganshof (1944),[2] feudalism describes a set of reciprocal legal and military obligations among the warrior nobility, revolving around the three key concepts of lords, vassals and fiefs.[2] There is also a broader definition, as described by Marc Bloch (1939), that includes not only warrior nobility but all three estates of the realm: the nobility, the clerics and the peasantry bonds of manorialism; this is sometimes referred to as a "feudal society". Definition

Link between Alzheimer's disease and gut microbiota is confirmed Alzheimer's disease is the most common cause of dementia. Still incurable, it directly affects nearly one million people in Europe, and indirectly millions of family members as well as society as a whole. In recent years, the scientific community has suspected that the gut microbiota plays a role in the development of the disease. A team from the University of Geneva (UNIGE) and the University Hospitals of Geneva (HUG) in Switzerland, together with Italian colleagues from the National Research and Care Center for Alzheimer's and Psychiatric Diseases Fatebenefratelli in Brescia, University of Naples and the IRCCS SDN Research Center in Naples, confirm the correlation, in humans, between an imbalance in the gut microbiota and the development of amyloid plaques in the brain, which are at the origin of the neurodegenerative disorders characteristic of Alzheimer's disease. The brain under influence A very clear correlation A strategy based on prevention Disclaimer: AAAS and EurekAlert!

UK to consider sanctions against China for breaching Hong Kong treaty LONDON (Reuters) - Britain on Thursday said China had broken its main bilateral treaty on Hong Kong by imposing new rules to disqualify elected legislators in the former British colony, cautioning that it would consider sanctions as part of its response. The British flag was lowered over Hong Kong when the colony was handed back to China in 1997 after more than 150 years of British rule - imposed after Britain defeated China in the First Opium War. Hong Kong’s autonomy was guaranteed under the “one country, two systems” agreement enshrined in the 1984 Sino-British Joint Declaration signed by then Chinese Premier Zhao Ziyang and British Prime Minister Margaret Thatcher. “Beijing’s imposition of new rules to disqualify elected legislators in Hong Kong constitutes a clear breach of the legally binding Sino-British Joint Declaration,” Foreign Secretary Dominic Raab said. “China has once again broken its promises and undermined Hong Kong’s high degree of autonomy.”

Hannah Arendt Life and career[edit] Arendt was born into a secular family of German Jews in Linden (present-day Hanover), the daughter of Martha (born Cohn) and Paul Arendt.[7] She grew up in Königsberg (renamed Kaliningrad and annexed to the Soviet Union in 1946) and Berlin. At the University of Marburg, she studied philosophy with Martin Heidegger. According to Hans Jonas, her only German-Jewish classmate, Arendt embarked on a long and stormy romantic relationship with Heidegger, for which she later was criticized because of Heidegger's support for the Nazi Party when he was rector at the University of Freiburg. In the wake of one of their breakups, Arendt moved to Heidelberg, where she wrote her dissertation under the existentialist philosopher-psychologist Karl Jaspers on the concept of love in the thought of Saint Augustine. Paris[edit] New York[edit] Post-war[edit] A letter about Palestine signed by Albert Einstein, Hannah Arendt and others Death[edit] Works[edit] The Origins of Totalitarianism[edit]