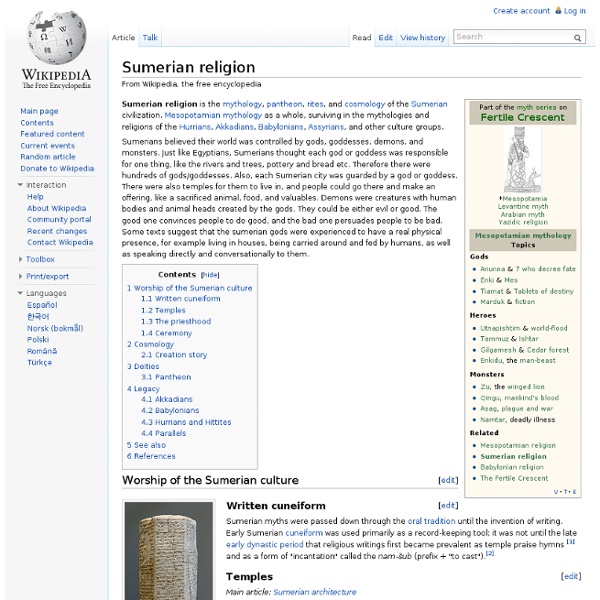 A Course In Miracles ~ Free Searchable Urtext Version - § 1: Miracle Principles 1-14 It is crucial to say first that this is a required course. Only the time you take it is voluntary. Free will does not mean that you establish the curriculum. It means only that you can elect what to take when. It is just because you are not ready to do what you should elect to do that time exists at all. 1. 2. 3. a. (Q and A re first 3 points.) (HS fearful in taxi about a communication which related Dave’s healing and Jonathan’s hernia. 4. 5.Miracles are habits, and should be involuntary. 6. 7. 8. 9. 10. (A miracle is misunderstood when it is regarded as a spectacle.)11. (When you say “If you want me to I will” please add “and if you DON’T want me to I won’t.” 12. 13. 14.

Gilgamesh Gilgamesh (/ˈɡɪl.ɡə.mɛʃ/; Akkadian cuneiform: 𒄑𒂆𒈦 [𒄑𒂆𒈦], Gilgameš, often given the epithet of the King, also known as Bilgamesh in the Sumerian texts)[1] was the fifth king of Uruk, modern day Iraq (Early Dynastic II, first dynasty of Uruk), placing his reign ca. 2500 BC. According to the Sumerian King List he reigned for 126 years. In the Tummal Inscription,[2] Gilgamesh, and his son Urlugal, rebuilt the sanctuary of the goddess Ninlil, in Tummal, a sacred quarter in her city of Nippur. Cuneiform references[edit] In the Epic of Gilgamesh, Gilgamesh is credited with the building of the legendary walls of Uruk. Fragments of an epic text found in Me-Turan (modern Tell Haddad) relate that at the end of his life Gilgamesh was buried under the river bed. Later (non-cuneiform) references[edit] In the Qumran scroll known as Book of Giants (ca. 100 BC) the names of Gilgamesh and Humbaba appear as two of the antediluvian giants (in consonantal form), rendered as glgmš and ḩwbbyš.

How Fundamentalist Religion Is Destroying The World by Frank Schaeffer July 3, 2011 from AlterNet Website The earth bursts with life. The countries in the world that are the most fundamentalist and religious, and/or those whose identity is most religion-based, are the world's greatest troublemakers. Pakistan Iran Saudi Arabia the USA Vatican City the state of Israel, ...come to mind. If the rest of the human race could find a time machine to roll back the clock and make a world where these countries/city states had never existed we'd live in a better world. Just take one example of religion's baleful influence: President Woodrow Wilson's messianic religion-inspired intervention in World War One. "My life would not be worth living" Wilson wrote, "if it were not for the driving power of religion, for faith, pure and simple." Wilson's religious views were the driving force in his political career, informing his quest for world peace. And like all fanatics he decided to achieve this "peace" through war. So who is the patriot here?

Zu (mythology) In Sumerian and Akkadian mythology, Anzû is a divine storm-bird and the personification of the southern wind and the thunder clouds. This demon—half man and half bird—stole the "Tablets of Destiny" from Enlil and hid them on a mountaintop. Anu ordered the other gods to retrieve the tablets, even though they all feared the demon. In Babylonian myth, Anzû is a deity associated with cosmogeny. Jump up ^ Greek Myths and Mesopotamia: Parallels and Influence in the Homeric Hymns and Hesiod Boulay Chapter 4 By R. A. Boulay 1990 Editorial Comments By Roberto Solàrion 1997 Chapter 4 Is there evidence in Western religious literature that corroborates the activities of the Anunnaki as it is found in the numerous myths, poems, and hymns of Mesopotamia? There is a large body of religious literature besides the Book of Genesis which deals with the period before the Deluge. Much of what is not intelligible in these ancient religious writings is explained in part in the large library of available Sumerian, Babylonian and other cuneiform inscriptions. Much as Biblical apologists have tried to avoid or cloud the issue of the origin of the Old Testament, the historical facts clearly show that its antecedents are in the valley of Mesopotamia. The actual language of the Sumerians was superseded rather early by Akkadian, a Semitic tongue. It should be more widely realized that when those famous Biblical figures Noah and Abraham lived, there was no such thing as a Hebrew in existence.

Realization of Prophetic Visions Realization of Prophetic Visions By Philip Mark Ames God's Woman The twelfth chapter of the Revelation opens with John's vision of a great heavenly display. John was in spirit and so capable of observing both spiritual and physical realities. What he saw was a woman arrayed with sunlight. This woman is the spiritual, or fifth-dimension, manifestation of human submissiveness to God, Had Adam and Eve and their descendants willingly obeyed God, living in harmony with His standards of righteousness, all mankind would have become the wife of God. After Adam sinned, God's purpose did not change. After Abraham and his wife Sarah had been married for many years, they were still without child. When Hagar's son was fifteen years old, 90-year-old Sarah bore a son to 100-year-old Abraham. The fifty-fourth chapter of Isaiah is addressed to this woman. John saw a crown of twelve stars on the woman's head. The point in time where this scenario begins is just before the death of Jesus Christ.

Jesus | Carpe Noctem - Seize the NightCarpe Noctem – Seize the Night The mysterious French organization known as the Priory of Zion may be a nine-hundred-year-old secret society possessing proof that Jesus Christ survived the crucifixion. What’s more, it may also be the repository of Europe’s secret history, and indeed the underground annals of all Christendom. Then again, maybe it’s just an extremely elaborate hoax. Whichever, it launched a best-selling book, 1982′s Holy Blood, Holy Grail, by BBC documentary filmmaker Henry Lincoln and historians Michael Baigent and Richard Leigh. Lincoln and company set out to write about one of France’s most enduring riddles, the legend of Rennes-le-Chateau, an antique village ensconsed in the Pyrenees mountains. Whatever the theory, Rennes-le-Chateau owes its renaissance as a mystical landmark to a nineteenth-century cleric named Berenger Sauniere, and that is where Lincoln, Baigent, and Leigh began their quest. Whatever it all meant, apparently it became Sauiere’s entrée into a new world, with the accent on worldly.

Cedar Forest A Cedar Forest in Lebanon The Cedar Forest is the glorious realm of the gods of Mesopotamian mythology. It is guarded by the demigod Humbaba and was once entered by the hero Gilgamesh who dared cut down trees from its virgin stands during his quest for immortality. The Cedar Forest is described in Tablets 4-6 of the great Epic of Gilgamesh. Early translators of the Epic have assumed that the "Ceder Forest" refers to the Lebanon Ceders. Tablet 4[edit] Tablet four tells the story of the journey to the cedar forest. The skies roared with thunder and the earth heaved, Then came darkness and a stillness like death. Lightning smashed the ground and fires blazed out; Death flooded from the skies. When the heat died and the fires went out, The plains had turned to ash. Enkidu's interpretation is missing here, but as with the other dreams, it is assumed he puts a positive spin on the volcanic dream. Tablet 5[edit] Tablet 6[edit] Father, let me have the Bull of Heaven To kill Gilgamesh and his city.

untitled Some Definitions By using the terms "cult," "occult," and "New Age," Watchman Fellowship is in no way implying that the followers or leaders are necessarily evil or immoral people. It simply means that such groups seem to promote doctrine or practices which may be considered outside the realm of historic Christianity. Cult By its primary dictionary definition, the term cult just means a system of religious beliefs or rituals. Occult The term, "occult" comes from the Latin occultus or "hidden." Generally the word is used of secret or mysterious supernatural powers or magical, religious rituals. New Age New Age is a recent and developing belief system in North America encompassing thousands of autonomous (and sometime contradictory) beliefs, organizations, and events. 3H0: See Healthy, Happy, and Holy. 7 Habits of Highly Effective People: A book by Stephen Covey. Abbey of Thelema, Old Greenwich, CT: Esoteric magic, teachings of Aleister Crowley. Academy for Guided Imagery, Martin L.

Epic of Gilgamesh The Epic of Gilgamesh, an epic poem from Mesopotamia, is considered the world's first truly great work of literature. The literary history of Gilgamesh begins with five Sumerian poems about 'Bilgamesh' (Sumerian for 'Gilgamesh'), king of Uruk. These independent stories were used as source material for a combined epic. The first surviving version of this combined epic, known as the "Old Babylonian" version, dates to the 18th century BC and is titled after its incipit, Shūtur eli sharrī ("Surpassing All Other Kings"). Only a few tablets of it have survived. The first half of the story discusses Gilgamesh, king of Uruk, and Enkidu, a wild man created by the gods to stop him oppressing the people of Uruk. In the second half of the epic, Gilgamesh's distress at Enkidu's death causes him to undertake a long and perilous journey to discover the secret of eternal life. History[edit] Versions of the epic[edit] Standard Akkadian version[edit] Content of the standard version tablets[edit]