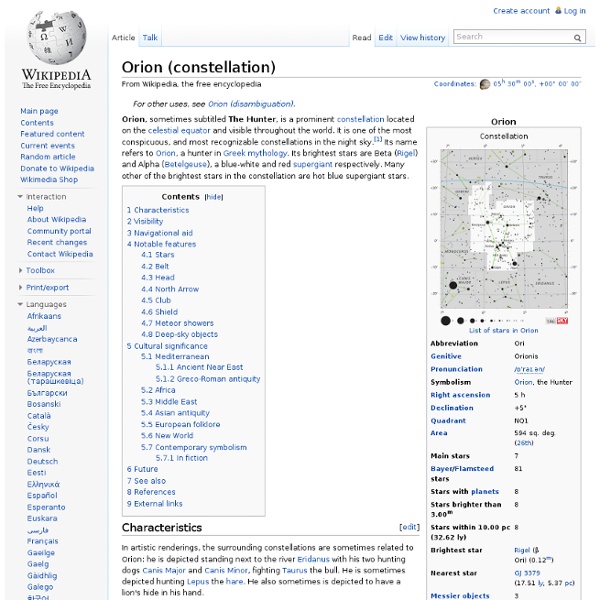 The earliest depiction that has been linked to the constellation of Orion is a prehistoric (Aurignacian) mammoth ivory carving found in a cave in the Ach valley in Germany in 1979. Archaeologists have estimated it to have been fashioned approximately 32,000 to 38,000 years ago.[2][3][4] The distinctive pattern of Orion has been recognized in numerous cultures around the world, and many myths have been associated with it. It has also been used as a symbol in the modern world. The Babylonian star catalogues of the Late Bronze Age name Orion MULSIPA.ZI.AN.NA,[note 1] "The Heavenly Shepherd" or "True Shepherd of Anu" - Anu being the chief god of the heavenly realms.[5] The Babylonian constellation was sacred to Papshukal and Ninshubur, both minor gods fulfilling the role of 'messenger to the gods'. The stars of Orion were associated with Osiris, the sun-god of rebirth and the afterlife, by the ancient Egyptians.[7][8][9] The Armenians identified their forefather Hayk with Orion. In J.

Betelgeuse Coordinates: 05h 55m 10.3053s, +07° 24′ 25.426″ The star is classified as a red supergiant of spectral type M2Iab and is one of the largest and most luminous observable stars. If Betelgeuse were at the center of the Solar System, its surface would extend past the asteroid belt, possibly to the orbit of Jupiter and beyond, wholly engulfing Mercury, Venus, Earth and Mars. In 1920, Betelgeuse became the second star (after the Sun) to have the angular size of its photosphere measured. Observational history[edit] Nascent discoveries[edit] The variation in Betelgeuse's brightness was first described in 1836 by Sir John Herschel, when he published his observations in Outlines of Astronomy. In 1920, Albert Michelson and Francis Pease mounted a 6-meter interferometer on the front of the 2.5-meter telescope at Mount Wilson Observatory. Imaging breakthroughs[edit] Recent studies[edit] Visibility[edit] Parallax[edit]

Rigel Although Rigel has the Bayer designation "beta", it is almost always brighter than Alpha Orionis (Betelgeuse). Since 1943, the spectrum of this star has served as one of the stable anchor points by which other stars are classified.[13] Visibility[edit] Rigel is the third most inherently luminous first magnitude star after Deneb and Betelgeuse. Rigel has a color index (B–V) of −0.03, meaning it appears white or lightly blue-white.[citation needed] Culminating at midnight on December 12, and at 9 pm on January 24, Rigel is most visible in winter evenings in the northern hemisphere and summer in the southern.[15] In the southern hemisphere, Rigel is the first bright star of Orion visible as the constellation rises.[16] Properties[edit] Rigel is a variable supergiant, the variability being caused by stellar pulsations similar to those of Deneb, the prototype of the class of Alpha Cygni pulsating stars. Space photometry[edit] Computer generated image of Rigel compared to the Sun (to scale)

Orion Nebula The Orion Nebula is one of the most scrutinized and photographed objects in the night sky, and is among the most intensely studied celestial features.[8] The nebula has revealed much about the process of how stars and planetary systems are formed from collapsing clouds of gas and dust. Astronomers have directly observed protoplanetary disks, brown dwarfs, intense and turbulent motions of the gas, and the photo-ionizing effects of massive nearby stars in the nebula. Physical characteristics[edit] Discussing the location of the Orion Nebula, what is seen within the star-formation region, and the effects of interstellar winds in shaping the nebula. Amateur image of the Orion Nebula taken with a DSLR camera. The constellation of Orion with the Orion Nebula (lower middle). The nebula is visible with the naked eye even from areas affected by some light pollution. Coloration[edit] Observers have long noted a distinctive greenish tint to the nebula, in addition to regions of red and of blue-violet.

Messier 43 Messier 43 (also known as M43, De Mairan's Nebula, and NGC 1982) is an H II region in the Orion constellation. It was discovered by Jean-Jacques Dortous de Mairan before 1731. The De Mairan's Nebula is part of the Orion Nebula, separated from the main nebula by a lane of dust. Coordinates: 05h 35.6m 00s, −05° 16′ 00″ Messier 78 M78 is the brightest diffuse reflection nebula of a group of nebulae that include NGC 2064, NGC 2067 and NGC 2071. This group belongs to the Orion Molecular Cloud Complex and is about 1,600 light years distant from Earth. M78 is easily found in small telescopes as a hazy patch and involves two stars of 10th magnitude. These two stars, HD 38563A and HD 38563B, are responsible for making the cloud of dust in M78 visible by reflecting their light. About 45 variable stars of the T Tauri type, young stars still in the process of formation as well as some 17 Herbig–Haro objects are known in M78. See also[edit] Messier 78 in fiction External links[edit] Coordinates: 05h 46.7m 00s, +00° 03′ 00″

The Hunter and the Bull My astronomy posts are based on what I talk about each week at Carter Observatory during planetarium shows and telescope viewing sessions. Much of the information is gleaned from the monthly summaries provided by the excellent Alan Gilmore at the University of Cantebury’s Mt John Observatory which can be accessed (for April) here: Personally I remember the main stars, and their colours an then use imaginary lines to navigate the sky, unfortunately this is not particularly well facilitated by the currently available star chats (which are still great though), visible on the right, so I will be editing small portions of the star charts, to allow colour comparison and for general ’prettyness’ (and also to teach myself Inkscape – BTW if you would like to similarly learn here‘s a nice place to start!) Orion’s Belt is a great way to navigate and memorize his part of the sky. Taurus, the Bull Crab Nebula (M1) - False Coloured image