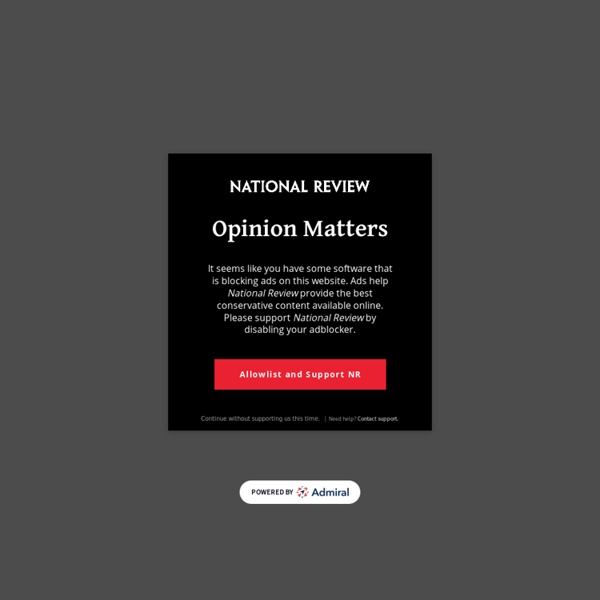 “You could have said that yesterday,” a friend wrote on social media, slapping down someone who was inveighing against the alleged racism of an accomplished sports figure who had died a few hours earlier. “You could have said it tomorrow.” Out of respect, we honor the dictum “Speak no ill of the dead” — for a day. Mourning, we might extend the period to months, or even years, but to maintain that attitude in perpetuity would mean that we suspended forever our judgment of precedents: We could never criticize any action if it was taken by someone who, being human, went on to die. Pamela Geller and the participants who were targeted by gunmen at the “Draw Muhammad” event she organized outside Dallas earlier this month are still very much living, thank God. In discussing the aborted atrocity, some of her defenders have insisted, however, that she merited the “Nil nisi bonum” treatment all the same. “Ah, but they are more logical than they know,” he continued; “they are only logical slowly.

Chemical weapons in Syria: A huge distraction from conventional war crimes Diplomatic circles are once again abuzz with rumours regarding a possible US military intervention in Syria. But not to protect the civilians of Eastern Ghouta on the outskirts of Damascus, who have been under siege for years and who are being killed by the hundreds as distressing mainstream media images have recently shown. Instead, the purported intervention would come in response to repeated allegations of chemical weapons being used in Ghouta, which the UN High Commissioner of Human Rights says killed two children in 2018. This alone raises a number of questions concerning the manipulation of the issue of chemical weapons in the Syrian conflict for political and diplomatic ends. A turning point As such, all of the actors involved in the Syrian conflict are trying to spin the question of chemical weapons to promote their own interests.

How Aviya Kushner Rediscovered the Bible at the University of Iowa In August 2002, Aviya Kushner left Jerusalem, where she had been a correspondent for the Jerusalem Post, returned to her parents’ home in Monsey, New York, and then drove a thousand miles west to Iowa City to begin an MFA program in nonfiction writing. She left with just one name in her pocket: Marilynne Robinson. The essayist and novelist usually taught classes on 19th-century literature, and in her first year Kushner took one. But in Kushner’s second year, Robinson chose to devote both semesters to teaching the Bible.

untitled WikimediaHe has been called the "slum pope" and "a pope for the poor." And indeed, it's true that Pope Francis, leader to 1.3 billion Roman Catholics, speaks often of those in need. He's described the amount of poverty and inequality in the world as "a scandal" and implored the Church to fight what he sees as a "culture of exclusion." What ISIS Really Wants What is the Islamic State? Where did it come from, and what are its intentions? The simplicity of these questions can be deceiving, and few Western leaders seem to know the answers. In December, The New York Times published confidential comments by Major General Michael K. Syria war: WHO demands access to 'chemical attack site' Image copyright AFP Photo/ HO/ Douma City Co-Ordination Committee The World Health Organization (WHO) has demanded "unhindered access" to Douma in Syria, to check reports from its partners that 500 people have been affected by a chemical attack there. The Syrian government denies being behind any use of chemical weapons.

Saying It Has Nothing to Do with Terrorism Is a Lie EDITOR’S NOTE: The following is Jonah Goldberg’s weekly “news”letter, the G-File. Subscribe here to get the G-File delivered to your inbox on Fridays. Dear Reader (Including those of you stunned by the news that Charlie Sheen has a sexually transmitted disease. Assad takes control of town hit by chemical attack; Russian military police deployed - Syria Syrian government forces have taken full control over the town of Douma, the last rebel stronghold in the eastern Ghouta enclave outside Damascus, Russian news agencies reported on Thursday, citing a Russian military official. "The raised state flag over a building in the town of Douma has heralded the control over this location and therefore over the whole of eastern Ghouta," Major-General Yuri Yevtushenko, head of the Russian peace and reconciliation center in Syria, was quoted as saying. >> The Preventable War Crime: How the West Failed to Prevent One Syrian Chemical Attack After Another | Analysis <<

Kesha, Chained Woman Kesha is a chained woman. If you think comparing the pop singer to agunot—the unfortunate Jewish women whose husbands refuse to grant them a get, or religious divorce—is a bit much, consider the singer’s sorrows. In 2005, Kesha, then a senior in high school, met Lukasz Guttwald, or Dr. Luke. The producer had already written Kelly Clarkson two hit songs—“Since U Been Gone” and “Behind These Hazel Eyes”—and other pop meteors on the rise, including Pink and Avril Lavigne, were in his orbit.

Statement by Secretary James N. Mattis on Syria > U.S. DEPARTMENT OF DEFENSE > News Release View Good evening. As the world knows, the Syrian people have suffered terribly under the prolonged brutality of the Assad regime. On April 7th, the regime decided to again defy the norms of civilized people, showing callous disregard for international law by using chemical weapons to murder women, children and other innocents. Anti-Zionism Is Anti-Semitism. Get Over It. Is anti-Zionism any different from anti-Semitism? The question is probably the most accurate seismograph we’ve got to measure where one stands on the ever-tremorous political grounds we all walk when we talk about Israel. Not that there’s necessarily any right or wrong answer; civil, well-meaning people can make arguments on both ends.