Into Thy Word Ministries 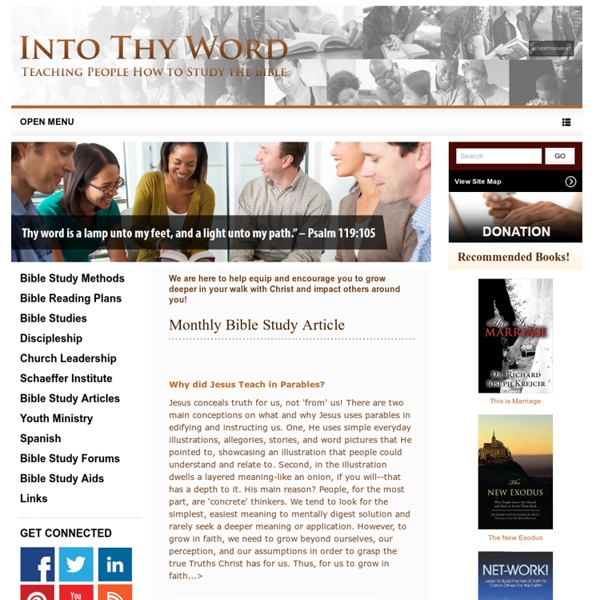 Iconoclasm "Triumph of Orthodoxy" over iconoclasm under the Byzantine empress Theodora. Late 14th – early 15th century icon. Iconoclasm[Note 1] is the destruction of religious icons and other images or monuments for religious or political motives. In time, the word, usually in the adjectival form, has also come to refer to aggressive statements or actions against any well-established status quo. It is a frequent component of major political or religious changes. The term does not generally encompass the specific destruction of images of a ruler after his death or overthrow (damnatio memoriae). Iconoclasm may be carried out by people of a different religion, but is often the result of sectarian disputes between factions of the same religion. Religious iconoclasm[edit] Byzantine era[edit] In the Eastern Roman (Byzantine) Empire, government-led iconoclasm began with Byzantine Emperor Leo III, following what seems to have been a long period of rising opposition to the use or misuse of images. ...

Topical Bible: Browse (OpenBible.info) Jesus's Kingdom Versus Muhammad's Kingdom (IS ISIS ISLAMIC? Part 1) IS ISIS ISLAMIC? — Part 1 By Silas Jesus’s arrest was the second in a series of pivotal events that led directly to His death. A short time later Jesus stated: “My kingdom is not of this world. Jesus did not intend to set up a physical kingdom. There was another kingdom Jesus taught about: the “kingdom of God.” Note however, even after His resurrection His disciples wanted and expected an established physical kingdom (Acts 1:7). Jesus instructed His disciples extensively about the kingdom of God because He desired that it be established and fulfilled in their lives. As God ruled in people’s hearts and minds they changed. During the next few centuries Christianity was persecuted harshly but it spread throughout the Roman Empire. Why didn’t Jesus instruct His followers to establish a physical kingdom on earth? Why didn’t Jesus instruct His disciples to establish a theocracy or an ecclesiocracy? “What could go wrong?” How shameful. Yes, “What could go wrong?” Key articles are: Jihad Muhammad b.

AP* Study Notes - Free AP Notes Cleaver and Conundrums – Why I Don’t Do Women’s Retreats | HEvencense Update: 6/13/08 It’s been eight months since this thread was originally posted and time for an update. I plan to launch a series exploring “Christian femininity” (”Proverbs 31 and beyond”) in the near future. While the meme doesn’t intend, purport or presume to be the final word – or even an exhaustive rendering of the subject – hopefully it’ll generate some additional thinking, musing, digging and growing. “Some Total” gets us started. Tis the season for planning this year’s women’s retreat.  In my experience, women’s retreats (as well as most “women’s ministry”) usually serve up the Christian version of lite beer: half the calories with half the taste.  The average women’s retreat doesn’t engage my mind, which gravitates more toward academic and scholarly pursuits.  An over-emphasis on emotions.  Weekend themes of “getting them grounded in the Word” and “growing in Jesus” and such.  Retreats billed as “ya’ll come” that focus on young married women with kids.  Logistics. 1. 2. 3.

50 Free Resources That Will Improve Your Writing Skills - Smashing Magazine Advertisement Today, too many websites are still inaccessible. In our new book Inclusive Design Patterns, we explore how to craft flexible front-end design patterns and make future-proof and accessible interfaces without extra effort. Hardcover, 312 pages. Effective writing skills are to a writer what petrol is to a car. Of course, effective writing requires a good command of the language in which you write or want to write. Further Reading on SmashingMag: Link We collected over 50 useful and practical tools and resources that will help you to improve your writing skills. 1. Use English Punctuation Correctly6 A quick and useful crash course in English punctuation. HyperGrammar7 An extensive electronic grammar course at the University of Ottawa’s Writing Centre. Grammar Girl8 Mignon Fogarty’s quick and dirty tips for better writing. English Style Guide – Economist16 This guide is based on the style book which is given to all journalists at The Economist. 2. Dr. 3. 4. Practical tips Link 5.

Dispensationalism As a system, dispensationalism is expounded in the writings of John Nelson Darby (1800–82) and the Plymouth Brethren movement,[1]:10 and propagated through works such as Cyrus Scofield's Scofield Reference Bible. The theology of dispensationalism consists of a distinctive eschatological end times perspective, as all dispensationalists hold to premillennialism and most hold to a pretribulation rapture. Dispensationalists believe that the nation of Israel is distinct from the Christian Church,[2]:322 and that God has yet to fulfill his promises to national Israel. These promises include the land promises, which in the future world to come result in a millennial kingdom and Third Temple where Christ, upon his return, will rule the world from Jerusalem[3] for a thousand years. Estimates of the number of people who hold Dispensationalist beliefs vary between 5 and 40 million in the United States alone.[7] [8] [9] Concepts[edit] Progressive revelation[edit] Dispensations[edit] Eschatology[edit]

Bible Questions Answered The Life of Dorothy Day | March 14, 2014 | Religion & Ethics NewsWeekly Read excerpts from The Duty of Delight: The Diaries of Dorothy Day edited by Robert Ellsberg DEBORAH POTTER, correspondent: On the Lower East Side of Manhattan, just a few blocks from the Bowery, the line forms early outside St. Joseph House. Four times a week, volunteers make gallons of soup from scratch and each day feed more than a hundred men. MICHAEL GREENBERG (Catholic Worker Volunteer): People here personally emulate Christ. POTTER: Donations keep the soup line going. ROBERT ELLSBERG (Publisher, Orbis Books): She was very young. POTTER: Robert Ellsberg got to know Day near the end of her life and edited her letters and diaries. ELLSBERG: People have an idea that she was somehow sort of scary, because she looks so serious in so many pictures. POTTER: In her late 20s, Day lived with a fellow radical whom she adored but who opposed both marriage and religion. Dorothy Day interview in 1971: If your brother is hungry, you feed him. Bishops: Aye. Moderator: Opposed?

Theology An Introduction to the Doctrines of the Christian Faith The pages listed below were written seeking to accurately express the teaching of the Bible on each subject in an "introduction and overview" format. As such, each study begins with a detailed summary of the teaching outlined below, and a listing of related studies is included so that you can follow from one study logically onto another. The Bible on God: (top) The Bible on Mankind: (top) The Bible on Salvation: (top) The Atonement (the work Jesus did to save us) The 'salvation stream': Predestination (election to be saved) Conversion and the Christian Life (faith and repentance) Justification (God views us as righteous) Adoption (becoming children of God) Sanctification (becoming more like God) Glorification (receiving 'resurrection bodies') The Bible on the Future (top) References (top) Many books were helpful in the completion of the theology section of this site, but these especially: -

The Lonely Man of Faith Bible Verses by Topic - Famous Scriptures and Quotes Ancient Days :: Who Were the Sons of God in Genesis 6? :: by David Livingston In Genesis 6:1-8 we read about some persons who may be a pre-Flood link between the Bible and the cultures of the ancient Near East. They are the "sons of the gods." The biblical reference to them should have some relationship with historical fact. If so, we should be able to lift these early chapters of Genesis out of what may be to some a foggy mysticism, and make connections with extra-biblical historical accounts. Suggested Meanings for the "sons of god" Who actually were the "sons of god?" Another interpretation is that they were the sons of Seth, the godly line. The third possibility is that of rabbinical Jewish interpretation. Perhaps a combination of the first and third is the best explanation. A New Interpretation A new interpretation has been suggested by Meredith Kline (in The Westminster Theological Journal, May 1962). Thus, the king is divine, he is god, and manifested himself as such especially on the New Year Festival. Divine Kingship What is it? How Divine Kingship Works 1.