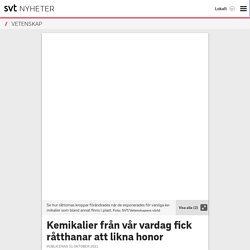 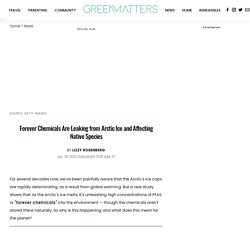 But a new study shows that as the Arctic's ice melts, it's unleashing high concentrations of PFAS or "forever chemicals" into the environment — though the chemicals aren't stored there naturally. So why is this happening, and what does this mean for the planet? Midnight sky - Poland’s coal-fired home heating creates widespread pollution. SOME COUNTRIES’ borders are visible from space. 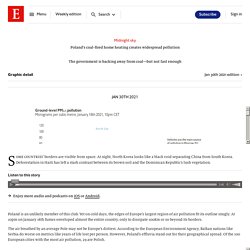 At night, North Korea looks like a black void separating China from South Korea. Deforestation in Haiti has left a stark contrast between its brown soil and the Dominican Republic’s lush vegetation. Enjoy more audio and podcasts on iOS or Android. Dead Bird Nests Contain 36 Different Pesticides, Including DDT. In Brussels and Florence, people began to express concern over the rising finds of dead newborn birds (tits) in their nests. 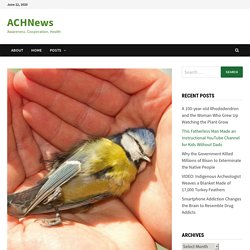 When these concerned people notified the bird conservation association Vogelbescherming Vlaanderen and the ecological gardening association Velt, they began a crowd-funded investigation. Over 1000 people sent in dead tits and nests, which were analyzed and a report was published with shocking results. “We found a total of 36 different pesticides in 95 mesh nests,” Geert Gommers, a pesticide expert said in a statement. The birds’ nests revealed traces of 36 different fungicides, herbicides, insecticides and biocides. 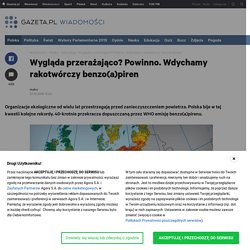 Yale Study Shows Air Pollution Causes “Huge” Reduction in Intelligence. (TT) — A study conducted in China by researchers from the Yale School of Public Health in the United States has shown that air pollution causes a “huge” reduction in intelligence. 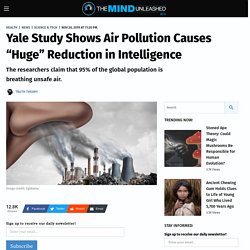 While the research did take place in China, which is known to have very serious pollution problems, the researchers suggest that 95% of the global population is breathing unsafe air at levels that would cause a significant reduction in intelligence. Data collected in the study, which was published in the journal Proceedings of the National Academy of Sciences, showed that high pollution levels were correlated with lower test scores in language and math. It was estimated that this reduction in intelligence had a similar impact as losing a year of education. Exxon methane leak at fracking well lasted for 20 days. 20 Signs China's Pollution Has Reached Apocalyptic Levels. Veterinary drugs are wreaking havoc on wildlife worldwide.

Radiation in Parts of Marshall Islands is Higher Than Chernobyl. Radiation levels in some regions of the Marshall Islands in the central Pacific, where the United States conducted nuclear tests during the Cold War, are far higher than in areas affected by the Chernobyl and Fukushima nuclear disasters, according to new research from Columbia University. 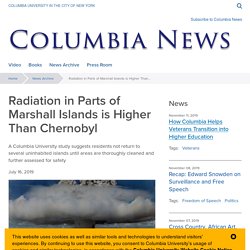 Three studies published July 15 in Proceedings of the National Academy of Sciences (PNAS) by a Columbia research team, led by Emlyn Hughes and Malvin Ruderman from the Columbia Center for Nuclear Studies, showed that the concentration of nuclear isotopes on some of the islands was well above the legal exposure limit established in agreements between the U.S. and Republic of the Marshall Islands. The studies measured soil samples, ocean sediment and a variety of fruit. Nearly 70 nuclear bombs the United States detonated between 1946 and 1958 left widespread contamination on the islands, a chain of atolls halfway between Australia and Hawaii. 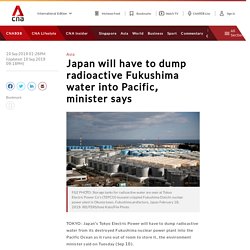 Tokyo Electric, or Tepco, has collected more than 1 million tonnes of contaminated water from the cooling pipes used to keep fuel cores from melting since the plant was crippled by an earthquake and tsunami in 2011. "The only option will be to drain it into the sea and dilute it," the minister, Yoshiaki Harada, told a news briefing in Tokyo. "The whole of the government will discuss this, but I would like to offer my simple opinion. " READ: Japan's Tepco to submit decommissioning plan regarding five reactors Tepco was not in a position to decide what to do but would follow the policy once the government made a decision, a spokesman for the utility said. 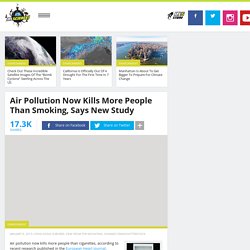 A new study led by the Max Planck Institute for Chemistry suggests that air pollution is responsible for nearly 9 million premature deaths each year – almost double the number previously estimated. Past studies have estimated the number of extra deaths globally to be 4.5 million, however, a new approach has shown that air pollution could be responsible for as many as 8.8 million extra deaths. In Europe alone, it’s believed around 790,000 people die prematurely due to poor air quality. “To put this into perspective, this means that air pollution causes more extra deaths a year than tobacco smoking, which the World Health Organization estimates was responsible for an extra 7.2 million deaths in 2015,” study co-author Professor Thomas Münzel, from the Department of Cardiology at the University Medical Centre Mainz in Germany, said in a statement.

The World's Recycling Is in Chaos. Here's What Has to Happen. Air pollution is the world's top killer, according to new research. Every Single Seal, Dolphin, And Whale In One Study Found To Have Ingested Plastic. In a study of dead marine mammals washed up on the shores of Britain, researchers say they were “shocked” to find that every single animal they looked at contained microplastics in their guts. 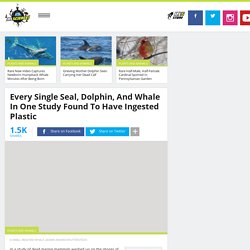 Publishing their work in Scientific Reports, the team of marine mammal and plastic experts examined the digestive tracts of 50 animals from 10 species of dolphins, seals, and whales. Tiny, broken down pieces of plastics less than 5 millimeters in length were found in all of them, with their stomachs generally containing a greater number than the intestines.

"It's shocking – but not surprising – that every animal had ingested microplastics," said lead author Sarah Nelms in a statement. Investigation Reveals Tyson Foods as #1 Culprit in Largest "Dead Zone" on Earth. Nearly 9000 square-miles of ocean along the Gulf Coast is uninhabitable by marine life. Loaded with agricultural toxins and devoid of oxygen, it’s the largest “dead zone” in US history, and last summer it got even bigger. Study Shows Roundup and Fungicide Attract Bees, Then Kill Them. Scientists Worry About Implications for Global Food Supply. Officials Warn: Fukushima Has Now Contaminated 1/3 Of The World's Oceans. The International Atomic Energy Agency (IAEA), seeking to promote the peaceful use of Nuclear Power, in 2011 established with the Regional Cooperative Agreement (RCA) Member States, a joint IAEA Technical Cooperation (TC) project in the region of the Pacific Ocean.

It was established after the Fukushima disaster when a tsunami caused by a major earthquake on 11 March 2011, disabled the power supply and cooling of three Fukushima Daiichi reactors, causing a nuclear accident. As a result a large quantity of radioactive material was admitted into the Pacific Ocean. Of no surprise, this caused great concern to countries based around the Pacific Ocean due to the potential economic and environmental implications.

The TC project’s aim was therefore, to monitor the presence of radioactive substances in the marine environment. ŚWIAT WEDŁUG MONSANTO. Four Corners : ABC iview. First North Carolina Got a Hurricane. Then a Pig Poop Flood. Now It’s a Coal Ash Crisis. Investigation Reveals Tyson Foods as #1 Culprit in Largest "Dead Zone" on Earth. Fukushima Has Now Contaminated Over 1/3 Of The Worlds Oceans (And It’s Getting Worse) 10 Shockingly Destructive Products Made By Monsanto. Monsanto have a huge monopoly on on a number of vastly different areas of the global market, but have you ever asked yourself just how trustworthy their products are? The worrying thing is that many Monsanto products contain harmful ingredients and are made for pure profit rather than the well-being of the consumer.

The company specializes in agrochemical products, and their reach means their products are used on many of the items you will find in any regular fruit and veg section of the supermarket. Sadly, the ingredients list for their products that are sprayed in large doses on the produce that we eat contain many harmful chemicals. Plastic fibres found in tap water around the world, study reveals. Microplastic contamination has been found in tap water in countries around the world, leading to calls from scientists for urgent research on the implications for health.

Scores of tap water samples from more than a dozen nations were analysed by scientists for an investigation by Orb Media, who shared the findings with the Guardian. Overall, 83% of the samples were contaminated with plastic fibres. The US had the highest contamination rate, at 94%, with plastic fibres found in tap water sampled at sites including Congress buildings, the US Environmental Protection Agency’s headquarters, and Trump Tower in New York. Lebanon and India had the next highest rates. European nations including the UK, Germany and France had the lowest contamination rate, but this was still 72%. Mutant Apes Discovered In Uganda. Argentina: The Country That Monsanto Poisoned. Chemical Pollution Found in Animals Living In The Deepest Oceans. MIT Scientist Uncovers Link Between Glyphosate, GMOs And The Autism Epidemic. THIS is The Real Reason Wheat is Toxic (And It’s NOT the gluten!) - Organic And Healthy. World Oceans Day 2016: Shocking photos of marine pollution around the planet.

World Oceans Day, marked every year on 8 June, aims to remind people of the huge role our oceans play in everyday life.

Den stora kvicksilverbluffen. Avfallsexperten Susanne Kummel satt i sin röda Toyota på väg hem till Orust när telefonen ringde. Everyone waited for it to be taken down. 150 million views later, it's still up. Watch it here. MIT Researcher’s New Warning: At Today’s Rate, Half Of All U.S. Children Will Be Autistic By 2025. You’ll Never Guess What Killed $3,000,000 Worth Of Horses. 32 Photos That Shows How Bad Pollution Has Become in China. Somebody Took a Picture of Beijing’s Skyline for a Year—and It’s Horrifying. The truth you're not being told about the Toledo water crisis in Ohio: Chemical agriculture poisoned the water - NaturalNews.com. What's Happening In The Skies Over This Canadian Town Is Creeping The Kids Right Out. 8 Foods Even The Experts Won’t Eat. Colony Collapse Disorder Is Not What You Think. There's No Way I'm Eating My Next Seafood Dinner Without Checking This Chart First. You May Want To Sit Down For This. Just Not On Your Couch. Or My Couch. Or Any Couch.

Curcumin attenuates neurotoxicity induced by fluoride: An in vivo evidence. Mass Dolphin Deaths Caused By Human Activity: How We May Be Compromising Immune Systems Of Marine Mammals. People Should Know About This Awful Thing We Do, And Most Of Us Are Simply Unaware. Everyone 'is now polluted' Toxic Chemical Ingredients in Cosmetics and Skin Care Products.