Reactions: Rates of Reaction. Factors Affecting Reaction Rates. Collision Theory I. Proposed by Max Trautz and William Lewis in the early 1900s, collision theory is an aspect of kinetic-molecular theory; it is strongly interconnected with chemical kinetics. 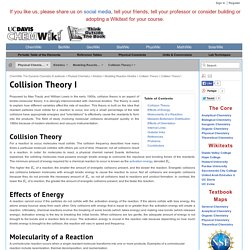 The theory is used to explain how different variables affect the rate of reaction. This theory is built on the idea that reactant particles must collide for a reaction to occur, but only a small percentage of the total collisions have appropriate energies and "orientations" to effectively cause the reactants to form into the products. The field of study involving molecular collisions developed quickly in the 1980s because of modern electronic and vacuum instrumentation. Collision Theory For a reaction to occur, molecules must collide. Changes in Temperature. Le Chatelier's Principle.

Using Le Chatelier's Principle with a change of temperature For this, you need to know whether heat is given out or absorbed during the reaction. 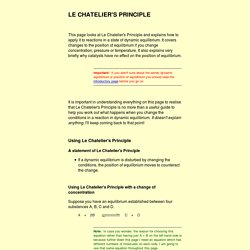 Assume that our forward reaction is exothermic (heat is evolved): This shows that 250 kJ is evolved (hence the negative sign) when 1 mole of A reacts completely with 2 moles of B. For reversible reactions, the value is always given as if the reaction was one-way in the forward direction. The effect of temperature on rates of reaction. You can mark the position of activation energy on a Maxwell-Boltzmann distribution to get a diagram like this: Only those particles represented by the area to the right of the activation energy will react when they collide. 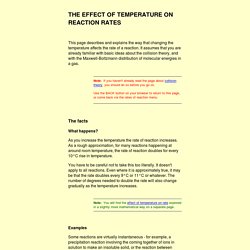 The great majority don't have enough energy, and will simply bounce apart. To speed up the reaction, you need to increase the number of the very energetic particles - those with energies equal to or greater than the activation energy. Increasing the temperature has exactly that effect - it changes the shape of the graph. In the next diagram, the graph labelled T is at the original temperature. An introduction to chemical equilibria. A more formal look at dynamic equilibria Thinking about reaction rates This is the equation for a general reaction which has reached dynamic equilibrium: How did it get to that state? 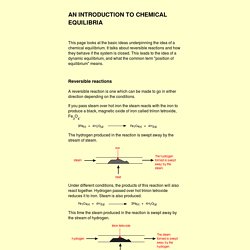 Let's assume that we started with A and B. At the beginning of the reaction, the concentrations of A and B were at their maximum. As A and B react, their concentrations fall. In the beginning, there isn't any C and D, so there can't be any reaction between them. The Rates of Chemical Reactions. 1422-Chapt-15-Thermodynamics.pdf. LAWS OF THERMODYNAMICS. Precipitation Reactions. Write the net ionic equation for the potentially double displacement reactions. 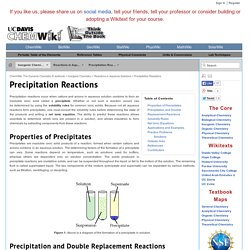 Make sure to include the states of matter and balance the equations. Solutions 1. Free Radical Reactions — Master Organic Chemistry. With rare exceptions, until now every reaction we’ve discussed (acid-base, substitution, elimination, addition) has involved the formation of bonds between an electron pair donor (Lewis base) and an electron pair acceptor (Lewis acid) or the breakage of bonds to generate the same [this is called “heterolytic” cleavage, by the way, since one bonding partner gets two electrons and the other gets zero]. 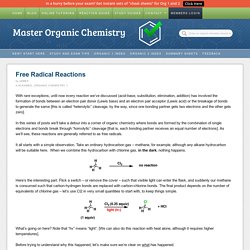 In this series of posts we’ll take a detour into a corner of organic chemistry where bonds are formed by the combination of single electrons and bonds break through “homolytic” cleavage [that is, each bonding partner receives an equal number of electrons]. As we’ll see, these reactions are generally referred to as free radicals. It all starts with a simple observation. Take an ordinary hydrocarbon gas – methane, for example, although any alkane hydrocarbon will be suitable here. When we combine this hydrocarbon with chlorine gas, in the dark, nothing happens. Here’s the interesting part. Chemical Reactions (Chemistry) How to Balance Chemical Equations: 10 Steps. Balancing chemical equations. Chemical Reactions. Concept Review with Key Terms. 4.1 Some Electrical Properties of Aqueous Solutions—Soluble ionic compounds are completely dissociated into ions in aqueous solution and are therefore strong electrolytes. 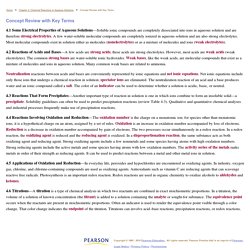 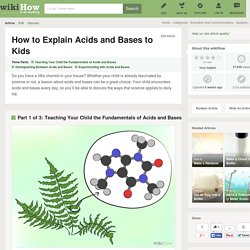 Tell your child that everything around us is made up of elements and atoms and molecules. As an example, use water. Explain to your child that water’s symbol is H2O. <img alt="Explain Acids and Bases to Kids Step 5 Version 2.jpg" src=" width="670" height="503">5Emphasize safety. Kids science: Acids and Bases. Science >> Chemistry for KidsScience >> Chemistry for Kids Acids and bases are two special kinds of chemicals. 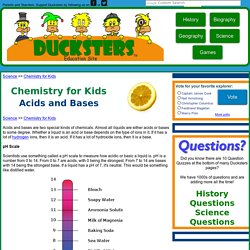 Almost all liquids are either acids or bases to some degree. Whether a liquid is an acid or base depends on the type of ions in it. If it has a lot of hydrogen ions, then it is an acid. If it has a lot of hydroxide ions, then it is a base. pH Scale Scientists use something called a pH scale to measure how acidic or basic a liquid is. pH is a number from 0 to 14. Chembond. Chemical Bonding and Formula Writing.