Gases and pollution and laws 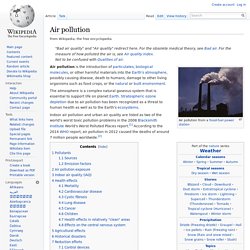 For the obsolete medical theory, see Bad air. For the measure of how polluted the air is, see Air quality index. Air pollution is the introduction of particulates, biological molecules, or other harmful materials into the Earth's atmosphere, possibly causing disease, death to humans, damage to other living organisms such as food crops, or the natural or built environment. 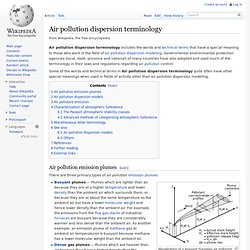 Governmental environmental protection agencies (local, state, province and national) of many countries have also adopted and used much of the terminology in their laws and regulations regarding air pollution control. Some of the words and technical terms in Air pollution dispersion terminology quite often have other special meanings when used in fields of activity other than air pollution dispersion modeling. Air pollution emission plumes[edit] Visualization of a buoyant Gaussian air pollutant dispersion plume Buoyant plumes — Plumes which are lighter than air because they are at a higher temperature and lower density than the ambient air which surrounds them, or because they are at about the same temperature as the ambient air but have a lower molecular weight and hence lower density than the ambient air. Henry's law.

"At a constant temperature, the amount of a given gas that dissolves in a given type and volume of liquid is directly proportional to the partial pressure of that gas in equilibrium with that liquid. 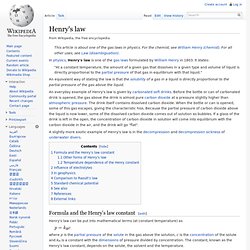 " An equivalent way of stating the law is that the solubility of a gas in a liquid is directly proportional to the partial pressure of the gas above the liquid. An everyday example of Henry's law is given by carbonated soft drinks. Before the bottle or can of carbonated drink is opened, the gas above the drink is almost pure carbon dioxide at a pressure slightly higher than atmospheric pressure. The drink itself contains dissolved carbon dioxide. When the bottle or can is opened, some of this gas escapes, giving the characteristic hiss. Formula and the Henry's law constant[edit] Henry's law can be put into mathematical terms (at constant temperature) as carbon dioxide (CO2) : 29.41 L·atm/mol hydrogen (H2) : 1282.1 L·atm/mol.

Greenhouse gas. Gas in an atmosphere that absorbs and emits radiation within the thermal infrared range The greenhouse effect of solar radiation on the Earth's surface caused by greenhouse gases At current emission rates, temperatures could increase by 2 °C (3.6°F), which the United Nations' Intergovernmental Panel on Climate Change (IPCC) designated as the upper limit to avoid "dangerous" levels, by 2036.[14] Gases in Earth's atmosphere[edit] Non-greenhouse gases[edit] The major constituents of Earth's atmosphere, nitrogen (N2)(78%), oxygen (O2)(21%), and argon (Ar)(0.9%), are not greenhouse gases because molecules containing two atoms of the same element such as N2 and O2 have no net change in the distribution of their electrical charges when they vibrate, and monatomic gases such as Ar do not have vibrational modes. 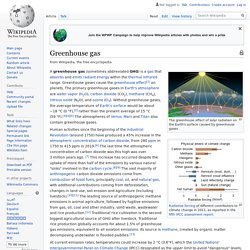 Partial pressure. Gay-Lussac's law. Gas blending. Gas blending is the process of mixing gases for a specific purpose where the composition of the resulting mixture is specified and controlled. 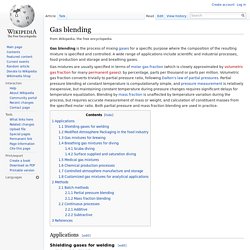 A wide range of applications include scientific and industrial processes, food production and storage and breathing gases. Applications[edit] Shielding gases for welding[edit] Main article: Shielding gas. Flue-gas emissions from fossil-fuel combustion. Flue-gas emissions from fossil-fuel combustion refers to the combustion-product gas resulting from the burning of fossil fuels.[1] Most fossil fuels are combusted with ambient air (as differentiated from combustion with pure oxygen). 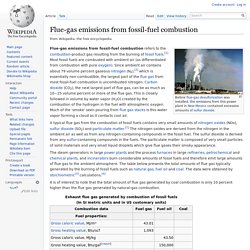 Soot. Emission of soot from a large diesel truck, without particle filters Soot /ˈsʊt/ is impure carbon particles resulting from the incomplete combustion of hydrocarbons. 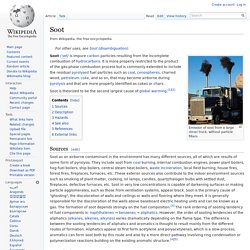 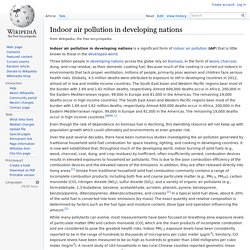 Three billion people in developing nations across the globe rely on biomass, in the form of wood, charcoal, dung, and crop residue, as their domestic cooking fuel. Because much of the cooking is carried out indoors in environments that lack proper ventilation, millions of people, primarily poor women and children face serious health risks. Globally, 4.3 million deaths were attributed to exposure to IAP in developing countries in 2012, almost all in low and middle income countries.

The South East Asian and Western Pacific regions bear most of the burden with 1.69 and 1.62 million deaths, respectively. Almost 600,000 deaths occur in Africa, 200,000 in the Eastern Mediterranean region, 99,000 in Europe and 81,000 in the Americas. Maxwell–Boltzmann distribution. In physics, particularly statistical mechanics, the Maxwell–Boltzmann distribution or Maxwell speed distribution describes particle speeds in idealized gases where the particles move freely inside a stationary container without interacting with one another, except for very brief collisions in which they exchange energy and momentum with each other or with their thermal environment. 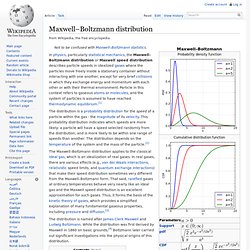 Particle in this context refers to gaseous atoms or molecules, and the system of particles is assumed to have reached thermodynamic equilibrium.[1] The Maxwell–Boltzmann distribution applies to the classical ideal gas, which is an idealization of real gases. In real gases, there are various effects (e.g., van der Waals interactions, relativistic speed limits, and quantum exchange interactions) that make their speed distribution sometimes very different from the Maxwell–Boltzmann form.

The distribution is named after James Clerk Maxwell and Ludwig Boltzmann. Distribution function[edit] where . . Where: Purity (gas) The purity of gas is an indication of the amount of other gases it contains. 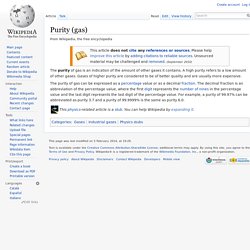 A high purity refers to a low amount of other gases.

Motor vehicle emissions. Typical appearance of car exhaust on a correctly maintained and warmed car. 99.4% of pollutant gases are invisible[1] Motor vehicle emissions are composed of the by-products that comes out of the exhaust systems or other emissions such as gasoline evaporation. Great Smog. The Great Smog of '52 or Big Smoke[1] was a severe air-pollution event that affected London during December 1952. A period of cold weather, combined with an anticyclone and windless conditions, collected airborne pollutants mostly from the use of coal to form a thick layer of smog over the city.

It lasted from Friday 5 to Tuesday 9 December 1952, and then dispersed quickly after a change of weather. Although it caused major disruption due to the effect on visibility, and even penetrated indoor areas, it was not thought to be a significant event at the time, with London having experienced many smog events in the past, so-called "pea soupers". Government medical reports in the following weeks estimated that up until 8 December 4,000 people had died prematurely and 100,000 more were made ill because of the smog's effects on the human respiratory tract.

Knudsen gas. Tropospheric ozone. Seasonal average vertical columns of tropospheric ozone in Dobson units over the period 1979 to 2000. Flue. A seven-flue chimney in a four storey Georgian house in London, showing alternative methods of sweeping Heat retention[edit] Flues are adjustable and are designed to release noxious gases to the atmosphere. Gas. Avogadro's law. Criteria air contaminants. Criteria air contaminants (CAC), or criteria pollutants, are a set of air pollutants that cause smog, acid rain, and other health hazards. CACs are typically emitted from many sources in industry, mining, transportation, electricity generation and agriculture. Gas laws.