What is clean coal technology? Coal is the dirtiest of all fossil fuels.

When burned, it produces emissions that contribute to global warming, create acid rain and pollute water. With all of the hoopla surrounding nuclear energy, hydropower and biofuels, you might be forgiven for thinking that grimy coal is finally on its way out. But coal is no sooty remnant of the Industrial Revolution -- it generates half of the electricity in the United States and will likely continue to do so as long as it's cheap and plentiful [source: Energy Information Administration]. Clean coal technology seeks to reduce harsh environmental effects by using multiple technologies to clean coal and contain its emissions. Coal Questions & Answers. What is the Sierra Club position on new coal technology?

If coal is to remain a part of our energy future, it must be mined responsibly, burned cleanly and guaranteed to not worsen global warming pollution. At this time, there is no existing coal technology that meets these standards, including Integrated Gasification Combined Cycle (IGCC) or carbon capture and sequestration (CCS).

If we don't build all these new coal-fired power plants now, won't we be setting ourselves up for rolling blackouts and jeopardizing our energy future? Coal is a very inefficient source of energy. In fact the average coal plant in the U.S. is only 33% efficient--that's a lot of wasted resources. The Myth of Clean Coal: Analysis. Update: On July 14, 2011, American Electric Power announced it would table plans to build a carbon capture and sequestration project at its Mountaineer Plant in West Virginia, which is mentioned in this article. 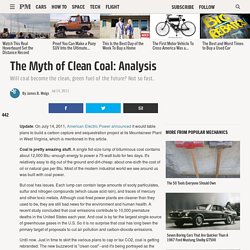 Coal is pretty amazing stuff. A single fist-size lump of bituminous coal contains about 12,000 Btu--enough energy to power a 75-watt bulb for two days. It's relatively easy to dig out of the ground and dirt-cheap: about one-sixth the cost of oil or natural gas per Btu. Most of the modern industrial world we see around us was built with coal power. Advertisement - Continue Reading Below But coal has issues. Until now. There's just one problem with this scenario: Coal will never be clean.

Carbon dioxide is not some minor byproduct of coal combustion. The Dirty Facts on "Clean Coal. #1: "Clean" Coal Kills People. 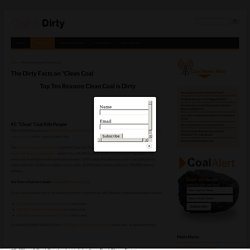 Water pollution from coal. Water Pollution from Coal includes negative health and environmental effects from the mining, processing, burning, and waste storage of coal, including acid mine drainage, thermal pollution from coal plants, acid rain, and contamination of groundwater, streams, rivers, and seas from heavy metals, mercury, and other toxins and pollutants found in coal ash, coal sludge, and coal waste.

Coal Mining Acid mine drainage Coal mine reclamation site leaching acid mine runoff in KY. Photo courtesy of ilovemountains.org. Acid mine drainage (AMD) refers to the outflow of acidic water from coal or metal mines, often abandoned ones where ore- or coal mining activities have exposed rocks containing the sulphur-bearing mineral pyrite. Mountaintop removal and streams. The Dirty Facts on "Clean Coal. Coal and jobs in the United States. Total coal-related jobs There are approximately 174,000 blue-collar, full-time, permanent jobs related to coal in the U.S.: mining (83,000), transportation (31,000), and power plant employment (60,000). 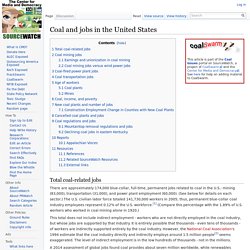 (See below for details on each sector.) The U.S. civilian labor force totaled 141,730,000 workers in 2005; thus, permanent blue-collar coal industry employees represent 0.12% of the U.S. workforce.[1] (Compare this percentage with the 1.89% of U.S. workers who worked in coal mining alone in 1920.) This total does not include indirect employment - workers who are not directly employed in the coal industry, but whose jobs are supported by that industry. It is entirely possible that thousands - even tens of thousands - of workers are indirectly supported entirely by the coal industry. 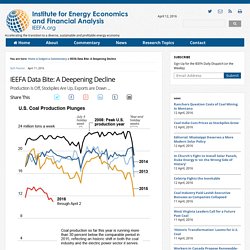 And weekly production estimates from the Energy Information Administration show that the decline has accelerated recently. The U.S. coal industry produced 11 million tons of coal in the seven days ended April 2— 38 percent less than in the comparable week in 2015, and only half the amount mined in the comparable week in 2008, the year of peak U.S. output. It is most likely among the lowest weekly output figures in decades. The pressures on production aren’t likely to end soon. In addition to the ongoing impact of low prices, bankruptcies and mine closures, year-end coal stockpiles at electric plants were the highest in 25 years, according to the Energy Information Administration, as the warmest winter on record for the U.S. was leading to lower than normal electric demand. 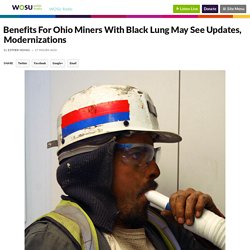 On Monday, Cira introduced a bill that mirrors a similar bill in West Virginia and was devised with the help of The United Mine Workers of America. It will expand the benefits available to miners with black lung and modernize the process for obtaining those benefits. Cira says Ohio is behind the curve when it comes to fairly compensating miners affected by the disease. "In Ohio you pretty much have to die before your spouse or your beneficiary who's still alive to get benefits. " Cira says miners who are temporarily and permanently affected by black lung would be able to receive economic assistance and benefits. 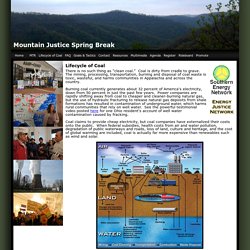 " Coal is dirty from cradle to grave. The mining, processing, transportation, burning and disposal of coal waste is toxic, wasteful, and harms communities in Appalachia and across the country. Burning coal currently generates about 32 percent of America's electricity, down from 50 percent in just the past few years. Power companies are rapidly shifting away from coal to cheaper and cleaner-burning natural gas, but the use of hydraulic fracturing to release natural gas deposits from shale formations has resulted in contamination of underground water, which harms rural communities that rely on well water.

See the powerful testimonial video posted here for one Ohio resident's account of well water contamination caused by fracking. Life-cycle study: Accounting for total harm from coal would add "close to 17.8¢/kWh of electricity generated" In a groundbreaking article to be released this month in the Annals of the New York Academy of Sciences, Dr. 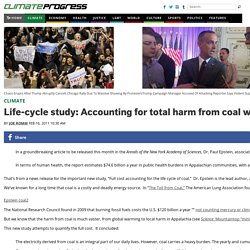 Paul Epstein, associate director of the Center for Health and the Global Environment at Harvard Medical School, details the economic, health and environmental costs associated with each stage in the life cycle of coal – extraction, transportation, processing, and combustion. These costs, between a third to over half a trillion dollars annually, are directly passed on to the public. In terms of human health, the report estimates $74.6 billion a year in public health burdens in Appalachian communities, with a majority of the impact resulting from increased healthcare costs, injury and death.

Emissions of air pollutants account for $187.5 billion, mercury impacts as high as $29.3 billion, and climate contributions from combustion between $61.7 and $205.8 billion. That’s from a news release for the important new study, “Full cost accounting for the life cycle of coal.” Dr. Hear! Epstein full%20cost%20of%20coal. Your Grandfather’s Coal Plant – The Clean Air Act’s Flawed Legacy. Ripple Effect. What a ride it's been the past 10 days. First, Pope Francis delivers his beautiful encyclical on climate change.

Then, the U.S. Supreme Court upholds the Affordable Care Act, aka Obamacare, and legalizes same-sex marriage in all 50 states. As a Great Lakes environmental writer, I'm moved and inspired by the pope's edict - not just what it means on the surface, but also because of what it means in the big picture to the growing importance of religion as a form of environmental communication. Each day, it seems, religion speaks more to people about the need for environmental stewardship. Pope Francis at the Vatican on June 24. For one of the best books on that subject - a topic that has long fascinated me - I refer you to Harvard University's famed entomologist-author Edward O. In it, Wilson makes a strong argument for how Earth's future depends on the ability of religion and science to put aside their longstanding differences - Darwin theories and all - and work together.

Poisoning-the-great-lakes. Lake Erie Facts & Information. Lake Erie Description by ODNR Find More Lake Erie facts here! Lake Erie is the incubator for the Great Lakes – the canary in the coal mine lake. Invasive species like the quagga/zebra mussels prospered first in the shallow water in the western basin of Lake Erie and Lake St. Clair. ClosingTheFloodgates-Final. Thermal pollution from coal plants. Thermal pollution is the degradation of water quality by any process that changes ambient water temperature. A common cause of thermal pollution is the use of water as a coolant by power plants and industrial manufacturers. When water used as a coolant is returned to the natural environment at a higher temperature, the change in temperature impacts organisms by (a) decreasing oxygen supply, and (b) affecting ecosystem composition.[1] When a power plant first opens or shuts down for repair or other causes, fish and other organisms adapted to particular temperature range can be killed by the abrupt rise in water temperature known as 'thermal shock': most aquatic organisms have developed enzyme systems that operate in only narrow ranges of temperature, and can be killed by sudden temperature changes that are beyond the tolerance limits of their metabolic systems.[1] Ecological effects.

Lake Erie has most mercury pollution in Great Lakes - Chronicle-Telegram. Coal Plant Water Pollution. Every year, coal-fired power plants dump millions of tons of toxic metals into our waterways. In fact, according to the Environmental Protection Agency, 72 percent of all toxic water pollution in the country comes from coal-fired power plants, making coal plants the number one source of toxic water pollution in the U.S.(1) What’s more, four out of five coal plants in the U.S. have no limits on the amount of toxics they are allowed to dump into our water.(2) Coal plants across the country are disposing of toxic heavy metals like arsenic, selenium, boron, cadmium, mercury, and lead in our waterways, polluting our drinking water, fishing areas, and local rivers and streams. Research has shown that exposure to these dangerous chemicals can lead to birth defects, cancer, and even death—meaning that limiting these pollutants will not only clean up our water, but will also save lives.