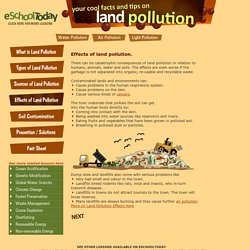 There can be catastrophic consequences of land pollution in relation to humans, animals, water and soils. The effects are even worse if the garbage is not separated into organic, re-usable and recyclable waste. Contaminated lands and environments can: Cause problems in the human respiratory system. Cause problems on the skin. Cause various kinds of cancers. The toxic materials that pollute the soil can get into the human body directly by: Coming into contact with the skin. Being washed into water sources like reservoirs and rivers.

Eating fruits and vegetables that have been grown in polluted soil. Breathing in polluted dust or particles. Dump sites and landfills also come with serious problems like Very bad smell and odour in the town. Landfills breed rodents like rats, mice and insects, who in-turn transmit diseases. Landfills in towns do not attract tourists to the town. Effects of Air Pollution on humans, plants and animals. What are the effects of air pollution? 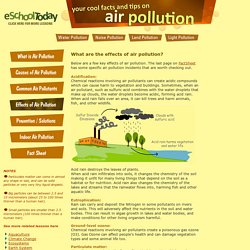 Below are a few key effects of air pollution. The last page on FactSheet has some specific air pollution incidents that are worth checking out. Acidification: Chemical reactions involving air pollutants can create acidic compounds which can cause harm to vegetation and buildings. Sometimes, when an air pollutant, such as sulfuric acid combines with the water droplets that make up clouds, the water droplets become acidic, forming acid rain. When acid rain falls over an area, it can kill trees and harm animals, fish, and other wildlife. Acid rain destroys the leaves of plants. Eutrophication: Rain can carry and deposit the Nitrogen in some pollutants on rivers and soils. Ground-level ozone: Chemical reactions involving air pollutants create a poisonous gas ozone (O3). Particulate matter: Air pollutants can be in the form of particulate matter which can be very harmful to our health.

The Effects: Environment. Algal blooms can reduce the ability of fish and other aquatic life to find food and can cause entire populations to leave an area or even die. 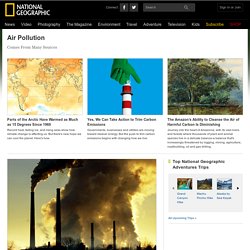 But there are different kinds of pollution—some visible, some invisible—that contribute to global warming. Generally any substance that people introduce into the atmosphere that has damaging effects on living things and the environment is considered air pollution. Carbon dioxide, a greenhouse gas, is the main pollutant that is warming Earth. Though living things emit carbon dioxide when they breathe, carbon dioxide is widely considered to be a pollutant when associated with cars, planes, power plants, and other human activities that involve the burning of fossil fuels such as gasoline and natural gas. In the past 150 years, such activities have pumped enough carbon dioxide into the atmosphere to raise its levels higher than they have been for hundreds of thousands of years. Another pollutant associated with climate change is sulfur dioxide, a component of smog. Pollution: Causes and Effects. Pollution, we hear it every other day at school, college and read about it in newspapers. 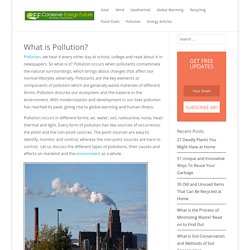 So what is it? Pollution occurs when pollutants contaminate the natural surroundings; which brings about changes that affect our normal lifestyles adversely. Pollutants are the key elements or components of pollution which are generally waste materials of different forms. Pollution disturbs our ecosystem and the balance in the environment. With modernization and development in our lives pollution has reached its peak; giving rise to global warming and human illness.

Untitled. Air pollutants can affect Canadians' health, the natural environment and the economy. 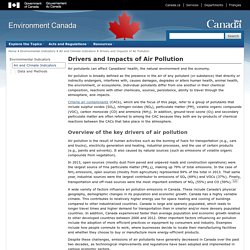 Air pollution is broadly defined as the presence in the air of any pollutant (or substance) that directly or indirectly endangers, interferes with, causes damages, degrades or alters human health, animal health, the environment, or ecosystems. Individual pollutants differ from one another in their chemical composition, reactions with other chemicals, sources, persistence, ability to travel through the atmosphere, and impacts.

Criteria air contaminants (CACs), which are the focus of this page, refer to a group of pollutants that include sulphur oxides (SOx), nitrogen oxides (NOx), particulate matter (PM), volatile organic compounds (VOC), carbon monoxide (CO) and ammonia (NH3). In addition, ground-level ozone (O3) and secondary particulate matter are often referred to among the CAC because they both are by-products of chemical reactions between the CACs that take place in the atmosphere. Economic impacts. Environmental Pollution, Its Sources and Effects. Environmental pollution had been a fact of life for many centuries but it became a real problem since the start of the industrial revolution. 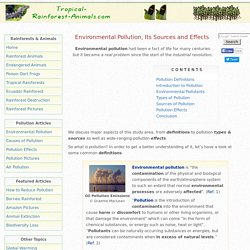 We discuss major aspects of this study area, from definitions to pollution types & sources as well as wide-ranging pollution effects. So what is pollution? In order to get a better understanding of it, let’s have a look at some common definitions.