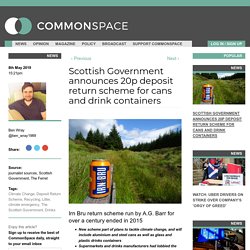 Biodegradable shopping bags buried for three years didn’t degrade. Microplastics are raining down from the sky, even in the mountains. London Marathon: How do you reduce the environmental impact? Image copyright Getty Images Tens of thousands of runners will take part in the London Marathon on Sunday - a gruelling 26.2-mile race around the capital. 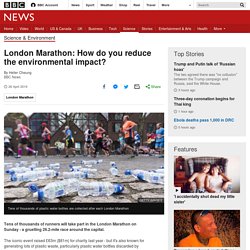 The iconic event raised £63m ($81m) for charity last year - but it's also known for generating lots of plastic waste, particularly plastic water bottles discarded by runners. Like concerts and other major events, the marathon also generates a massive carbon footprint with thousands travelling - some by plane - to the location.

Waste from food, packaging and goodie bags gets left behind by spectators and runners. 97% Of Plastic Bottles Are Recycled Under Norway's Radical Environmental Scheme. Most of Britain's tea bags contain plastic — Quartzy. There are few things less controversial in Britain than a cup of tea, or a “cuppa” as it’s affectionately known. 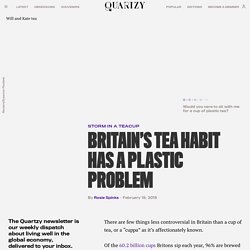 Of the 60.2 billion cups Britons sip each year, 96% are brewed using tea bags, in a market that’s largely dominated by three brands: PG Tips, Tetley, and Yorkshire Tea. But recently, it came to the attention of Britons that a majority of these seemingly innocuous tea bags contain plastic. This means that depositing those steaming parcels into the compost or rubbish bin isn’t quite the innocent activity that many Britons thought it was. The plastic contained in tea bags is polypropylene, a sealant which helps the bag retain its shape in boiling water. Nestlé, Tim Hortons named Canada's top plastic polluters.

Much of the plastic trash cleaned up from Canadian shorelines by volunteers in September could be traced back five companies: Nestlé, Tim Hortons, PepsiCo, the Coca-Cola Company and McDonald's, an audit led by Greenpeace Canada has found. 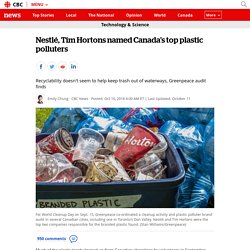 Greenpeace and other environmental advocacy groups working on the international Break Free from Plastic campaign looked for branding on 10,000 litres of food wrappers, plastic bottles, plastic-lined coffee cups and other trash collected in Vancouver, Toronto, Montreal and Halifax during World Cleanup Day on Sept. 15 and counted the results as part of their first Canadian plastic polluters brand audit. Edf. Recent reporting on the discovery and enhancement of plastic-dissolving enzymes in bacteria made me stop and think about what this might mean for the plastic pollution problem that is plaguing oceans and choking the world’s coral reefs. While this development is interesting and draws necessary focus to an immense environmental challenge, it is premature to guess whether these kinds of enzymes might provide an effective silver bullet for treating plastics floating in the five great gyres of the sea.

There is so much more we need to understand about the complex relationships between plastics and marine ecosystems before we can take drastic action such as spraying the ocean with so-called plastic-eating bacteria. Unknown and potentially hazardous side effects. Starbucks Bans Plastic Straws, Winds Up Using More Plastic. Mario Anzuoni/REUTERS/Newscom2018 will forever be remembered as the year that hating plastic straws went mainstream. 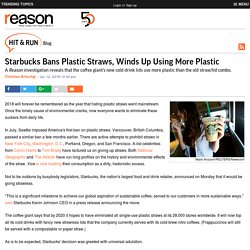 Once the lonely cause of environmental cranks, now everyone wants to eliminate these suckers from daily life. In July, Seattle imposed America's first ban on plastic straws. Vancouver, British Columbia, passed a similar ban a few months earlier. There are active attempts to prohibit straws in New York City, Washington, D.C., Portland, Oregon, and San Francisco. NPR Choice page. Jail time for using a plastic bag: Is Kenya's strict ban helping or hurting its people? Read Story Transcript Katoi Mange thought police officers were joking when they arrested him on the side of the road in Kenya last year. 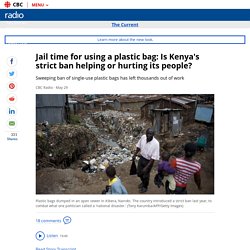 His offence? Using a plastic bag. But the police were serious. Mange, a fruit seller, was arrested for selling his produce in plastic bags. Mange was held overnight in a police station, and taken to court the next day. Katoi Mange, a fruit seller, spent a night in jail after selling his produce in plastic bags. Mange, who speaks Swahili, told freelance journalist Caro Rolando through a translator that the government recommended using cloth bags or nets instead. 8 bits of plastic you can quit right now - Sarah Wilson. The Earth can’t digest plastic. 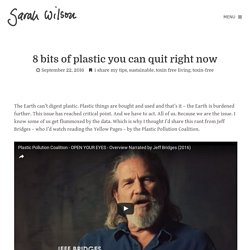 Plastic things are bought and used and that’s it – the Earth is burdened further. This issue has reached critical point. Care About the Ocean? Think Twice About Your Coffee Lid. Transforming Ottawa: How Jacques Gréber’s plan forever changed the capital, for better and worse. An expert reveals why you've been recycling wrong this whole time. 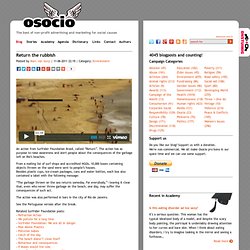 The action has as purpose to raise awareness and alert people about the consequences of the garbage left on Rio’s beaches. From a mailing list of surf shops and accredited NGOs, 10,000 boxes containing objects thrown on the sand were sent to people’s houses. Besides plastic cups, ice-cream packages, cans and water bottles, each box also contained a label with the following message: “The garbage thrown on the sea returns someday. The action was also performed in bars in the city of Rio de Janeiro.

See the Portuguese version after the break. Plastic State of Mind - Full Credits.