Pesticide Action Network. If there is a single pesticide almost everyone can name, it's DDT. 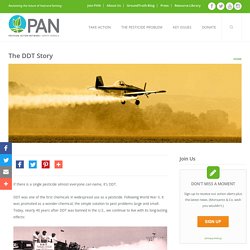 DDT was one of the first chemicals in widespread use as a pesticide. Following World War II, it was promoted as a wonder-chemical, the simple solution to pest problems large and small. Today, nearly 40 years after DDT was banned in the U.S., we continue to live with its long-lasting effects: The effect of polysorbate 80 on brain uptake and analgesic effect of D-kyotorphin. Abstract The effect of the non-ionic surfactant, polysorbate 80, on the blood-brain barrier was investigated by using an in situ brain perfusion technique. 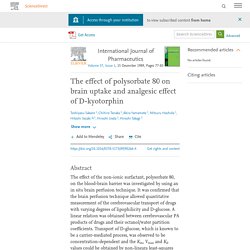 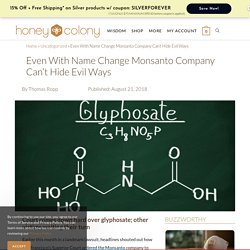 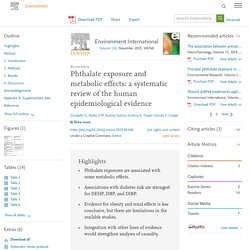 Attina, L. BPA chemical in plastic found in 90% of teenage bodies. Almost 90 per cent of teenagers have gender-bending chemicals from plastic in their bodies, according to a study. 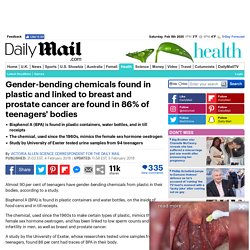 Bisphenol A (BPA) is found in plastic containers and water bottles, on the inside of food cans and in till receipts. The chemical, used since the 1960s to make certain types of plastic, mimics the female sex hormone oestrogen, and has been linked to low sperm counts and infertility in men, as well as breast and prostate cancer. A study by the University of Exeter, whose researchers tested urine samples from 94 teenagers, found 86 per cent had traces of BPA in their body. Chemical in Conventional Soaps and Toothpaste Leaves Unborn Babies Brain Damaged. December 02, 2010 from PreventDisease Website A chemical in popular toothpastes and soaps has been linked with brain damage to fetuses. 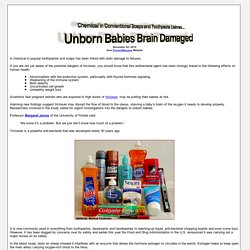 If you are not yet aware of the potential dangers of triclosan, you should know that this antibacterial agent has been strongly linked to the following effects on human health: Abnormalities with the endocrine system, particularly with thyroid hormone signaling Weakening of the immune system Birth defects Uncontrolled cell growth Unhealthy weight loss Scientists fear pregnant women who are exposed to high levels of triclosan, may be putting their babies at risk. Dispersants.

Chemical dispersants were sprayed in unprecedented quantities in the Gulf as part of the response to the BP oil spill. 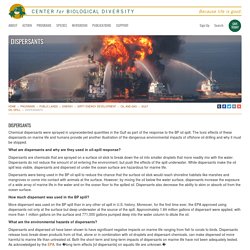 The toxic effects of these dispersants on marine life and humans provide yet another illustration of the dangerous environmental impacts of offshore oil drilling and why it must be stopped. What are dispersants and why are they used in oil-spill response? Dispersants are chemicals that are sprayed on a surface oil slick to break down the oil into smaller droplets that more readily mix with the water. Dispersants do not reduce the amount of oil entering the environment, but push the effects of the spill underwater. While dispersants make the oil spill less visible, dispersants and dispersed oil under the ocean surface are hazardous for marine life.

Dispersants were being used in the BP oil spill to reduce the chance that the surface oil slick would reach shoreline habitats like marshes and mangroves or come into contact with animals at the surface. Risks to humans. Facts About Chlorine. If you have ever taken a prescription medicine, driven a car or drunk tap water, you likely have been exposed to chlorine. 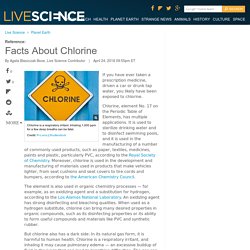 Chlorine, element No. 17 on the Periodic Table of Elements, has multiple applications. It is used to sterilize drinking water and to disinfect swimming pools, and it is used in the manufacturing of a number of commonly used products, such as paper, textiles, medicines, paints and plastic, particularly PVC, according to the Royal Society of Chemistry. Moreover, chlorine is used in the development and manufacturing of materials used in products that make vehicles lighter, from seat cushions and seat covers to tire cords and bumpers, according to the American Chemistry Council. The element is also used in organic chemistry processes — for example, as an oxidizing agent and a substitution for hydrogen, according to the Los Alamos National Laboratory. Glyphosate Herbicide Found in 14 Popular Beer Brands from Germany. Want a round of Round Up with your beer? 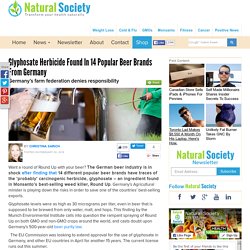 The German beer industry is in shock after finding that 14 different popular beer brands have traces of the ‘probably’ carcinogenic herbicide, glyphosate – an ingredient found in Monsanto’s best-selling weed killer, Round Up. Germany’s Agricultural minster is playing down the risks in order to save one of the countries’ best-selling exports. Glyphosate levels were as high as 30 micrograms per liter, even in beer that is supposed to be brewed from only water, malt, and hops.

Flavorings-Related Lung Disease - NIOSH Workplace Safety and Health Topic. This topic page provides a resource for findings and recommendations by the National Institute for Occupational Safety and Health (NIOSH) to reduce the risk of severe obstructive lung disease (obliterative bronchiolitis) associated with occupational exposures to flavorings. 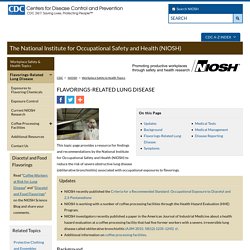 Background In August 2000, the Missouri Department of Health and Senior Services requested technical assistance from NIOSH in an investigation of bronchiolitis obliterans (also known as obliterative bronchiolitis) in former workers of a microwave popcorn plant in Jasper, Missouri. Obliterative bronchiolitis is a serious lung disease that is irreversible. 10 toxic chemicals in personal care products. (NaturalHealth365) Opting for locally sourced, whole foods is a critical step in taking care of your personal health.

But, being concerned about what food goes into your mouth is only half the battle. Research Warns BPA-Free Plastic Bottles Still Toxic to Infants and Toddlers. Michael Green, an environmental health executive and father of a feisty toddler named Juliette, worked to rid his cabinets of baby bottles and plastic cups containing the additive bisphenol A (BPA), which mimics estrogen and has been linked to serious health problems like cancer, diabetes, miscarriages and obesity. Green switched to BPA-free plastics to solve the issue, but was alarmed when he found research suggesting some of these “healthier” bottles and cups contained synthetic estrogens as well. To get a more definitive answer, Green turned to the company he runs, the Californ0a-based Center for Environmental Health, to see just what additives were used to form the BPA-free plastics.

Mother Jones reports: The center shipped Juliette’s plastic cup, along with 17 others purchased from Target, Walmart and Babies R Us, to CertiChem, a lab in Austin, TX. More than a quarter—including Juliette’s—came back positive for estrogenic activity. Cancer-causing formaldehyde found in hair treatment products - NaturalNews.com. Friday, May 09, 2014 by: L.J. Devon, Staff WriterTags: formaldehyde, hair treatment products, carcinogens (NaturalNews) The dermatology department at the University of Cape Town (UCT) in South Africa has revealed startling new test results on hair-straightening products.

Many Brazil-based hair product brands have tested high for carcinogenic formaldehyde, at levels five times the legal limit. In cosmetic products, formaldehyde exists in a liquid state, as formalin. Chemicals Found Everywhere Confuse Sperm, Destroy Male Health. Heather Callaghan Activist Post German research shows a direct link between endocrine disrupting chemicals (EDCs) and sperm function which may negatively affect fertilization. Why You Should Avoid PVC Products. Credit to Openhouse at Ok, so you know about the potential health implications of BPA in plastic and you do your best to avoid it.

But what about PVC in plastics and other products? PVC—polyvinyl chloride, or vinyl—is found in a range of products, from children’s toys to building materials to food packaging. Healthy Child Healthy World describes PVC as the most toxic plastic, and vinyl chloride, the chemical used to make PVC, has been described as a known carcinogen by the World Health Organization’s International Agency for Research on Cancer. PVC, because of its high chlorine content, creates toxic pollution in the form of dioxins, which accumulate in animals’ fat up through the food chain. Chlorophenols.pdf. A Roundup of Roundup® Reveals Converging Pattern of Toxicity.

Victoria's Secret sells toxic chemicals. Research: Bisphenol A (BPA) Causes 100x More Harm Than Previously Imagined. How BPA Can Slowly Kill You - NaturalON. Your Non-Stick Frying Pan May Be Causing Problems. Nothing may stick to non-stick cookware, but new research suggests that the byproducts of the heat-resistant coating may be sticking around in the environment for a long time.

The Problem with Pesticides. Pesticides Pesticides are the only toxic substances released intentionally into our environment to kill living things. Just When You Thought You Knew Everything About Fluoride. Photo credit: bigstock.com Did you know that dental fluorosis is a condition that is caused by too much fluoride, and that it’s on the rise in the United States?

Monsanto ignores glyphosate toxicity. (NaturalHealth365) It seems the risk of poisoning civilians has been the price to pay in the midst of the United States war on drugs in South America. The Health Dangers of Carrageenan. Carrageenan is a food additive commonly used in commercial yogurts, dairy-free milk, and other processed foods. The Problem With All This Plastic (It’s A Bigger Problem Than You Think!) Photo credit: bigstock.com As with everything in this world, there is a payoff for convenience. Getting Away with Ecocide — Chemical Reform Bill Could Grant Monsanto Legal Immunity for PCB Pollution. Autism Bomb: Bayer Herbicide Causes Autism, Even at Trace Levels. Pesticides linked to 9 diseases. Bisphenol A (BPA) at Very Low Levels Can Harm Organs in Primates. FACT: There is no Gay gene, but there ARE chemicals that turn people gay.

Aluminum, Fluoride and Glyphosate — A Toxic Trifecta Implicated in Autism and Alzheimer's Disease Research. PHOSPHORUS TRICHLORIDE. Sources of Fluoride. ChemSpider. We Are Being Sprayed W/ Lithium! Are You? Do You Have Lithium Symptoms? Butyl rubber. A “Silent Pandemic" of Toxic Chemicals is Destroying Our Children’s Brains, Experts Warn. Why ‘Fragrance’ Really Stinks – The Hidden Airborne Pollutants in Your Home. New Research Links Hand Sanitizer Use With Thyroid Cancer. Toxicity and Top 6 chemicals in Food to Stay Away From - Dr. Jay Davidson.

85% of Tampons, Pads and Other Feminine Care Products Contaminated with Monsanto’s Cancer-Causing, Endocrine-Disrupting Glyphosate. 33 Toxic Hair Straighteners Under International Recall Still Sold in U.S. 5 Dangerous Chemicals in Conventional Sunscreens. How Congress Is About to Make It Easier for Chemical Companies to Poison Us.

Laundry detergents causing mass poisoning of American children - stop buying toxic chemicals. In Utero exposure to BPA May Adversely Affect Male Genital Development. Analysis Confirms Chemicals in Food Are More Hazardous in Combination. Are you putting Monsanto in your vagina? 85% of tampons and feminine hygiene products contaminated with cancer-causing glyphosate herbicide. Some Of The Scariest Ingredients In Cigarettes (You Will Quit For Good After This!) Dangerous chemicals in skin products. Toxins in Disposable Diapers: Dioxin and Sodium Polyacrylate. Food dyes damage DNA and cause cancer. Chlorine in pools shown to cause serious health problems.