Banned new technologies. Facebook. Misuse of the Technology. Globalisation. These 15 Drawings Are An Incredible Reflection Of What’s ‘Wrong’ With Society. The Facts:Joe Rogan recently had James Wilks, the maker of "The Game Changers" documentary on to discuss the benefits of a plant base diet and to refute a previous episode where Chris Kresser debunked it.Reflect On:When it comes to health, it's important sometimes to suspend what we believe and have been made to believe, and simply look at the information from a neutral perspective. 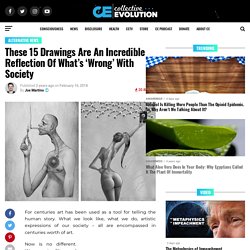 Joe Rogan has long ‘criticized’ vegans in various ways, and has also emphasized his belief that one cannot be optimally healthy on a vegan diet. He’s done this a number of times, which was hard for some onlookers to watch and listen to who have educated themselves on plant-based diets. Until recently, Rogan mainly focused on guests that were geared towards promoting meat-eating as optimal, and there’s nothing wrong with that, but a balance of understanding and information can go a long way to educating people. Facebook Watch.

Planetary Boundaries: Exploring the Safe Operating Space for Humanity. Idiocracy Director: It’s Kind of Scary How Quickly the Movie Became a Documentary. Detlef Clöwe - Are you in for a change? Do you want to... Pictures Of The Sad Truth Of Modern Life That Are Spot On. When it comes to the world we live in; there are certain truths that we want to ignore but cannot. 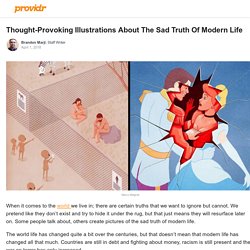 We pretend like they don’t exist and try to hide it under the rug, but that just means they will resurface later on. Some people talk about, others create pictures of the sad truth of modern life. The world life has changed quite a bit over the centuries, but that doesn’t mean that modern life has changed all that much. Countries are still in debt and fighting about money, racism is still present and the war on terror has only increased. Sometimes words are not enough to describe these sad truths.

Violence against women. Waste of Resources. War. More Hard Hitting Words From The Dalai Lama About The Mass Brainwashing Of Society. The 14th Dalai Lama of Tibet is always garnering a lot of attention, and for good reason. 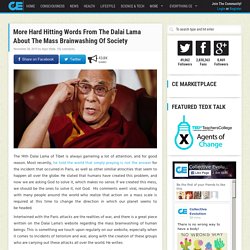 Rate of environmental degradation puts life on Earth at risk, say scientists. Humans are “eating away at our own life support systems” at a rate unseen in the past 10,000 years by degrading land and freshwater systems, emitting greenhouse gases and releasing vast amounts of agricultural chemicals into the environment, new research has found. 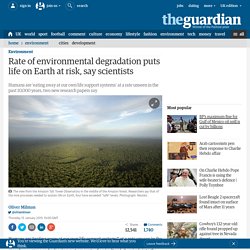 Two major new studies by an international team of researchers have pinpointed the key factors that ensure a livable planet for humans, with stark results. In Just 60 Years, Neoliberal Capitalism Has Nearly Broken Planet Earth. This post first appeared at Common Dreams. 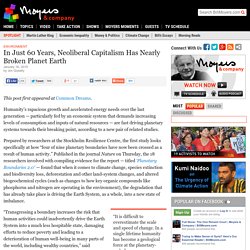 Humanity’s rapacious growth and accelerated energy needs over the last generation — particularly fed by an economic system that demands increasing levels of consumption and inputs of natural resources — are fast driving planetary systems towards their breaking point, according to a new pair of related studies. Prepared by researchers at the Stockholm Resilience Centre, the first study looks specifically at how “four of nine planetary boundaries have now been crossed as a result of human activity.” “It is difficult to overestimate the scale and speed of change. In a single lifetime humanity has become a geological force at the planetary-scale.” In addition to the four boundaries that have already been crossed, the study looked five other ways in which the planetary systems are under assault by human activity.

The Microbiota Crisis: How the Herbicide Glyphosate is Killing Microbiomes. Photo by Martin Michener by Martin Michener, PhD Health Impact News Healthy Gut Flora: Key to Health Americans are beginning to realize that our gut flora is extremely important to our health, both daily and for the long term. 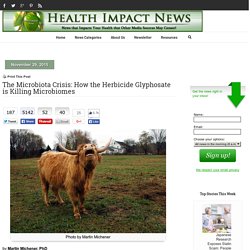 But most folks have little idea about how to ensure the balance of their natural digestive environment. This Homeless Boy Just Wanted Money To Feed His Sister. What Happens Next Totally Shocked Me. Googlar efter bilder på svenska barn – nästa sökning gör ont i hjärtat. Germany warns citizens to avoid using Wi-Fi - Green Living - Environment. Its surprise ruling – the most damning made by any government on the fast-growing technology – will shake the industry and British ministers, and vindicates the questions that The Independent on Sunday has been raising over the past four months. 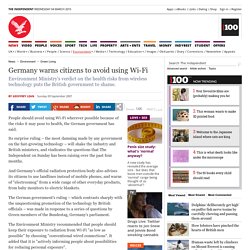 And Germany's official radiation protection body also advises its citizens to use landlines instead of mobile phones, and warns of "electrosmog" from a wide range of other everyday products, from baby monitors to electric blankets. Following the Money: Who’s in Control? Human beings are beginning to question the environment around them more so than ever before. Our capability to step outside of the box and observe events taking place on planet Earth from a neutral standpoint continues to increase at an exponential rate.

Observing the entire Earth experience from an open mind has cleared the way for a change in perception, which has the potential to change our planet and the way we operate on it forever. Political, media, food, education, health, energy and financial industries are now under intense scrutiny as people continue to let go of fear, speak up and ask more questions. Scientists: Human activity has pushed Earth beyond four of nine ‘planetary boundaries’ Clmate change: A severe drought plagued a third of Queensland, Australia in 2013. 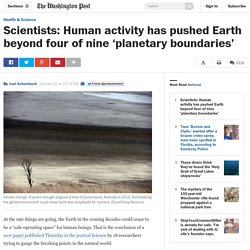 Destabilizing the global environment could make Earth less hospitable for humans. (David Gray/Reuters) At the rate things are going, the Earth in the coming decades could cease to be a “safe operating space” for human beings. That is the conclusion of a new paper published Thursday in the journal Science by 18 researchers trying to gauge the breaking points in the natural world. Researchers May Have Created A H1N1 Flu Strain Capable Of Evading The Immune System. Back in June, we heard of a controversial study conducted by a team of University of Wisconsin-Madison researchers that generated an influenza virus with similar characteristics to the infamous 1918 pandemic flu virus. 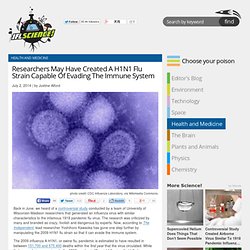 The research was criticized by many and branded as crazy, foolish and dangerous by experts. Now, according to The Independent, lead researcher Yoshihoro Kawaoka has gone one step further by manipulating the 2009 H1N1 flu strain so that it can evade the immune system. The 2009 influenza A H1N1, or swine flu, pandemic is estimated to have resulted in between 151,700 and 575,400 deaths within the first year that the virus circulated. While that may pale in comparison to the 1918 pandemic “Spanish” flu virus that killed an estimated 50 million people, given the number of people exposed to the 2009 virus it is likely that a large number of individuals worldwide are now immune to this particular strain.

10 Shocking Photos That Will Change How You See Consumption And Waste. As individual and anonymous consumers, it's seemingly impossible to even estimate the physical ramifications of our daily consumption and waste. 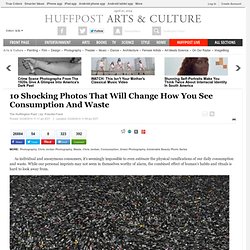 While our personal imprints may not seem in themselves worthy of alarm, the combined effect of human's habits and rituals is hard to look away from. Cell phones #2, Atlanta 2005 Photographer Chris Jordan works with the debris we as a society leave behind, photographing massive dumps of cell phones, crushed cars and circuit boards. Squished together in dizzying quantities, the discarded goods resemble hypnotic puzzles, abstracted color fields and hallucinatory fractals. Forskare: CIA kan försöka militarisera vädret. Finsk professor varnar: trådlös teknik kommer leda till global epidemi av hjärnskador. It Sounds Pretty Racist When You Say It All At The Same Time.

What Facebook Is Doing to Your Brain Is Kind of Shocking. 13 Most Evil U.S. Government Experiments on Humans. The U.S. Government has been caught conducting an insane amount of vile, inhumane and grisly experiments on humans without their consent and often without their knowledge. So in light of recent news of the U.S. infecting Guatemalans with STDs, here are the 13 most evil, for lack of a better word, cases of human-testing as conducted by the United States of America. Get ready to become one of those conspiracy theory nuts, because after this list, you will never fully trust your government again. 1) Mind Control, Child Abuse – Project MKULTRA, Subproject 68.

16 Signs That You’re a Slave to the Matrix. NASA-funded study says “irreversible collapse” of industrial civilization likely in coming decades. By Nafeez Ahmed / The Guardian A new study sponsored by Nasa’s Goddard Space Flight Center has highlighted the prospect that global industrial civilisation could collapse in coming decades due to unsustainable resource exploitation and increasingly unequal wealth distribution.

Noting that warnings of ‘collapse’ are often seen to be fringe or controversial, the study attempts to make sense of compelling historical data showing that “the process of rise-and-collapse is actually a recurrent cycle found throughout history.” Cases of severe civilisational disruption due to “precipitous collapse – often lasting centuries – have been quite common.” The research project is based on a new cross-disciplinary ‘Human And Nature DYnamical’ (HANDY) model, led by applied mathematician Safa Motesharri of the US National Science Foundation-supported National Socio-Environmental Synthesis Center, in association with a team of natural and social scientists.