Avoidance is key because once eaten the damage to your organs and dna begins. 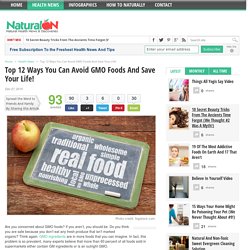 If you aren’t, you should be. Do you think you are safe because you don’t eat any fresh produce that isn’t marked organic? Think again. Possible negative impacts of GMOs on health and skin: How to avoid GMOs in skincare products. (NaturalNews) Genetically Modified Organisms (GMOs) are plants and other living organisms derived from modern molecular biotechnology techniques that alter the genetics of the organism. 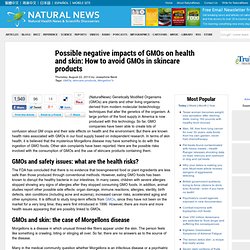 A large portion of the food supply in America is now produced with this technology. So far, GMO companies have been able to create lots of confusion about GM crops and their side effects on health and the environment. But there are known health risks associated with GMOs in our food supply based on independent research. In terms of skin health, it is believed that the mysterious Morgellons disease may have something to do with the ingestion of GMO foods. Other skin complaints have been reported. Many in the medical community question whether Morgellons is an infectious disease or a psychiatric disorder in which a person thinks parasites have infected their skin.

Better safe than sorry... Sources for this article include: How to Identify G M O Genetically Modified Food @ the Grocery Store. Unlabeled GMO Potatoes Have Landed on Store Shelves; 6 Steps to Avoid Them. By Nick Meyer Who really wants the new genetically modified potato in their shopping cart, anyway? 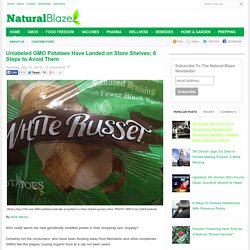 Certainly not the consumers, who have been flocking away from Monsanto and other companies’ GMOs like the plague, buying organic food at a clip not seen years. And it’s certainly not the potato farmers, either: the National Potato Council itself even admitted that the new GMO potatoes from the company J.R. Simplot could cause financial losses in the billions for American farmers. “(There is) concern about the potential for GMO technology to disrupt potato exports valued at more than $1.6 billion,” Potato Council CEO John Keeling admitted in July 2014. But now, the genetically modified spuds that no one wanted have been found on store shelves, unlabeled and dangerously untested. 400 Companies That DO NOT Use Any GMO Ingredients. Home Remedies Help Restore Your Health After Eating GMO Foods. There have been various reports on NaturalNews.com and in the mainstream media concerning the side effects of consuming food that has been genetically modified. 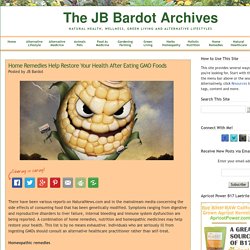 Symptoms ranging from digestive and reproductive disorders to liver failure, internal bleeding and immune system dysfunction are being reported. A combination of home remedies, nutrition and homeopathic medicines may help restore your health. This list is by no means exhaustive. Individuals who are seriously ill from ingesting GMOs should consult an alternative healthcare practitioner rather than self-treat. Homeopathic remedies Not all side effects from GMOs are physical.

. · Nux vomica supports the liver, for cleansing and rejuvenation. . · Arsenicum album relieves acute cases of vomiting and diarrhea. . · Rhus tox may help an individual who believes he has been poisoned by GMO foods he’s eaten. Nutritional support · Start eating organic fruits and vegetables and if you can, juice them several times a day. 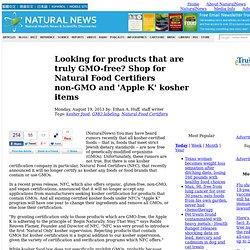 Unfortunately, these rumors are not true. But there is one kosher certification company in particular, Natural Food Certifiers (NFC), that recently announced it will no longer certify as kosher any foods or food brands that contain or use GMOs. In a recent press release, NFC, which also offers organic, gluten-free, non-GMO, and vegan certifications, announced that it will no longer accept any applications from manufacturers seeking kosher certification for products that contain GMOs. And all existing certified kosher foods under NFC's "Apple K" program will have one year to change their ingredients and remove all GMOs, or else lose their certification.

"By granting certification only to those products which are GMO-free, the Apple K is adhering to the principle of 'Begin Naturally. How to Identify GMO’s in Our Foods. How to avoid GMOs. How to Avoid GMOs (for real) - Mama Natural. In the U.S., GMOs are everywhere in our supply chain. 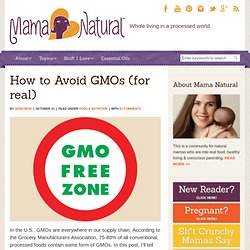 According to the Grocery Manufacturers Association, 75-80% of all conventional, processed foods contain some form of GMOs. In this post, I’ll tell you how to avoid them. First, a bit of background GMOs are plant or meat products with DNA artificially altered in a laboratory by genes from other plants,Â animals,Â viruses, orÂ bacteria, resulting in foreign compounds found in these foods. This type of genetic alteration is not found in nature and hasn’t been studied extensively. In this post, I’m not going to argue the merits of going GMO-free. Bottom line, if you chose to consume GMOs, that’s yourÂ prerogative. CFS Shoppers' Guide - shoppers-guide_final_24562.pdf. These 7 Mobile Apps Will Help You Find GMO and Additive-Free Foods.