OR&R's Marine Debris Program. One of the main types of marine debris that you hear about today is plastic marine debris. 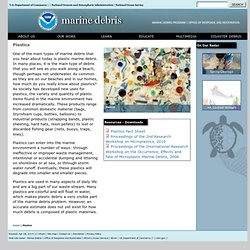 In many places, it is the main type of debris that you will see as you walk along a beach, though perhaps not underwater. As common as they are on our beaches and in our homes, how much do you really know about plastics? As society has developed new uses for plastics, the variety and quantity of plastic items found in the marine environment has increased dramatically.

These products range from common domestic material (bags, Styrofoam cups, bottles, balloons) to industrial products (strapping bands, plastic sheeting, hard hats, resin pellets) to lost or discarded fishing gear (nets, buoys, traps, lines). Plastics can enter into the marine environment a number of ways: through ineffective or improper waste management, intentional or accidental dumping and littering on shorelines or at sea, or through storm water runoff. Great Pacific garbage patch. The area of increased plastic particles is located within the North Pacific Gyre, one of the five major oceanic gyres. 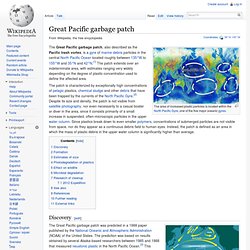 The Great Pacific garbage patch, also described as the Pacific trash vortex, is a gyre of marine debris particles in the central North Pacific Ocean located roughly between 135°W to 155°W and 35°N and 42°N.[1] The patch extends over an indeterminate area, with estimates ranging very widely depending on the degree of plastic concentration used to define the affected area. The patch is characterized by exceptionally high concentrations of pelagic plastics, chemical sludge and other debris that have been trapped by the currents of the North Pacific Gyre.[2] Despite its size and density, the patch is not visible from satellite photography, nor even necessarily to a casual boater or diver in the area, since it consists primarily of a small increase in suspended, often-microscopic particles in the upper water column. 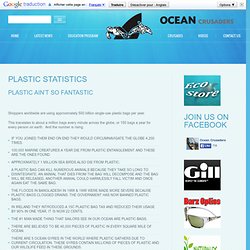 This translates to about a million bags every minute across the globe, or 150 bags a year for every person on earth. And the number is rising. If you joined them end on end they would circumnavigate the globe 4,200 times.100,000 marine creatures a year die from plastic entanglement and these are the ones found.Approximately 1 million sea birds also die from plastic.A plastic bag can kill numerous animals because they take so long to disintegrate. An animal that dies from the bag will decompose and the bag will be released, another animal could harmlessly fall victim and once again eat the same bag.The floods in Bangladesh in 1988 & 1998 were made more severe because plastic bags clogged drains. Plastics in Our Oceans. All photos (except where noted) courtesy of Paul Joyce, Sea Education Association by Kimberly Amaral Strolling through the average supermarket, shoppers find literally hundreds (if not thousands) of items to make their lives easier. 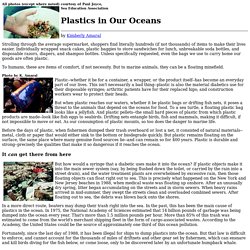 Plastic in Bird’s Stomachs Reveals Ocean’s Garbage Problem. Plastic found in the stomachs of dead seabirds suggests the Pacific Ocean off the northwest coast of North America is more polluted than was realized. 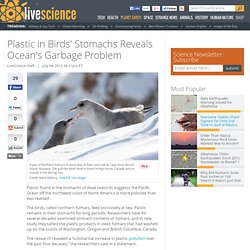 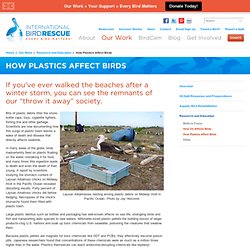 Scientists are now documenting how this surge of plastic trash leaves a wake of death and disease that directly affects seabirds. In many areas of the globe, birds inadvertently feed on plastic floating on the water, mistaking it for food, and many times this ingestion leads to death and even the death of their young. A report by scientists studying the stomach content of Laysan Albatross chicks on Midway Atoll in the Pacific Ocean revealed disturbing results: Forty percent of Laysan Albatross chicks die before fledging. Necropsies of the chick's stomachs found them filled with plastic trash. Large plastic detritus such as bottles and packaging has well-known effects on sea life, strangling birds and fish and transporting alien species to new waters. Because plastic pellets are magnets for toxic chemicals like DDT and PCBs, they effectively become poison pills. What we know: Ocean Plastic. Marine Research Institute - Marine Research, Education and Restoration.

Plastic Pollution. PLASTIC & POLLUTION - PangeaSeed. Plastic is as common to see at the beach as seashells are, but plastic litter is more than just an aesthetic disturbance; it’s a sign that humans are treating the oceans like a garbage bin.Today, the oceans and marine life are facing the threat of permanent alteration from a number of sources of pollution, and plastic is among the most significant. 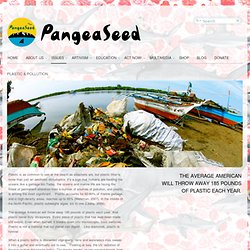 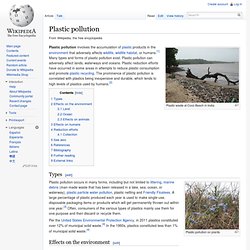