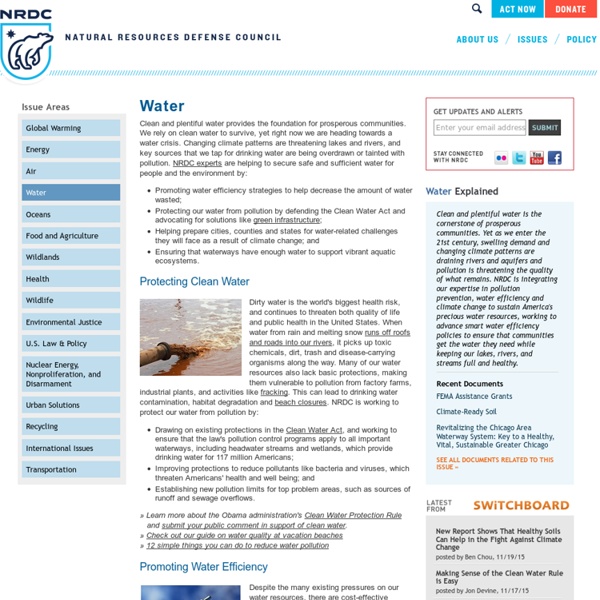 Clean and plentiful water provides the foundation for prosperous communities. We rely on clean water to survive, yet right now we are heading towards a water crisis. Changing climate patterns are threatening lakes and rivers, and key sources that we tap for drinking water are being overdrawn or tainted with pollution. Promoting water efficiency strategies to help decrease the amount of water wasted;Protecting our water from pollution by defending the Clean Water Act and advocating for solutions like green infrastructure;Helping prepare cities, counties and states for water-related challenges they will face as a result of climate change; andEnsuring that waterways have enough water to support vibrant aquatic ecosystems. Protecting Clean Water Dirty water is the world's biggest health risk, and continues to threaten both quality of life and public health in the United States. Promoting Water Efficiency Water and Climate Change » Is your state ready for the water impacts of climate change?

China to spend $330 billion to fight water pollution -paper National Geographic Freshwater 101: Pollution As technology improves, scientists are able to detect more pollutants, and at smaller concentrations, in Earth’s freshwater bodies. Containing traces of contaminants ranging from birth control pills and sunscreen to pesticides and petroleum, our planet's lakes, rivers, streams, and groundwater are often a chemical cocktail. Beyond synthetic pollution, freshwater is also the end point for biological waste, in the form of human sewage, animal excrement, and rainwater runoff flavored by nutrient-rich fertilizers from yards and farms. These nutrients find their way through river systems into seas, sometimes creating coastal ocean zones void of oxygen—and therefore aquatic life—and making the connection between land and sea painfully obvious. In the developed world, regulation has restricted industry and agricultural operations from pouring pollutants into lakes, streams, and rivers. Fast Facts

Cambodian shoe factory collapse kills 2, injures 7 PHNOM PENH, Cambodia (AP) — The ceiling of a Cambodian factory that makes Asics sneakers collapsed on workers early Thursday, killing two people and injuring seven, in the latest accident spotlighting the often lethal safety conditions faced by those toiling in the global garment industry. About 50 workers were inside a workroom of the factory south of Phnom Penh when the ceiling caved in, said police officer Khem Pannara. He said heavy iron equipment stored on a mezzanine above them appeared to have caused the collapse. Two bodies were pulled from the wreckage and seven people were injured, he said. Rescuers picked through rubble for several hours and after clearing the site said that nobody else was trapped inside. At a clinic where she was being treated for her injuries, worker Kong Thary cried on the telephone as she recounted the collapse. "We were working normally and suddenly several pieces of brick and iron started falling on us," the 25-year-old said. The U.N.'