Beijing Air Pollution: Real-time PM2.5 Air Quality Index (AQI) Some Facts on Automobiles and the Environment. We were asked a while ago if we could provide some information on the impact of automobiles on the environment. 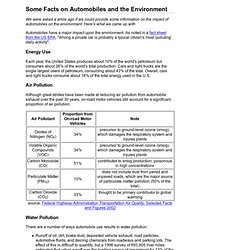 Here's what we came up with Automobiles have a major impact upon the environment. As noted in a fact sheet from the US EPA, "driving a private car is probably a typical citizen's most 'polluting' daily activity". Energy Use Each year, the United States produces about 10% of the world's petroleum but consumes about 26% of the world's total production.

Air Pollution Although great strides have been made at reducing air pollution from automobile exhaust over the past 30 years, on-road motor vehicles still account for a significant proportion of air pollution: source: Federal Highway Administration Transportation Air Quality: Selected Facts and Figures 2002 Water Pollution There are a number of ways automobile use results in water pollution: Noise Pollution Car and truck noise has become perhaps the primary source of noise pollution in urban environments. 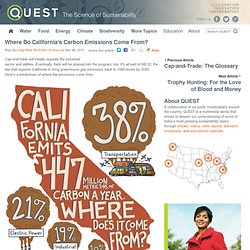 Eventually, fuels will be phased into the program, too. It's all part of AB 32, the law that requires California to bring greenhouse gas emissions back to 1990 levels by 2020. Here's a breakdown of where the emissions come from. Related Explore: ab 32, cap and trade, climate change Category: Blog, Climate About the Author (Author Archive)

Introduction: Climate Change - environment - 01 September 2006. Climate change is with us. 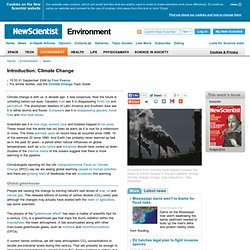 A decade ago, it was conjecture. Now the future is unfolding before our eyes. Canada's Inuit see it in disappearing Arctic ice and permafrost. The shantytown dwellers of Latin America and Southern Asia see it in lethal storms and floods. Europeans see it in disappearing glaciers, forest fires and fatal heat waves. Scientists see it in tree rings, ancient coral and bubbles trapped in ice cores. Climatologists reporting for the UN Intergovernmental Panel on Climate Change (IPCC) say we are seeing global warming caused by human activities and there are growing fears of feedbacks that will accelerate this warming.

Global greenhouse People are causing the change by burning nature's vast stores of coal, oil and natural gas. The physics of the "greenhouse effect" has been a matter of scientific fact for a century. If current trends continue, we will raise atmospheric CO2 concentrations to double pre-industrial levels during this century. Deeper cuts More from the web. The ozone layer. What Would have Happened to the Ozone Layer ? Assessing the State of the Ozone Layer NOAA. Photochemical Smog Demonstration, Jesse Miller, Chemist Corner, 8/20/2008. American Lung Association State of the Air 2013 - Ozone Pollution. Visualizing The U.S. Electric Grid. The Effects of Air Pollution: Acid Rain.

Air Pollution and Asthma: 4 Ways to Stay Safe on 'Ozone-Alert' Days. Summer months can be tough on people with asthma, which affects more than 20 million Americans. 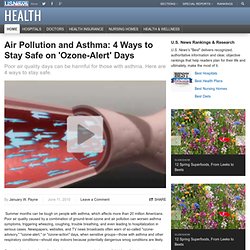 Ozone is the primary ingredient in urban smog, generated when sunlight hits pollutants spewed by cars, chemical plants, industrial boilers, refineries, and other sources. It occurs naturally in the Earth's upper atmosphere, but when it's released at ground level, it becomes a harmful outdoor pollutant. [Read: Top 10 U.S. Air pollution tied to stroke, memory loss. Scientists Find New Dangers in Tiny but Pervasive Particles in Air Pollution. Hearts and Air Pollution: 5 Deadly Air Pollutants Measured on 5 Continents. Around the world, breathing a variety of air pollutants – in some cases for a single day – increases the chance that people will suffer heart attacks, according to a new analysis published Tuesday. 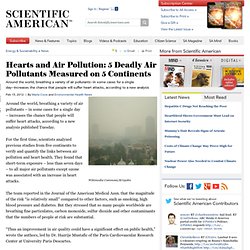 For the first time, scientists analyzed previous studies from five continents to verify and quantify the links between air pollution and heart health. They found that short-term exposure – less than seven days – to all major air pollutants except ozone was associated with an increase in heart attacks. The team reported in the Journal of the American Medical Assn. that the magnitude of the risk “is relatively small” compared to other factors, such as smoking, high blood pressure and diabetes. But they stressed that so many people worldwide are breathing fine particulates, carbon monoxide, sulfur dioxide and other contaminants that the numbers of people at risk are substantial.

“Thus an improvement in air quality could have a significant effect on public health,” wrote the authors, led by Dr.