Plastic Breaks Down in Ocean, After All 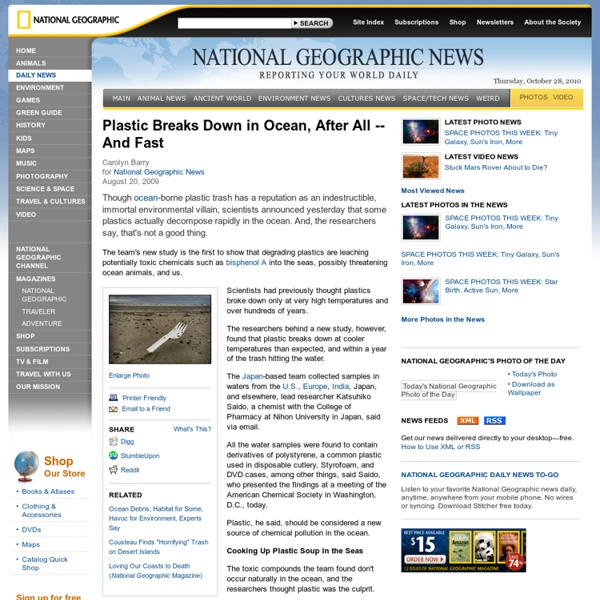 August 20, 2009 Though ocean-borne plastic trash has a reputation as an indestructible, immortal environmental villain, scientists announced yesterday that some plastics actually decompose rapidly in the ocean. And, the researchers say, that's not a good thing. The team's new study is the first to show that degrading plastics are leaching potentially toxic chemicals such as bisphenol A into the seas, possibly threatening ocean animals, and us. Scientists had previously thought plastics broke down only at very high temperatures and over hundreds of years. The researchers behind a new study, however, found that plastic breaks down at cooler temperatures than expected, and within a year of the trash hitting the water. The Japan-based team collected samples in waters from the U.S., Europe, India, Japan, and elsewhere, lead researcher Katsuhiko Saido, a chemist with the College of Pharmacy at Nihon University in Japan, said via email. Cooking Up Plastic Soup in the Seas Plastic Breaks Down Fast

Study Finds Rising Levels of Plastics in Oceans Photo Some eight million metric tons of plastic waste makes its way into the world’s oceans each year, and the amount of the debris is likely to increase greatly over the next decade unless nations take strong measures to dispose of their trash responsibly, new research suggests. The report, which appeared in the journal Science on Thursday, is the most ambitious effort yet to estimate how much plastic debris ends up in the sea. Jenna Jambeck, an assistant professor of environmental engineering at the University of Georgia and lead author of the study, said the amount of plastic that entered the oceans in the year measured, 2010, might be as little as 4.8 million metric tons or as much as 12.7 million. The paper’s middle figure of eight million, she said, is the equivalent of “five plastic grocery bags filled with plastic for every foot of coastline in the world” — a visualization that, she said, “sort of blew my mind.” Ms. Plastics have been spotted in the oceans since the 1970s.

Are You Polluting Our Waterways with Plastic Microbeads? « Annmarie Gianni Skin CareAnnmarie Gianni Skin Care Have you used those body washes that have little exfoliating beads in them? Did you ever check to see what those beads are made of? If you did, were you able to figure it out from the label? Turns out that in many products, those little natural-looking beads are anything but natural—and thousands of them are now polluting our lakes and streams. Those little exfoliating microbeads in your body wash could be tiny pieces of plastic that will wash down the drain to pollute our waterways. Microbeads in Personal Care Products a Concern According to recent news reports, tiny bits of plastic from body washes and other products are polluting the great lakes. The problem is that these little balls of plastic are less than a millimeter across in size, so they’re too small be be caught by water treatment plants. “We’re plasticizing our water,” said Sherri Mason, principal investigator for the study. Plastics May be Contaminated with Other Toxins Johnson & JohnsonUnileverThe Body Shop

The Story of Microfibers - The Story of Stuff Project Most of us wear synthetic fabrics like polyester every day. Our dress shirts, yoga pants, fleeces, and even underwear are all increasingly made of synthetic materials — plastic, in fact. But these synthetic fabrics, from which 60% of all clothing on earth is made, have a big hidden problem: when they’re washed, they release tiny plastic bits — called microfibers — that flow down our drains, through water treatment plants, and out into our rivers, lakes and oceans by the billions. Go deeper: Microfibers FAQs Script with Citations Microfibers Research Guide Credits NSDL.org - National Science Digital Library Record Amount of Microplastic Found in Arctic Sea Ice Researchers find up to 12,000 pieces of microplastic particles per liter of sea ice in core samples.Their findings are three times higher than previous studies. A record concentration of microplastics has been discovered trapped in the Arctic's sea ice. Researchers with the Alfred Wegener Institute at Germany's Helmholtz Centre for Polar and Marine Research say they found up to 12,000 pieces of microplastic particles per liter of sea ice in core samples taken from five locations. The concentrations are three times higher than levels in previous studies, according to a press release. The study published in Nature Communications this week notes that the microplastic particles from packaging, paints, nylon, polyester and cellulose acetate are incredibly small, with some measuring just 11 micrometers across. AWI biologist and lead author Dr. “No one can say for certain how harmful these tiny plastic particles are for marine life, or ultimately also for human beings," Peeken said.

TEACH Great Lakes Are you interested in learning more about the Great Lakes? Start your exploration with an Introduction to the Great Lakes. Do you have a specific question about the Great Lakes that you've been wondering about? TEACH Great Lakes features mini-lessons on many Great Lakes topics: environment, history & culture, geography, pollution, and careers & business. New! Do you have a topic that you would like to see covered in this section of TEACH? Featured sponsor: CollegeSurfing.com allows visitors to research, find, and request information from more than 900 educational institutions and 3,500 campuses offering thousands of degree and certificate programs.