Air pollution 'causes 467,000 premature deaths a year in Europe' Toxic smog covers Delhi after Diwali. Delhi has been blanketed in a toxic fog the morning after the Hindu festival of Diwali, when hundreds of thousands of people in the Indian capital celebrate by setting off crackers and fireworks. 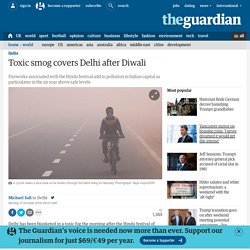 Air quality in the Indian capital, one of the world’s most polluted cities, is usually very poor due to road dust, open fires, vehicle exhaust fumes, industrial emissions and the burning of crop residues in neighbouring states. But the density of some harmful particles and droplets in the air spikes for days after Diwali and can reach up to 42 times the safe limit. An air quality station at the US embassy in Chanakyapuri, one of the city’s greener districts, recorded a PM2.5 level of 999 on Monday morning. India’s pollution control board sets the safe limit for PM2.5 – which measures particulate matter smaller than 2.5 micrometres – at 60. How are cities around the world tackling air pollution? 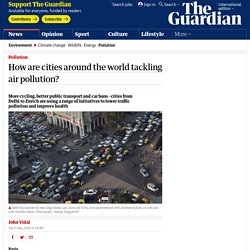 A long section of the Right Bank of the river Seine is now car-free and and a monthly ban on cars has come into force along the Champs-Elysées. Delhi Reports that pollution levels in Delhi matched those in Beijing spurred the city to ban all new large diesel cars and SUVs with engines of more than 2,000CC and to phase out tens of thousands of diesel taxis. The city has experimented with alternately banning cars with odd and even number plates and is now encouraging Uber-style minibuses on demand. Beijing bans highly polluting cars during smog alerts.

Next year, Beijing will ban highly polluting old cars from being driven whenever air-quality alerts are issued in the city or neighbouring regions, according to its environmental protection bureau. 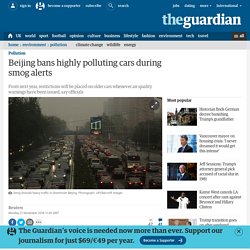 China has adopted various measures over the years to reduce the smog shrouding many of the country’s northern cities in winter, causing hazardous traffic conditions and disrupting daily life. From 15 February, vehicles that don’t meet the government’s current standard on emissions (those more than 10 years old) will be banned in Beijing’s main urban area whenever orange or red alerts are issued in Beijing or neighbouring Hebei province and Tianjin city. Vehicles breaking the restrictions will be fined 100 yuan (£11.75) every four hours they are on the road, the bureau added. Nike and Adidas show cautious support for eco-friendly dye technology. It has been a significant step forward for the textile sector.

Up until now the effluent from dye houses that can often be seen in rivers flowing through the textile manufacturing areas of India, China and elsewhere is a result of unabsorbed dyes, chemicals and heavy salts that are used during the dyeing process. A number of companies, DyeCoo, ColorZen and AirDye have set out to address this pollution by designing waterless dye technology. The result is a reduction in wastewater, energy, chemicals and toxic discharge to such a degree that it could revolutionise the textile industry. Major brands including Nike and Adidas have been integrating waterless dye technologies into their product lines, but costs and limitations have experts in the textile industry worried that the support will not last.

“Right now there is very low uptake of use of these technologies,” says Andrew Filarowski, technical director at Society of Dyers and Colourists. Tehran shuts schools as thick smog is linked to hundreds of deaths. At this time of the year, citizens of Tehran are accustomed to a thick curtain of fog that falls across the city, veiling everything from the 435 metre-tall Milad tower to the nearby Alborz mountains. 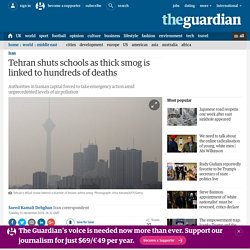 This week, however, the blanket of smog smothering the Iranian capital has been blamed for a string of deaths and prompted unprecedented emergency measures by the city’s authorities. Habib Kashani, a member of Tehran’s municipal council, said on Tuesday that pollution in Tehran had led to the death of 412 citizens in the past 23 days, according to the state news agency, Irna. City authorities announced that all schools would be closed on Wednesday. The concentration of ultra-fine airborne particles (known as PM2.5) reached more than 150 this week, setting a new record. Poor nations pledge deep emissions cuts at Marrakech summit. Some of the world’s poorest countries have pledged to dramatically cut their carbon emissions and rapidly move to 100% renewable power, as the UN climate summit in Marrakech drew to a close on Friday. 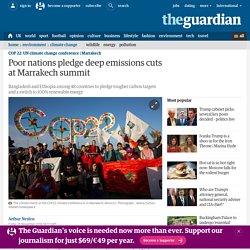 The announcement followed a final declaration by nearly 200 nations affirming their “highest political commitment” to combatting climate change, in a thinly-coded warning to the incoming US president, Donald Trump. But the talks ended with what the outgoing president of the conference, Salaheddine Mezouar, called a developing emergency over climate finance. Speaking to the Guardian after bilateral talks with the UK and US, Mezouar, who is also Morocco’s foreign minister, said: “It is a priority of this COP22 presidency to mobilise finance as this is really becoming a necessity and an emergency.” A UN source insisted that the $100bn target would be met by 2020 but said trillions would be needed for development to be made more sustainable.