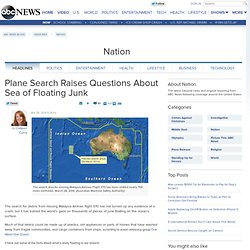 (Australian Maritime Safety Authority) The search for debris from missing Malaysia Airlines flight 370 has not turned up any evidence of a crash, but it has trained the world’s gaze on thousands of pieces of junk floating on the ocean’s surface. Much of that debris could be made up of plastics, old appliances or parts of homes that have washed away from fragile communities, and cargo containers from ships, according to ocean advocacy group One World One Ocean.

Check out some of the facts about what’s really floating in our oceans: Environment for Kids: Water Pollution. Science >> Earth Science >> Environment What is water pollution? 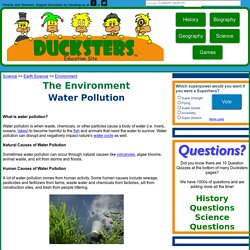 Water pollution is when waste, chemicals, or other particles cause a body of water (i.e. rivers, oceans, lakes) to become harmful to the fish and animals that need the water to survive. Water pollution can disrupt and negatively impact nature's water cycle as well. Natural Causes of Water Pollution Sometimes water pollution can occur through natural causes like volcanoes, algae blooms, animal waste, and silt from storms and floods.

Human Causes of Water Pollution A lot of water pollution comes from human activity. Oil Spills Some of the most famous incidents of water pollution have been oil spills. Acid Rain Air pollution can also have a direct effect on water pollution. Plastic Ocean Waste Levels Going Up, Study Says. Photo Some eight million metric tons of plastic waste makes its way into the world’s oceans each year, and the amount of the debris is likely to increase greatly over the next decade unless nations take strong measures to dispose of their trash responsibly, new research suggests. 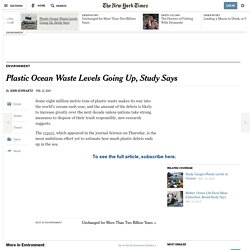 The report, which appeared in the journal Science on Thursday, is the most ambitious effort yet to estimate how much plastic debris ends up in the sea. Jenna Jambeck, an assistant professor of environmental engineering at the University of Georgia and lead author of the study, said the amount of plastic that entered the oceans in the year measured, 2010, might be as little as 4.8 million metric tons or as much as 12.7 million. The paper’s middle figure of eight million, she said, is the equivalent of “five plastic grocery bags filled with plastic for every foot of coastline in the world” — a visualization that, she said, “sort of blew my mind.” Ms. Great Pacific Garbage Patch - National Geographic Society. The Great Pacific Garbage Patch is a collection of marine debris in the North Pacific Ocean.

These areas of spinning debris are linked together by the North Pacific Subtropical Convergence Zone, located a few hundred kilometers north of Hawaii. This convergence zone is where warm water from the South Pacific meets up with cooler water from the Arctic. Ocean Heroes: The Plastics Problem. New Study Shows Plastic in Oceans Is on the Rise.

Scientists have come up with a new way to measure ocean trash—and the numbers are even worse than thought. 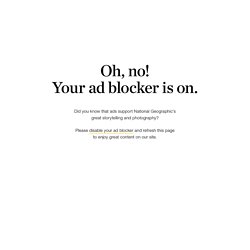 In 2010, eight million tons of plastic trash ended up in the ocean from coastal countries—far more than the total that has been measured floating on the surface in the ocean's "garbage patches. " That's the bad news. The even worse news is that the tonnage is on target to increase tenfold in the next decade unless the world finds a way to improve how garbage is collected and managed.

The findings are part of a groundbreaking study published Thursday in Science that for the first time quantifies how much garbage flows into the world's oceans every year.

Trash at the bottom of the sea

Animals and pollution. Solutions. Trash in Ocean. Ocean trash breakdown list. Life in Antarctica Relies on Shrinking Supply of Krill. On the Antarctic island of South Georgia, in February, toward the middle of what passes for summer at the bottom of the world, I hurried through the ruined whaling station of Grytviken. 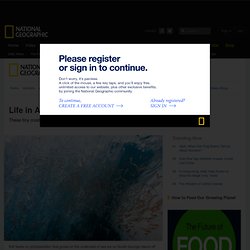 I had an appointment at the British Antarctic Survey station on the opposite side of King Edward Cove. I was to interview a marine ecologist working on krill. I did not want to be late.