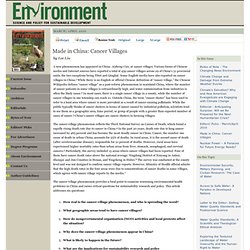 Outside China, the term “cancer cluster” has been used to refer to a local area where cancer is more prevalent as a result of cancer-causing pollutants. Many Chinese scholars have been studying cancer villages. Figure 1. Www.springerlink.com/content/k8x66w6442806541/fulltext.pdf. Nitrogen (N) contamination in the Yellow River mainstream andits tributaries was studied using data from 1960 to 2000 from312 monitoring sites in the Yellow River system. 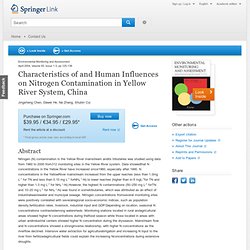 Data showedthat N concentrations in the Yellow River have increased since1960, especially after 1990. N concentrations in the YellowRiver mainstream increased from the upper reaches (less than 1.0mg L-1 for TN and less than 0.10 mg L-1 forNH4 +-N) to lower reaches (higher than 4–5 mgL-1for TN and higher than 1.0 mg L-1 for NH4 +-N).However, the highest N contaminations (50–250 mg L-1 forTN and 10–20 mg L-1 for NH4 +-N) was found in sometributaries, which was attributed as an effect of industrialwastewater and municipal sewage. Nitrogen concentrations fromseveral monitoring sites were positively correlated with severalregional socio-economic indices, such as population density,fertilization rates, livestock, industrial input and GDP.Depending on location, seasonal N concentrations contrastedamong watersheds. 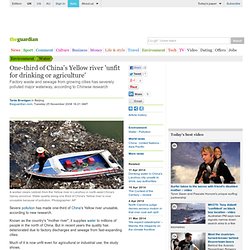 But in recent years the quality has deteriorated due to factory discharges and sewage from fast-expanding cities. Much of it is now unfit even for agricultural or industrial use, the study shows. Pollution worsens on the Yellow River system. A Chinese water resources official on Sunday called on people to improve the awareness of water saving and protection in a bid to curb pollution of rivers from spreading and worsening. 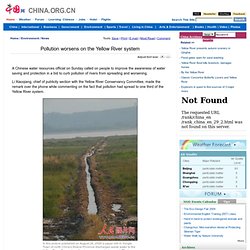 Li Xiaoqiang, chief of publicity section with the Yellow River Conservancy Committee, made the remark over the phone while commenting on the fact that pollution had spread to one third of the Yellow River system. With a mainstream of 5,464 km, the Yellow River, billed as the "mother river" of China, originates from Qinghai province, flows eastward through Sichuan and Gansu provinces, Ningxia Hui and Inner Mongolia autonomous regions, and Shaanxi, Shanxi and Henan provinces before emptying into the Bohai Sea from Shandong Province in east China.

It has 35 main tributaries. China's Yellow River Choking on Pollution. Pollution of the Yellow River, China's second longest river after the Yangtze, is getting worse, with over 66 percent of the water undrinkable, according to a newly released report on Yellow River Water Resources. 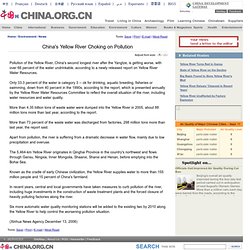 Only 33.3 percent of the water is category 3 -- ok for drinking, aquatic breeding, fisheries or swimming, down from 40 percent in the 1990s, according to the report, which is presented annually by the Yellow River Water Resources Committee to reflect the overall situation of the river, including water resources and water quality. More than 4.35 billion tons of waste water were dumped into the in 2005, about 88 million tons more than last year, according to the report. 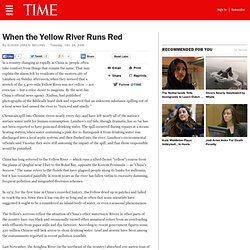 That may explain the alarm felt by residents of the western city of Lanzhou on Sunday afternoon, when they noticed that a stretch of the 3,400-mile Yellow River was not yellow — not even tan — but a color closer to magenta. By the next day China's official news agency, Xinhua, had published photographs of the Biblically hued slick and reported that an unknown substance spilling out of a local sewer had caused the river to "turn red and smelly. " Chemicals spill into Chinese rivers nearly every day, and have left nearly all of the nation's surface water unfit for human consumption.

Lanzhou's red tide, though dramatic, has so far has not been reported to have poisoned drinking water. Yangtze River Pollution Imperils Hundreds of Millions. By Tang Wen & Gao ZitanEpoch Times Staff Created: November 20, 2011 Last Updated: December 11, 2011 Two workers clean up trash along the bank of the Yangtze River near the Three Gorges Dam in Yichang, in central China's Hubei province on Aug. 1, 2010. 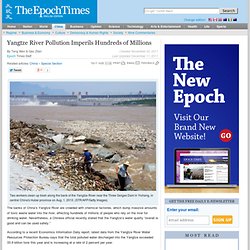 (STR/AFP/Getty Images) The banks of China’s Yangtze River are crowded with chemical factories, which dump massive amounts of toxic waste water into the river, affecting hundreds of millions of people who rely on the river for drinking water. Nevertheless, a Chinese official recently stated that the Yangtze’s water quality “overall is good and can be used safely.” According to a recent Economics Information Daily report, latest data from the Yangtze River Water Resources Protection Bureau says that the total polluted water discharged into the Yangtze exceeded 33.9 billion tons this year and is increasing at a rate of 2 percent per year. 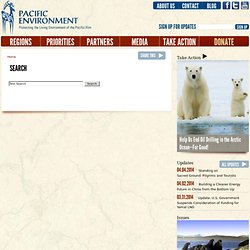 All Updates Updates 04.04.2014 Standing on Sacred Ground: Pilgrims and Tourists 04.02.2014 Building a Cleaner Energy Future in China from the Bottom Up 03.31.2014 Update: U.S. Issues Climate ChangeFreshwaterBiodiversityOceansEnergyCommunities. Yangtze river 'cancerous' with pollution. China's longest river is "cancerous" with pollution and rapidly dying, threatening drinking water supplies in 186 cities along its banks, including Shanghai, experts warned on Monday. 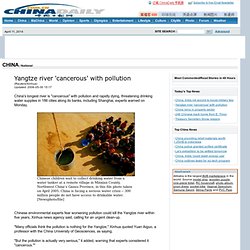 Chinese environmental experts fear worsening pollution could kill the Yangtze river within five years, Xinhua news agency said, calling for an urgent clean-up. "Many officials think the pollution is nothing for the Yangtze," Xinhua quoted Yuan Aiguo, a professor with the China University of Geosciences, as saying. "But the pollution is actually very serious," it added, warning that experts considered it "cancerous.

"" Yellow River. Not a drop of rain has fallen in months, and the only clouds come from sandstorms lashing across the desert. 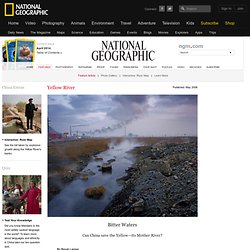 But as the Yellow River bends through the barren landscape of north-central China, a startling vision shimmers on the horizon: emerald green rice fields, acres of yellow sunflowers, lush tracts of corn, wheat, and wolfberry—all flourishing under a merciless sky. This is no mirage.