We Might Be Radioactive - Croik. The Amazing Spider-Man and The Avengers do not belong to me and are being used here without permission but for no profit. 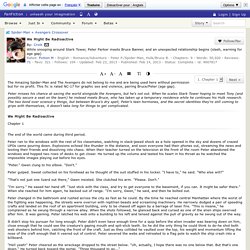 This fic is rated NC-17 for graphic sex and violence, pairing Bruce/Peter (age gap). Peter misses his chance at saving the world alongside the Avengers, but he's not out. When he scales Stark Tower hoping to meet Tony (and possibly secure a seat on the team) he instead meets Bruce, who has taken up a temporary residence while he continues his Hulk research. The two bond over science-y things, but between Bruce's dry spell, Peter's teen hormones, and the secret identities they're still coming to grips with themselves, it doesn't take long for things to get complicated. We Might Be Radioactive Chapter 1 The end of the world came during third period.

Peter ran to the windows with the rest of his classmates, watching in slack-jawed shock as a hole opened in the sky and dozens of crazed UFOs came pouring down. Let's Glow in the Dark - Croik. Sequel to We Might Be Radioactive. 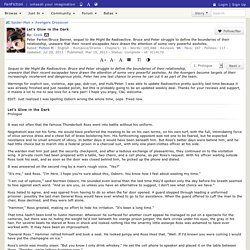 Bruce and Peter struggle to define the boundaries of their relationship, unaware that their recent escapades have drawn the attention of some very powerful assholes. As the Avengers become targets of their increasingly incoherent and dangerous plots, Peter has one last chance to prove he can cut it as part of the team.

Warnings for explicit sex, violence, age gap, dub-con, and Hulk/Peter. I was able to update Radioactive pretty quickly last time because it was already finished and just needed polish, but this is probably going to be an updated weekly deal. Thanks for your reviews and support, it means a lot to me to see love for a rare pair! EDIT: Just realized I was spelling Osborn wrong the whole time, oops. Let's Glow in the DarkPrologue It was not often that the famous Thunderbolt Ross went into battle without his uniform.

Negotiation was not his forte. Heroes Have In-laws, Too - Croik. This fic takes place after We Might Be Radioactive and Let's Glow in the Dark. 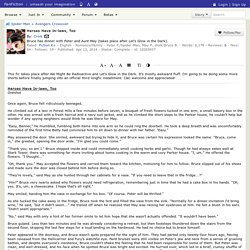 It's mostly awkward fluff. I'm going to be doing some more shorts before finally jumping into an official third longfic installment. C&C welcome and appreciated! Heroes Have In-laws, TooOneshot Once again, Bruce felt ridiculously teenaged. He climbed out of a taxi in Forest Hills a few minutes before seven, a bouquet of fresh flowers tucked in one arm, a small bakery box in the other. "Easy, Banner," he mumbled, fumbling both items into one arm so he could ring the doorbell. May answered the door. "Thank you; so am I. " "Oh, thank you. " "They're lovely," said May as she hunted through her cabinets for a vase.

"Hm? " May smiled, handing him the vase in exchange for his box. As she tucked the cake away in the fridge, Bruce took the hint and filled the vase from the sink. I'll Find a Way to Let You Have Your Way With Me - Croik. This Counts as Bonding, Sure - Croik. Part of my Bruce/Peter fic series, taking place a few weeks after "I'll Find a Way... 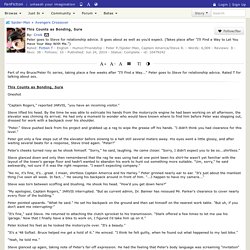 " Peter goes to Steve for relationship advice. Rated T for talking about sex. This Counts as Bonding, Sure Oneshot "Captain Rogers," reported JARVIS, "you have an incoming visitor. " Steve lifted his head. My Boyfriend is Indestructible - Croik. This is another fic in my Radioactive Boyfriends series. 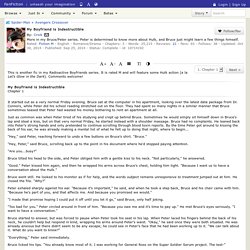 It is rated M and will feature some Hulk action (a la Let's Glow in the Dark). Comments welcome! My Boyfriend is Indestructible Chapter 1 It started out as a very normal Friday evening. Bruce sat at the computer in his apartment, looking over the latest data package from Dr. Just as common was when Peter tired of his studying and crept up behind Bruce. "Hey," said Peter, reaching forward to undo a few buttons on Bruce's shirt. "Hey, Peter," said Bruce, scrolling back up to the point in his document where he'd stopped paying attention. 66 Weeks of Aftermath - Croik. I came out of TWS really wanting to write B/P fic in the aftermath of the SHIELD collapse, but I didn't want to just timeskip through the other Phase 2 movies, so this fic is my compromise. 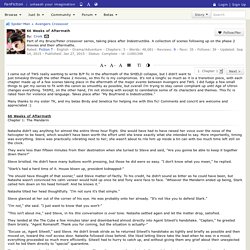 It's not a longfic so much as it is a transition piece, with each chapter made up of a few scenes taking place in the aftermath of the major events between Avengers and TWS. I did fudge a few small things to get my series to fit with the canon as smoothly as possible, but overall I'm trying to stay canon compliant up until Age of Ultron changes everything. TASM2, on the other hand, I'm not sticking with except to cannibalize some of its characters and themes. This fic is rated Teen for violence and language.

Takes place after "My Boyfriend is Indestructible. " Many thanks to my sister TK, and my betas Birdy and Jenetica for helping me with this fic! 66 Weeks of AftermathChapter 1: The Mandarin Natasha didn't say anything for almost the entire three hour flight. Steve bristled.