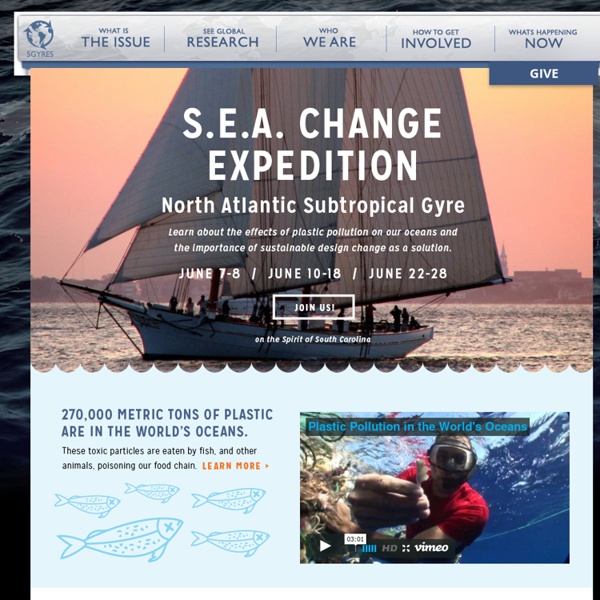 Related:  Plastic in the ocean

Environment: Pollution in the Pacific - A watery garbage patch haltzoom prevnext Deadly Debris (1/9) A dead albatross chick photographed on Midway Atoll, a strip of sand and coral in the North Pacific. These are the actual stomach contents of this ... more Plague of Plastic (2/9) A sample of North Pacific Ocean water full of plastic debris held by Captain Charles Moore, founder of the Algalita Marine Research Foundation and ... more World’s Biggest Garbage Dump (3/9) A map shows the North Pacific Gyre, a vast area of high pressure weather into which ocean currents deposit garbage. The system is circulatory, so ... more Death Trap (4/9) A tangle of discarded fishing nets drifts just below the ocean’s surface. Can We Cleanup?

Hawaii Wildlife Fund - A non-profit wildlife conservation organization WildAid | Why is Plastic Pollution a Problem in Our Oceans? A sea turtle spots a plastic bag floating among the waves. To him, it looks like a jellyfish, its general shape and consistency swaying and catching the light in just the right way. He swims toward it and ingests the bag in one gulp, satisfying his hunger, and then goes on his away. In actuality, that plastic bag lines his gut, causing digestive blockages and the sea turtle’s eventual death from starvation. This is why a sea turtle could confuse a plastic bag with a jellyfish (Plastic Pollution Coalition) This story is all too common in the marine environment. Only 9% of plastics in the United States are recycled, and since most are not biodegradable, much of this refuse floats around for years, breaking down into smaller and smaller pieces that are invisible to the naked eye. WildAid currently works with marine parks throughout Ecuador to remove ghost nets and discarded fishing line from the sea during regular patrols.

Garbology Featured Activity: Waste-Less Lunch Lead your students in learning about natural resources used in common packaging materials. Challenge your students to conserve natural resources through their lunch choices. Check out this and other Garbology lessons for the classroom » Featured Activity: Conduct a Waste Assessment Do you know how much waste your school puts in landfills each week? Learn how and check out other Garbology activities » Featured Activity: Composting With the FBI The FBI turn waste into healthy soil. Bring Garbology home » Plastic Impacts Health | Plastic Ocean | Arizona Alternative Medicine Reprinted with permission from By Susan Casey, Photographs by Gregg Segal January 6, 2007 A vast swath of the Pacific, twice the size of Texas, is full of a plastic stew that is entering the food chain. Fate can take strange forms, and so perhaps it does not seem unusual that Captain Charles Moore found his life's purpose in a nightmare. It happened on August 3, 1997, a lovely day, at least in the beginning: Sunny. Returning to Southern California from Hawaii after a sailing race, Moore had altered Alguita's course, veering slightly north. The area's reputation didn't deter Moore. It began with a line of plastic bags ghosting the surface, followed by an ugly tangle of junk: nets and ropes and bottles, motor-oil jugs and cracked bath toys, a mangled tarp. How did all the plastic end up here? "Everybody's plastic, but I love plastic. This afternoon, Moore strides the grounds. Bad enough. On land, things are equally gruesome. It has a point.

Sculpt the Future Foundation 21st-Century Capitalism Is Killing Ocean Life | Yves Engler Sea turtle lies lifeless, wrapped in plastic on the shores of Porto de Galinhas beach on January 12, 2017 in Ipojuca, Brazil. (Photo: Marcos Souza/Brazil Photo Press/Getty Images) For 21st century capitalism the more disposable the better. Ocean life and human health be damned. According to a recent Ellen MacArthur Foundation study, the world's oceans are set to have more plastic than fish by 2050. At the current rate of production and disposal the net weight of plastic in the oceans will be greater than that of fish in a little over three decades. There are currently 150 million tonnes of plastic debris floating in the world's oceans. The Canada-U.S. During the second half of the 20th century plastic production rose 20 fold and it's on pace to double over the next two decades. Approximately half of plastic is for single use. Before wreaking havoc on ocean fauna, plastics also harm human health. The toxins in plastics should be better regulated.

What’s the size of Texas, made of plastic, and floating in the Pacific Ocean? | HaltonRecycles If you guessed the “Great Pacific Garbage Patch,” you’re right. The Great Pacific Garbage Patch is also known as the largest landfill in the world, and unfortunately it is not found in a thoroughly planned, designed and controlled waste management facility — it’s found in the middle of the Pacific Ocean. The name itself is quite deceiving and conjures up images of a large, solid, island-like mound of garbage sitting in the ocean or something similar to the infamous garbage barges of New York City. This is not the case. The Great Pacific Garbage Patch is in fact more of a trash soup, found floating in both the Eastern and Western Pacific Oceans and is connected by a thin 6,000 mile long current known as the sub-tropical convergence zone. The Eastern Garbage Patch floats between Hawaii and California, and the Western Garbage Patch floats between Japan to the west side of Hawaii. Ocean trash is a problem for all of the marine wildlife, and ultimately becomes a concern for humans as well.

Story Of Stuff Take Three Guesses At What Researchers Just Found At The North Pole A British-led expedition to the Arctic has made a depressing discovery in the middle of the Arctic Ocean: polystyrene. The researchers found chunks of plastic and polystyrene on ice floes in the ocean where previously they hadn’t been able to even access due to sea ice. This is the furthest north of any ocean that plastic detritus has been discovered, only 1,000 miles from the North Pole. It would seem there really is no getting away from plastics in the oceans. The researchers were part of Pen Hadow’s Arctic Mission to sail to the North Pole, collecting important data along the way, which is still taking place. The team wasn't expecting to find polystyrene so far from land, but then they weren’t expecting to be able to access an area that is usually covered by ice all year round. “For the 25 years I have been exploring the Arctic I have never seen such large and very visible items of rubbish,” said Hadow, the Guardian reports. [H/T: The Guardian]

Related:
Related:  Plastic in the ocean