Yes, Immigration Hurts American Workers. I’ve been studying immigration for 30 years, but 2016 was the first time my research was cited in a convention speech. 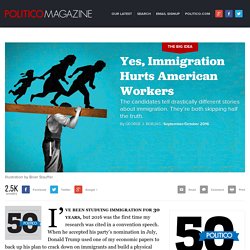 When he accepted his party’s nomination in July, Donald Trump used one of my economic papers to back up his plan to crack down on immigrants and build a physical wall: “Decades of record immigration have produced lower wages and higher unemployment for our citizens, especially for African-American and Latino workers,” he told the cheering crowd. But he was telling only half the story. Hillary Clinton, for her part, seemed to be telling only the other half. At her convention a week later, Clinton claimed that immigrants, both legal and illegal, improve the economy for everyone. CAUGHT: Suspected Phoenix Serial Killer Arrested: Was in U.S. Illegally. Phoenix, AZ – Authorities have arrested a man they believe to be the ‘Serial Street Shooter’, hopefully putting an end to the constant fear that has gripped the city of Phoenix since March of this year. 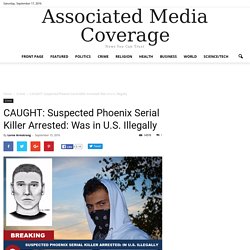 At approximately 5:00 am Thursday, the Phoenix Police Department working in conjunction with the FBI and Maricopa County SWAT, descended upon an undisclosed residence in the Maryvale neighborhood on the city’s west side, near the intersection of W Roma Ave and N 57th Drive. Strategic Negligence: How the Sierra Club's Distortions on Border and Immigration Policy Are Undermining its Environmental Legacy. Download a pdf of this Memorandum Jerry Kammer is a Senior Research Fellow at the Center for Immigration Studies. 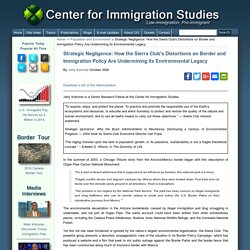 In the summer of 2003, a Chicago Tribune story from the Arizona-Mexico border began with this description of Organ Pipe Cactus National Monument: Immigrants Replace Low-Skill Natives in the Workforce. Evidence from the American Time-Use Survey Download a PDF of this Backgrounder Jason Richwine, PhD, is an independent public policy analyst based in Washington, D.C., and a contributing writer at National Review. 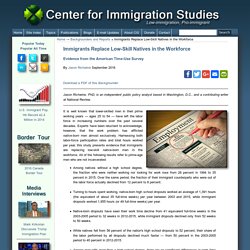 It is well known that lower-skilled men in their prime working years — ages 25 to 54 — have left the labor force in increasing numbers over the past several decades. Experts have been reluctant to acknowledge, however, that the work problem has afflicted native-born men almost exclusively. Harnessing both labor-force participation rates and total hours worked per year, this study presents evidence that immigrants are replacing low-skill native-born men in the workforce.

Among natives without a high school degree, the fraction who were neither working nor looking for work rose from 26 percent in 1994 to 35 percent in 2015. In summary, the United States has been a magnet for low-skill immigration even as low-skill natives have worked less and less. Introduction Methodology Results. Observations Concerning the Increase of Mankind, 1751.

Race and IQ Related Genes – The Alternative Hypothesis. Summary: Over the past 5 years, a variety of specific genes have been shown to influence IQ. 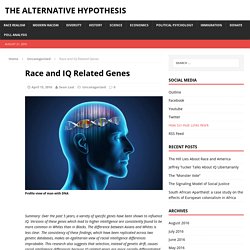 U.S. officials are trying to establish closer cooperation with various Latin American nations to combat an increase in the number of illegal migrants from Asia, Africa, and the Middle East attempting to sneak into the United States. 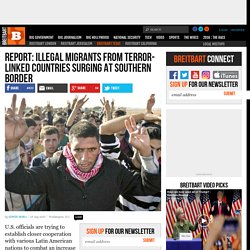 Between October 2015 and May 2016, the Customs and Border Protection (CBP) agency, a component of the U.S. Department of Homeland Security (DHS), detained 5,350 African and Asian migrants along the U.S. -Mexico border, according to Reuters. IRS Defends Giving Refunds to Illegal Immigrants. Strategic Negligence: How the Sierra Club's Distortions on Border and Immigration Policy Are Undermining its Environmental Legacy. Pew Research Center: Immigration to Add 103 million to U.S. Population Between 2015 and 2065. Updated: by Eric Ruark The Pew Research Center has released a new report that projects the U.S. population will reach 441 million in 2065 – an increase of 117 million from the current number. 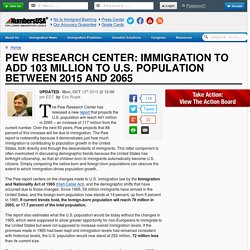 Over the next 50 years, Pew projects that 88 percent of this increase will be due to immigration. The Pew report is noteworthy because it demonstrates just how much immigration is contributing to population growth in the United States, both directly and through the descendants of immigrants. This latter component is often overlooked in discussing demographic trends because the United States has birthright citizenship, so that all children born to immigrants automatically become U.S. citizens. The Pew report centers on the changes made to U.S. immigration law by the Immigration and Nationality Act of 1965 (Hart-Celler Act), and the demographic shifts that have occurred due to those changes.