Exploring the World in Your Class. In the past several years, the National Endowment of the Humanities (NEH) has supported and funded digital games, including Mission US: City of Immigrants, a game about the immigrant experience. 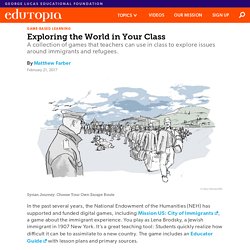 You play as Lena Brodsky, a Jewish immigrant in 1907 New York. It’s a great teaching tool: Students quickly realize how difficult it can be to assimilate to a new country. The game includes an Educator Guide with lesson plans and primary sources. I recently spoke with Marc Ruppel, senior program officer at the NEH. Ruppel’s vision of games in classrooms happens to align with my findings in field research: Games—particularly those in the humanities (social studies, English language arts)—can be the hub, or centerpiece, of learning in a classroom. Games to Teach the Immigrant Experience In my social studies class, I teach an immigration unit that begins with BrainPOP’s Immigration and Citizenship videos. To frame themes of immigration, try iCivics’ free Immigration and Citizenship game. The Lost Boys of Sudan - National Geographic Society. 1. 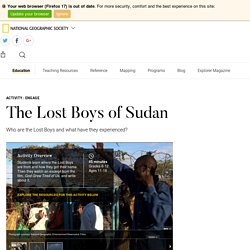 Pre-teach the vocabulary. Migrant crisis: Migration to Europe explained in seven charts. Image copyright Getty Images More than a million migrants and refugees crossed into Europe in 2015, sparking a crisis as countries struggled to cope with the influx, and creating division in the EU over how best to deal with resettling people. 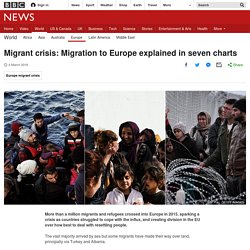 The vast majority arrived by sea but some migrants have made their way over land, principally via Turkey and Albania. Europe's Migrant Crisis. Introduction. 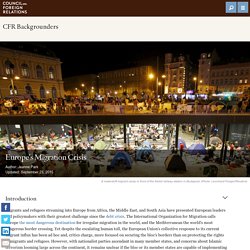 Refugee Stories: Mapping a Crisis. Teaching with the News Objectives Students will: Explore the human geography of the current refugee crisis.Employ data to create a map of the crisis.Examine one refugee’s story and use it to map his or her experiences.Consider challenges facing the international community and weigh responses to the crisis. 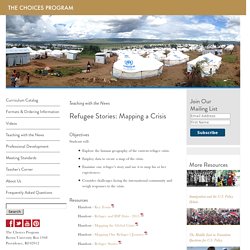 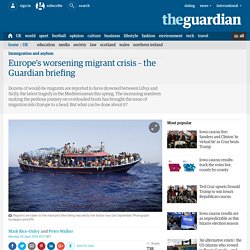 The perils facing migrants from Africa and the Middle East trying to get to Europe across the Mediterranean has been underscored once again with another deadly shipwreck off the Libyan coast, in which as many as 700 people are feared dead. The toll brings to more than 1,500 the number who have perished already this year, making 2015 far deadlier than 2014, which itself was a record year for tragedy on the Mediterranean, with more than 3,000 deaths.

With economic decay, war, persecution and unemployment gripping at least a dozen countries on Europe’s southern rim, the surge of migration north has overwhelmed authorities in Europe, which has struggled to articulate a single coherent policy and, say critics, played into the hands of unscrupulous people traffickers. How this happened Thousands were saved last year by Italy’s search and rescue operation, Mare Nostrum, but that unit was stood down last autumn, replaced by a European operation with a much flimsier mandate. Amid Record Waves of Refugees, Italy Finding Limits to Its Compassion. PALERMO, Italy—On a mid-September afternoon the sun beat down on cruise ships and freighters moored in Palermo's port. 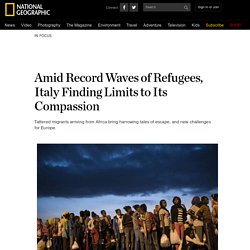 In front of white canvas tents—impromptu clinics erected earlier in the day—masked medics from the Italian Red Cross, police officers, fire fighters, employees of the Dipartamento della Protezione Civile (Civil Protection Department), priests, translators, officials with the local prefecture, and journalists waited expectantly. Ambulances and water trucks stood nearby. New arrivals—442 of them, most having embarked on a perilous Mediterranean crossing from Libya—were due any moment at the port in Sicily. They were hours late: Heavy seas had impeded their transfer from the commercial ship that had rescued them at sea to the vessels of the Italian Coast Guard. A coast guard patrol boat finally cut the waters around an anchored freighter and came alongside, its deck jammed with women in Muslim head scarves, unshaven men young and old, and crying children.

Hundreds of migrant deaths: What is Europe going to do? Authorities still don't know the fate of many of the passengers, including children, who were on the large ship bound from Libya to Europe that capsized Saturday night in the frigid waters of the Mediterranean Sea. 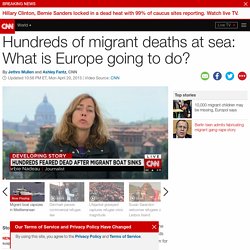 That sinking may be the worst in a series of disasters in which migrants have lost their lives on vessels that are too rickety to survive long voyages. "Gangs of criminals are putting people on a boat, sometimes even at gunpoint," Maltese Prime Minister Joseph Muscat said. Migrations into Europe. Amid flood of refugees to Europe, Italy opens a back door. What You Need to Know About the E.U.’s Refugee Crisis. At least 700, but perhaps as many as 950, refugees are feared dead after a boat capsized off the coast of Libya on Sunday. 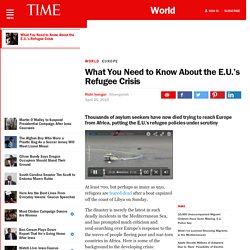 The disaster is merely the latest in such deadly incidents in the Mediterranean Sea, and has prompted much criticism and soul-searching over Europe’s response to the the waves of people fleeing poor and war-torn countries in Africa. Here is some of the background to the developing crisis: Who are the migrants attempting to cross the Mediterranean Sea? Although it is still unclear exactly which countries the migrants feared dead in Sunday’s disaster hail from, refugees being transported across the Mediterranean Sea by smugglers come mostly from North African and West Asian countries like Yemen, Nigeria, Gambia, Syria and Libya, to name a few. Some come from even further afield, however. Where are they going and why?