The Treaty of Guadalupe Hidalgo, and the Future of the Chicano/Mexicano People. The following comes to us from the recently started Siglo de Lucha blog. 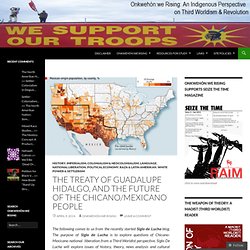 The purpose of Siglo de Lucha is to explore questions of Chicano-Mexicano national liberation from a Third Worldist perspective. Siglo De Lucha will explore issues of history, theory, news analysis and cultural reviews. February 5th was the anniversary of the signing of the Treaty of Guadalupe Hidalgo in 1848. This treaty officially ended what has been known as the Mexican War, and which subsequently ceded over half the territory of the nation of Mexico over to the United States.

Many also see it as the beginning of the Chicano people, a colonized nation within U.S. borders. This year in 2014 on that date, The Economist, a weekly British mainstream news magazine, posted a blurb about this date, along with a demographic map: On February 2nd 1848, following a short and one-sided war, Mexico agreed to cede more than half its territory to the United States. Citizenship Rights. The New Mexico Constitution. The New Mexico Constitution is a unique governance document that reaffirms the cultural diversity of the state and its varied history. 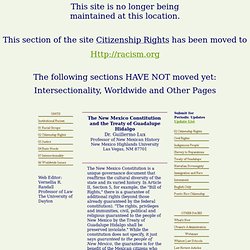 In Article II, Section 5, for example, the "Bill of Rights," there is a guarantee of additional rights (beyond those already guaranteed by the federal constitution). "The rights, privileges and immunities, civil, political and religious guaranteed to the people of New Mexico by the Treaty of Guadalupe Hidalgo shall be preserved inviolate. " While the constitution does not specify, it just says guaranteed to the people of New Mexico, the guarantee is for the benefit of the Mexican citizens who resided in New Mexico in 1848. There are other sections in the Constitution that likewise reflect this uniqueness and the multi-cultural facets of New Mexican history. In the current Immigration Debate and the Treaty of Guadalupe Hidalgo. Which also give a one year time frame and protected the rights "in the mean time". 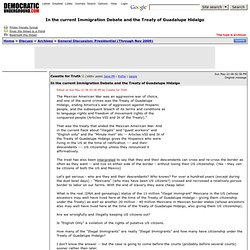 I was raised in California and taught that Mexicans had a right to speak Spanish and a right to their culture based on this treaty. Having read it as an adult, I'm not so sure that was its intent. In fact, there are time limits in a lot of treaties. Mexicans now established in territories previously belonging to Mexico, and which remain for the future within the limits of the United States, as defined by the present treaty, shall be free to continue where they now reside, or to remove at any time to the Mexican Republic, retaining the property which they possess in the said territories, or disposing thereof, and removing the proceeds wherever they please, without their being subjected, on this account, to any contribution, tax, or charge whatever.

In the said territories, property of every kind, now belonging to Mexicans not established there, shall be inviolably respected. Podcast Episode 43 - Land Adjudication, Citizenship and Immigration - Treaty of Guadalupe Hidalgo - Video with Transcript - Arizona State Museum. What I'm going to talk about this morning are four points. 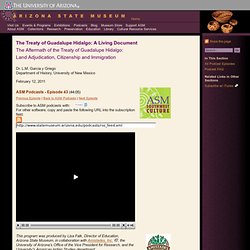 One is going to go very quickly and others are going to take longer. The first one is the consequences for Mexico, particularly for its politics and its foreign policy. A second point—and it's going to be a rather brief one but an important one—is the citizenship consequences of the treaty. The third point is international migration. We think of it as immigration. The Forgotten Promises of the Treaty of Guadalupe Hidalgo. Jon Michael Haynes Excerpted Wrom: UCDDJBLVLMHAALPTCXLYRWTQTIPWIGYOKSTT Saying We're Sorry? 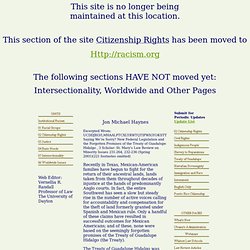 New Federal Legislation and the Forgotten Promises of the Treaty of Guadalupe Hidalgo , 3 Scholar: St. Mary's Law Review on Minority Issues 231-264, 232-236 (Spring 2001)(221 footnotes omitted) Recently in Texas, Mexican-American families have begun to fight for the return of their ancestral lands, lands taken from them throughout decades of injustice at the hands of predominantly Anglo courts. In fact, the entire Southwest has seen a slow but steady rise in the number of active voices calling for accountability and compensation for the theft of land formerly granted under Spanish and Mexican rule.