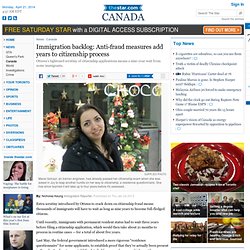 Until recently, immigrants with permanent resident status had to wait three years before filing a citizenship application, which would then take about 21 months to process in routine cases — for a total of about five years. Last May, the federal government introduced a more rigorous “residence questionnaire” for some applicants, to establish proof that they’ve actually been present in Canada. Applicants were told the detailed four-page forms — which must be accompanied by proof such as tax returns, pay stubs, and airline tickets to document even brief absences — would take 15 months to process. Refugee claims hit ‘historic low’ as Ottawa’s policy faces fresh criticism.

The number of people claiming refugee status in Canada reached what Ottawa calls a “historic low” in 2013 after it brought in changes to speed up the program by deterring applicants from safer countries. 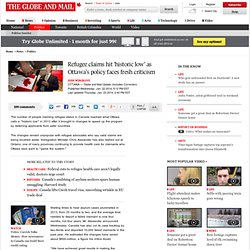 The changes remain unpopular with refugee advocates who say valid claims are being brushed aside. Immigration Minister Chris Alexander has also lashed out at Ontario, one of many provinces continuing to provide health care for claimants who Ottawa says want to “game the system.” Waiting times to hear asylum cases plummeted in 2013, from 20 months to two, and the average time needed to deport a failed claimant is now four months, not four years, Mr. 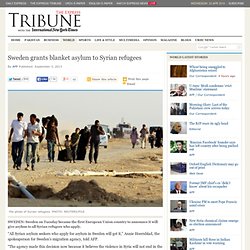 File photo of Syrian refugees. PHOTO: REUTERS/FILE SWEDEN: Sweden on Tuesday became the first European Union country to announce it will give asylum to all Syrian refugees who apply. “All Syrian asylum seekers who apply for asylum in Sweden will get it,” Annie Hoernblad, the spokesperson for Sweden’s migration agency, told AFP. “The agency made this decision now because it believes the violence in Syria will not end in the near future.”

The decision, which will give refugees permanent resident status, is valid until further notice, added Hoernblad. Baby boomers not to blame for youth unemployment - Canada. A commonly held opinion is that older workers who stay on the job past the usual retirement dates and baby boomers just hanging on to their jobs are somehow denying young people entry to the workforce. 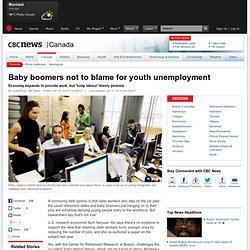 But researchers say that's not true. U.S. research economist April Yanyuan Wu says there's no evidence to support the view that retaining older workers hurts younger ones by reducing the number of jobs, and she co-authored a paper on the subject last year. Wu, with the Center for Retirement Research at Boston, challenges the co-called "lump labour" theory, which can be traced to Henry Mayhew's 1851 London Labour and the London Poor collection of research material. The Victorian-era social researcher and journalist argued that cutting the number of hours employees worked would reduce unemployment. 99% Invisible. Kowloon Walled City - Photos from Inside. Below are shots from ‘ City of Darkness: Life in Kowloon Walled City ‘ – a photobook by Greg Girard and Ian Lambot . The Canadian photographers spent 5 years shooting in the Kowloon Walled City before it was demolished in the early nineties… “33,000 people living in over 300 interconnected high-rise buildings, built without the contributions of a single architect, ungoverned by Hong Kong’s safety and health regulations, covering one square city block in a densely populated neighborhood near the end of the runway at Kai Tak airport.

In collaboration with Ian Lambot, I spent five years photographing and becoming familiar with the Walled City, its residents, and how it was organized. So seemingly compromised and anarchic on its surface, it actually worked -and to a large extent, worked well. The Walled City was torn down in 1992 but the photographs, oral histories, maps and essays in our book provide the most thorough record of daily life in a place that was a true Hong Kong original.” What Happens When Half The World Stops Making Babies. We are now in the middle of perhaps the greatest demographic change in recorded history. 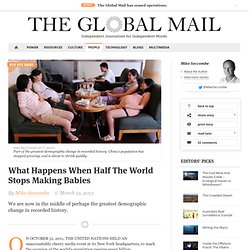 On October 31, 2011, the United Nations held an unaccountably cheery media event at its New York headquarters, to mark the occasion of the world’s population passing seven billion. It was a statistically questionable exercise, for it acknowledged that no one could be sure of the planet’s exact population on any given day. The UN called it “symbolic”. The question is why, if they were going to celebrate any major demographic development with such faux-certainty, did the powers that be at the UN not make it the really important one, the one which gives some hope for this overcrowded planet.

I mean this one: half the population of the world now lives in countries where those of childbearing age are having fewer than two children on average. China's New Bachelor Class - Jessica Levine. Gender imbalances in China have created a generation of men for whom finding love is no easy task. 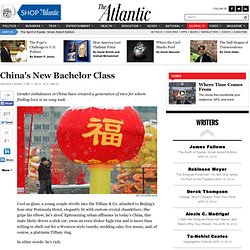