UNHCR - Welcome to Against All Odds 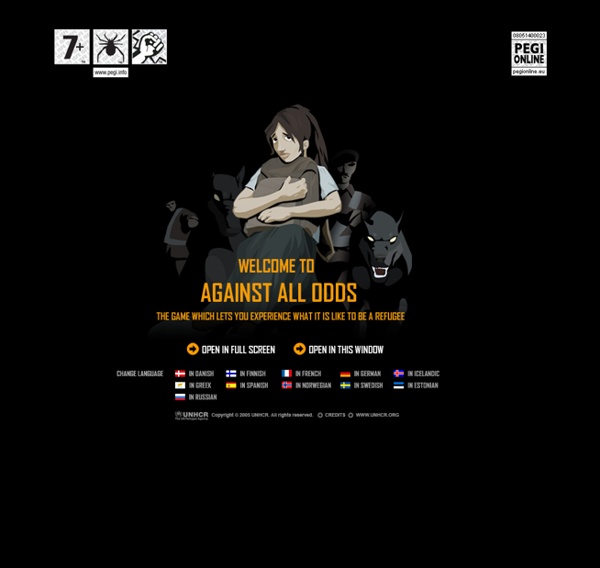 Shame On Europe Thousands of child refugees have arrived in Europe alone without any parents or relatives to look after them. Exhausted and terrified, many are in danger of being abused by criminals. We believe the government must offer 3,000 of them a safe home in Britain. Take action now if you agree. Go Back To Where You Came From I'm still fuming! Keep hitting the return button and getting bounced! OK, now I AM calm.... The "Moderator" of this assault on our intelligence obviously has social problems it appears. HOWEVER for anyone unemotionally looking at the increasing severity of the world's problems being driven primarily by the one point the "Moderator" kept closed by a stupid extreme-leftist remark about the lady's statement of Islam being the world's great problem IS THE PROBLEM. Not just for Australia, but the civilised world.

Should Prostitution Be a Crime? The abolitionists moved into the fight against global labor trafficking in the 1990s, focusing on sex trafficking, though most estimates suggest that the majority of trafficking victims are forced into domestic, agricultural or construction work. The abolitionists wanted to erase the traditional legal distinction between forced and consensual prostitution by cracking down on all of it as trafficking. In 1998, they tried to persuade President Bill Clinton — and Hillary Clinton, who was the honorary chairwoman of the Clinton administration’s council on women — to adopt their broad definition in an international crime treaty and a federal trafficking bill. It was a striking effort to expand and stiffen criminal punishment, a strategy Elizabeth Bernstein, a Barnard anthropologist who studies sex work and trafficking, termed “carceral feminism.”

World War One: How 250,000 Belgium refugees didn't leave a trace Image copyright Alan Taylor, Folkestone Historical Society The UK was home to 250,000 Belgian refugees during World War One, the largest single influx in the country's history. So why did they vanish with little trace? Little could have prepared Folkestone for 14 October 1914. Sea Prayer: a 360 story inspired by refugee Alan Kurdi This is a 360 film. Click to play then follow the story as the illustration is drawn. To commemorate the second anniversary of the death of Alan Kurdi, the three-year-old Syrian boy who drowned while attempting to reach Greece in 2015, the author Khaled Hosseini, a UNHCR goodwill ambassador , has written Sea Prayer. This imagined letter is written in the form of a monologue, delivered by a Syrian father to the son lying asleep in his lap, on the eve of their sea crossing to Europe. Hosseini is the author of The Kite Runner, A Thousand Splendid Suns and And the Mountains Echoed.

How People Learn to Become Resilient Norman Garmezy, a developmental psychologist and clinician at the University of Minnesota, met thousands of children in his four decades of research. But one boy in particular stuck with him. He was nine years old, with an alcoholic mother and an absent father. Each day, he would arrive at school with the exact same sandwich: two slices of bread with nothing in between. At home, there was no other food available, and no one to make any. Refugees - Cinema - History - Information - Lesson plans - Novels - Statistics - Videos - Vocabulary As Many as 50 Migrants Found Dead in a Truck in Austria - Text + Audio - 27 August 2015 (learningenglish.voanews.com) Migrant crisis: Grim find of bodies in Austria lorry - Article + Photos + Video - 27 August 2015 "The bodies of between 20 and 50 migrants have been found in a lorry abandoned in a motorway lay-by near the Austrian border with Hungary, authorities say." (BBC) Senegal migrant town Tambacounda mourns its lost sons - 27 August 2015 "People in one of Senegal's poorest areas are in mourning after dozens of their loved ones lost their lives in shipwrecks off the Libyan coast as they tried to make the treacherous journey to Europe. The BBC's Laeila Adjovi visited them."

Syria: what students need to know Thinking about how to discuss Syria with your students? Here are 4 key ideas that can help kids go beyond the latest headlines: 1. White Debt The word for debt in German also means guilt. A friend who used to live in Munich mentioned this to me recently. I took note because I’m newly in debt, quite a lot of it, from buying a house. Map: The walls Europe is building to keep people out After the Berlin Wall fell in 1989, for a while it seemed like border fences and barriers were a thing of the past in Europe. Many on the continent hoped for a new era of integration and receptivity. It didn't happen. Instead, various pressures have led Europe to adopt wall-building projects that would make Donald Trump proud. What does it mean to be a refugee? - Benedetta Berti and Evelien Borgman To learn more about global forced displacement, a good place to start is the website of the UN Refugee Agency (UNHCR). This includes plenty of information and resources; including a basic explanation of the Refugee Convention and an annual report on patterns of forced displacement. The website also looks at individual stories, trying to match the statistical data with more personal accounts of displacement. To further investigate the challenges faced by those who seek to begin a journey from war to safety, the missing migrants project looks broadly at those—both migrants and refugees—who have died along migratory routes (both at land and at sea).

When social workers helped to ban child marriage, suddenly girls had a future... You have to start with what the people want, what their concerns are and to bring everyone together, so they can realise their power to change things,” says social worker Jino Joy. These words were spoken in India, but they could have been said by a social worker anywhere in the world. World Social Work Day is a time to highlight the role of social workers in empowering people and facilitating social transformation from India to Iceland. Joy and his colleagues have supported a community in Bengaluru to set up a bank where residents pay a few rupees a week, which can be used to support families, for example, to deal with health problems or to provide funding when a promising business idea is presented.

In 1 tweet, J.K. Rowling captured the media's hypocrisy in how it treats Syrian refugees. J.K. Rowling is heartsick over how the thousands of Middle Eastern refugees flooding into Europe are being treated. So when The Daily Express published an article about the major humanitarian crisis on the bottom of their front page, Rowling took them to task. Specifically, for the prominent placement of a different story about a dog looking for a home. Of course, Rowling wasn't suggesting that people shouldn't care about homeless dogs.

Borderland: Mexico to the US Story 9 By Steve Inskeep We never planned to witness what we saw that day. We expected to see a stretch of the United States border fence in Hidalgo, Texas. In that location it’s more of a wall than a fence — a vertical concrete slab, topped by rusted steel posts. A local resident named Scott Nicol brought us to see it.