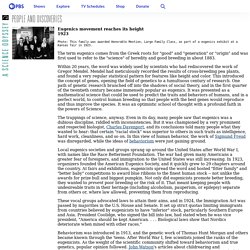 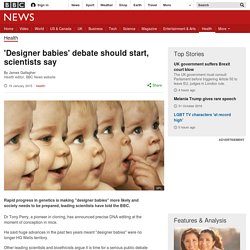 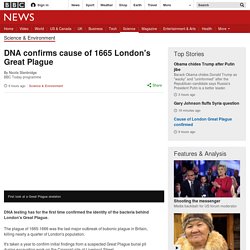 The plague of 1665-1666 was the last major outbreak of bubonic plague in Britain, killing nearly a quarter of London's population. America’s Hidden History: The Eugenics Movement. By Teryn Bouche and Laura Rivard The United States has an imperfect history. 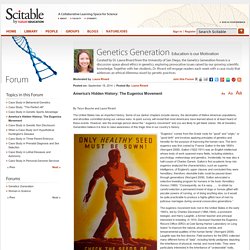 Some of our darker chapters include slavery, the decimation of Native American populations, and atrocities committed during our various wars. A quick survey will reveal that most Americans have learned about or at least heard of these events. Untitled. The white working class in the US has been decimated through an epidemic of ‘premature deaths’ – a bland term to cover-up the drop in life expectancy in this historically important demographic. 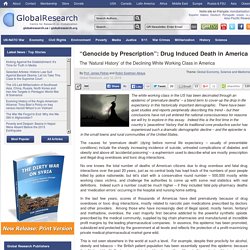 There have been quiet studies and reports peripherally describing this trend – but their conclusions have not yet entered the national consciousness for reasons we will try to explore in this essay. Indeed this is the first time in the country’s ‘peacetime’ history that its traditional core productive sector has experienced such a dramatic demographic decline – and the epicenter is in the small towns and rural communities of the United States. In the last few years, scores of thousands of Americas have died prematurely because of drug overdoses or toxic drug interactions, mostly related to narcotic pain medications prescribed by doctors and other providers. CBD Oils UK. Half of children resistant to the most common antibiotics. Studies have suggested that up to half of antibiotics in adults may fail due to superbugs. 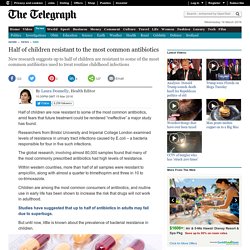 But until now, little is known about the prevalence of bacterial resistance in children. Treatments could be rendered ineffective, researchers warned Photo: Alamy Researchers reviewed 58 studies from 26 countries around the world involving 78,000 E.coli samples taken from children. Breakthrough cures will help us live longer, but at what price? Food security crisis will be felt globally by 2050, say experts. ABU DHABI // Environmentally sustainable farming will be key to tackling a 70 per cent increase in demand for food by 2050, according to the Minister of Climate Change and Environment. 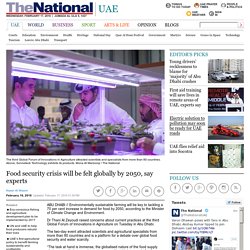 Dr Thani Al Zeyoudi raised concerns about current practices at the third Global Forum of Innovations in Agriculture on Tuesday in Abu Dhabi. The two-day event attracted scientists and agricultural specialists from more than 80 countries and is a platform for a debate over global food security and water scarcity. “The task at hand is immense, the globalised nature of the food supply chain means that no country, region or continent is immune to food insecurity,” Dr Al Zeyoudi said. He said although this phenomenon was a global challenge, it would first be felt in the Middle East where the arid climate posed particular problems when it came to feeding growing populations.

Others agreed. World War Three: Inside the War Room, BBC Two, review: 'gripping' What Happens When We All Live to 100? For millennia, if not for eons—anthropology continuously pushes backward the time of human origin—life expectancy was short. 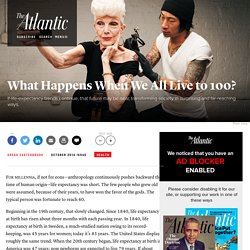 The few people who grew old were assumed, because of their years, to have won the favor of the gods. The typical person was fortunate to reach 40. Beginning in the 19th century, that slowly changed. Since 1840, life expectancy at birth has risen about three months with each passing year. In 1840, life expectancy at birth in Sweden, a much-studied nation owing to its record-keeping, was 45 years for women; today it’s 83 years. Global Research - Centre for Research on Globalization.

Interview: A Continent of Losers - trykkefrihed.dk. Maj 2007 - Lars Hedegaard - Authorised translation from the Danish by Sappho While the European populations are shrinking and the best-qualified young people are leaving, we continue to allow mass immigration of unqualified Muslims, who will soon make our welfare states collapse. 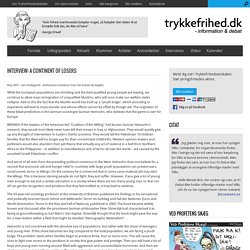 Add to this the fact that the Muslim world has built up a "youth bulge", which according to experience will lead to mass murder and whose effects cannot be offset by foreign aid. Whatever Happened to Sex. Western civilization is in collapse.

Every public and private institution in every western country, with the sole exception of Iceland, is corrupt. Government at every level is corrupt. The courts and judicial systems are corrupt. Justice is nonexistent. The financial systems are corrupt. Top 1 Percent Own More Than Half of World’s Wealth. A new report issued by the Swiss bank Credit Suisse finds that global wealth inequality continues to worsen and has reached a new milestone, with the top 1 percent owning more of the world’s assets than the bottom 99 percent combined. Of the estimated $250 trillion in global assets, the top 1 percent owned almost exactly 50 percent, while the bottom 50 percent of humanity owned collectively less than 1 percent. The richest 10 percent owned 87.7 percent of the world’s wealth, leaving 12.3 percent for the bottom 90 percent of the population.

The Credit Suisse report focused not on the top 1 percent, but on a slightly smaller group, the 0.7 percent of adults with assets of more than 1 million US dollars. This figure includes both financial assets and real assets, such as homes, small businesses and other physical property. Diseases and Vaccines — Timelines — History of Vaccines. Top 10 Worst Plagues In History. Health History is dotted with epidemics and plagues, but a certain number of them stand out as unique for their severity and impact on future generations.

British superbug outbreak 'could kill 80,000' David Cameron has warned that such a scenario would see the world “cast back into the dark ages of medicine”. The new figures are given in the National Risk Register of Civil Emergencies, a document compiled by the Cabinet Office that assesses the challenges posed by terrorism, disease, natural disasters and industrial strife. For the first time, it contains an assessment of the dangers posed by AMR, which it describes as a “particularly serious” issue for the UK. The document says: “Without effective antibiotics, even minor surgery and routine operations could become high-risk procedures, leading to increased duration of illness and ultimately premature mortality. Much of modern medicine, for example organ transplantation, bowel surgery and some cancer treatments may become unsafe due to the risk of infection.

We will be examining the extent to which epidemics have brought about social change, how they have affected politics, and where they have affected, or been affected by, the state. The lectures will consider the cultural impact of epidemics, in art and literature, and in religious belief. Developed world birth rates drop shows need for immigration. Population Change. Planetary habitability. Understanding planetary habitability is partly an extrapolation of the Earth's conditions, as this is the only planet currently known to support life. Planetary habitability is the measure of a planet's or a natural satellite's potential to develop and sustain life. Life may develop directly on a planet or satellite or be transferred to it from another body, a theoretical process known as panspermia.

As the existence of life beyond Earth is currently uncertain, planetary habitability is largely an extrapolation of conditions on Earth and the characteristics of the Sun and Solar System which appear favourable to life's flourishing—in particular those factors that have sustained complex, multicellular organisms and not just simpler, unicellular creatures. Research and theory in this regard is a component of planetary science and the emerging discipline of astrobiology. Suitable star systems[edit] Spectral class[edit] Britain will be home to 8 million foreigners for first time as migrant crisis continues to engulf Europe. Depopulation: One billion is enough! A One-World Government. ________________ By Benjamin Seiler In July 1969, the American President Nixon held a historic address before Congress.