Guest Post: What ELLs Taught Our School In A Week-Long Empathy Project. Editor’s Note: My talented colleague Pam Buric led an extraordinarily successful – on a number of levels – project at our school this month. 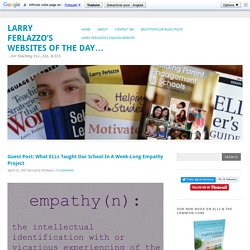 She agreed to write about it in this guest post. I’ve added a few comments and links that might be helpful if you’d like to do something similar at your school. Pam Buric has been teaching at Luther Burbank High School for 18 years and has teaching English learners for most of that time. In addition to teaching, she is the lead teacher of a small learning community and the multilingual coordinator for the school site. A few weeks ago, my EL students were given the opportunity to share their stories with the “mainstream” students at our school. 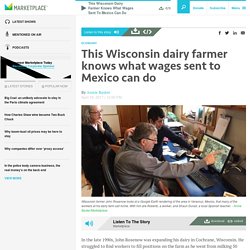 He struggled to find workers to fill positions on the farm as he went from milking 50 cows to more than 500. Gentrified Brooklyn Is Not My Brooklyn. Here’s What It’s Like To Be A Black Migrant In Mexico – we are mitú. Filmmaker Ebony Bailey’s documentary film “Life Between Borders: Black Migrants in Mexico” is a glimpse into the lives of black African and Caribbean migrants in Mexico. 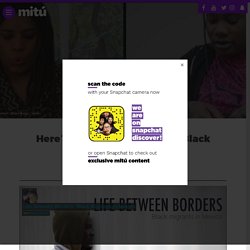 The film dives into the situation at the U.S. -Mexico border, where many Haitian migrants are “stuck” in Mexico following an order by former President Barack Obama. After the earthquake that devastated Haiti in 2010, many Haitians left the country to find work in countries such as Brazil. When the U.S. suspended deportations of Haitian nationals and granted them humanitarian visas to enter the country following the 2010 earthquake, many Haitians began traveling through Mexico to enter the U.S. But the order was eventually reversed, leaving thousands of Haitians who were traveling from Brazil to the U.S., effectively stranded in Mexico. Una Vida Dos Paises: Children and Youth (Back) in Mexico. As West Michigan's Hispanic population rises, so do opportunities - Crain's Detroit Business. History of Latinos in Michigan. Since the 20th century, Latinos have had a significant role in America's economy. 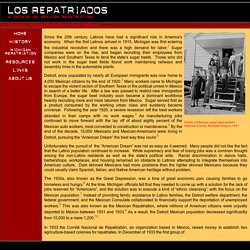 When the first Latinos arrived in 1915, Michigan was first entering the industrial revolution and there was a high demand for labor.1 Sugar companies were on the rise, and began recruiting their employees from Mexico and Southern Texas to tend the state's sugar beets. Those who did not work in the sugar beet fields found work maintaining railways and assembly lines in the automobile plants. Detroit, once populated by nearly all European immigrants was now home to 4,000 Mexican citizens by the end of 1920.2 Many workers came to Michigan to escape the violent racism of Southern Texas or the political unrest in Mexico in search of a better life.

After a law was passed to restrict new immigration from Europe, the sugar beet industry soon became a dominant workforce heavily recruiting more and more laborers from Mexico. Unfortunately the pursuit of the “American Dream” was not as easy as it seemed. Inmigracion-en-espanol-1. Many Spanish teachers have used La Misma Luna in class. 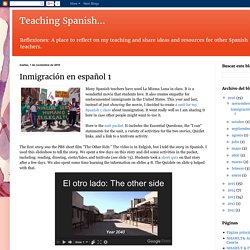 It is a wonderful movie that students love. It also creates empathy for undocumented immigrants in the United States. This Interactive Map Shows That Immigration Is NOT Just A Latino Thing. Surrendering. Reading and writing, like any other crafts, come to the mind slowly, in pieces. 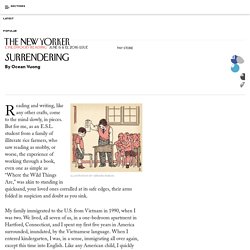 But for me, as an E.S.L. student from a family of illiterate rice farmers, who saw reading as snobby, or worse, the experience of working through a book, even one as simple as “Where the Wild Things Are,” was akin to standing in quicksand, your loved ones corralled at its safe edges, their arms folded in suspicion and doubt as you sink. My family immigrated to the U.S. from Vietnam in 1990, when I was two. We lived, all seven of us, in a one-bedroom apartment in Hartford, Connecticut, and I spent my first five years in America surrounded, inundated, by the Vietnamese language. When I entered kindergarten, I was, in a sense, immigrating all over again, except this time into English.

Like any American child, I quickly learned my ABCs, thanks to the age-old melody (one I still sing rapidly to myself when I forget whether “M” comes before “N”). New Study Shows Just How Much Undocumented Immigrants Actually Contribute. One of the main reasons that Donald Trump has been able to successfully catapult himself from reality television star to dominant Republican presidential frontrunner is his unrivaled ability to vilify undocumented immigrants. 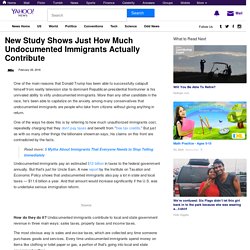 More than any other candidate in the race, he's been able to capitalize on the anxiety among many conservatives that undocumented immigrants are people who take from citizens without giving anything in return. One of the ways he does this is by referring to how much unauthorized immigrants cost, repeatedly charging that they don't pay taxes and benefit from "free tax credits. " But just as with so many other things the billionaire showman says, his claims on this front are contradicted by the facts. Read more: 5 Myths About Immigrants That Everyone Needs to Stop Telling Immediately Undocumented immigrants pay an estimated $12 billion in taxes to the federal government annually. How do they do it? The third stream of state and local revenue comes through income tax. Mis Clases Locas: Immigration Simulation. Spanish 3 is just starting a unit on immigration using the novel Esperanza by Carol Gaab. 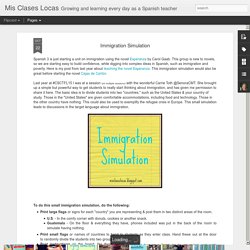