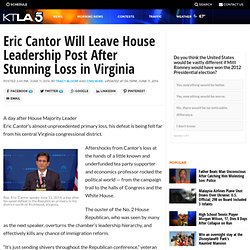 Rep. Eric Cantor speaks June 11, 2014, a day after his upset defeat in the Republican primary in his district north of Richmond, Virginia. Aftershocks from Cantor’s loss at the hands of a little known and underfunded tea party supporter and economics professor rocked the political world — from the campaign trail to the halls of Congress and the White House. The ouster of the No. 2 House Republican, who was seen by many as the next speaker, overturns the chamber’s leadership hierarchy, and effectively kills any chance of immigration reform. 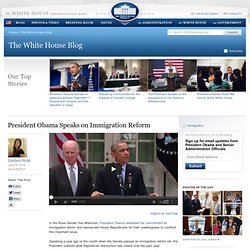 Rick Perry Blames President Obama for Refugee Crisis, But GOP House Won't Pass Immigration Reform. Beck who for his part rarely agrees with President Obama said America must "open our hearts" to these children who are "caught in political crossfire...through no fault of their own. 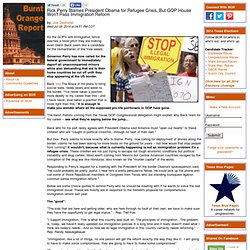 " But Gov. Perry seems to know exactly who to blame. Perry, now calling for deployment of drones along the border, claims he has been asking for more boots on the ground for years -- but how would that stop people from coming? It wouldn't, because what is currently happening is not an immigration problem it's a refugee crisis. These children are not just trying to escape not tough economic conditions but political instability and drug cartels. Sen. Jeff Sessions: Obama created border crisis. The crisis on our border is the direct and predictable result of President Obama's sustained effort to undermine America's immigration laws. 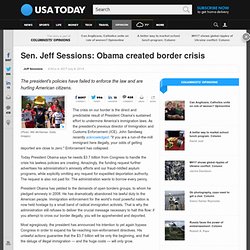 As the president's previous director of Immigration and Customs Enforcement (ICE), John Sandweg recently acknowledged: "if you are a run-of-the-mill immigrant here illegally, your odds of getting deported are close to zero. " Enforcement has collapsed. Today President Obama says he needs $3.7 billion from Congress to handle the crisis his lawless policies are creating. Amazingly, the funding request further advertises his administration's amnesty efforts and our fraud-riddled asylum programs, while explicitly omitting any request for expedited deportation authority. The request is also not paid for. President Obama has yielded to the demands of open borders groups, to whom he pledged amnesty in 2008.

And growing with it will be the crisis for the American worker. When did we forget that a nation owes its first allegiance to her own citizens? Sen. Gang of 8 Immigration Bill Hits a Legislative Sweet Spot. As recently as nine months ago, this week's bipartisan breakthrough was beyond imagining. 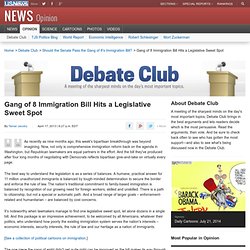 Now, not only is comprehensive immigration reform back on the agenda in Washington, but Republican lawmakers are equal partners in the effort. And the bill they've produced after four long months of negotiating with Democrats reflects bipartisan give-and-take on virtually every page. President Obama Speaks on Immigration Reform. The Daily Caller. Conservative columnist Pat Buchanan says the “Gang of Eight” immigration reform bill will, if passed, threaten national security and destroy the Republican Party’s ability to compete on a national level. 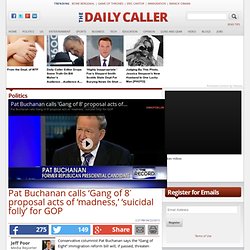 Buchanan, author of “Suicide of a Superpower: Will America Survive to 2025?” Told radio host Laura Ingraham on Monday that passing a “blanket pardon” of illegal immigrants would be “an act of madness,” particularly in the wake of last week’s terrorist attacks in Boston. “It’s been one week since something like 178 to 180 Americans — three of them murdered — but 178 injured, maimed and wounded by two individuals who were immigrants to this country who were asylum seekers and granted asylum and given benefits,” Buchanan said. 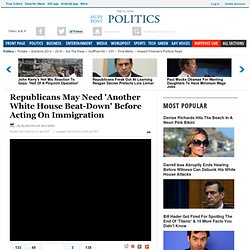 The policy most party leaders agree is best for the Republican Party's future is risky for most House Republicans seeking re-election in the fall. Almost all represent districts that are home to few minorities and they are in greater danger of losing to a primary challenger than to a Democrat in the general election. That leaves little incentive for the GOP-controlled House to even touch an immigration overhaul that would to grant citizenship to many of the 11 million people living in the country illegally.

Economics professor David Brat hammered Cantor, R-Va., for purportedly backing "amnesty" for people in the U.S. illegally during his primary challenge. He called his unexpected victory a wake-up call that "immigration reform is DOA. " "Pain can be a good teaching tool sometimes," said Mario H. Republican Party divided on immigration reform: Will the Senate proposal save or destroy the GOP? Photo by Chip Somodevilla/Getty Images On Tuesday, William Kristol, the editor of the Weekly Standard and Rich Lowry, the editor of the National Review, wrote a rare joint editorial denouncing the Senate's comprehensive immigration reform plan. 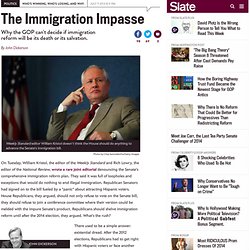 They said it was full of loopholes and exceptions that would do nothing to end illegal immigration. Republican Senators had signed on to the bill fueled by a "panic" about attracting Hispanic voters. House Republicans, they argued, should not only refuse to vote on the Senate bill, they should refuse to join a conference committee where their version could be melded with the impure Senate’s product.

Republicans should shelve immigration reform until after the 2014 election, they argued. There used to be a simple answer: existential dread. Since that time, the political theory has faced two sustained assaults. Marco Rubio: Gang of Eight’s immigration bill can’t pass the House - Seung Min Kim. Sen. 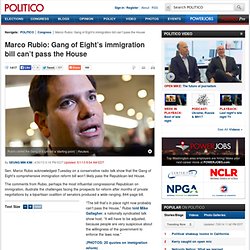 Senators to release immigration plan, including a path to citizenship. Millions of immigrants living illegally in the United States could earn a chance at citizenship under a sweeping Senate proposal to be released Tuesday that would represent the most ambitious overhaul of the nation’s immigration system in three decades. 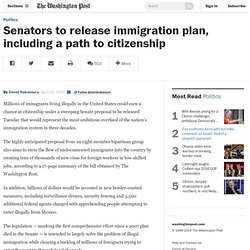 The highly anticipated proposal from an eight-member bipartisan group also aims to stem the flow of undocumented immigrants into the country by creating tens of thousands of new visas for foreign workers in low-skilled jobs, according to a 17-page summary of the bill obtained by The Washington Post. In addition, billions of dollars would be invested in new border-control measures, including surveillance drones, security fencing and 3,500 additional federal agents charged with apprehending people attempting to enter illegally from Mexico.