30,000 migrants a year get into Britain as spouse of EU citizens. White Britons could be in the minority by 2060's claims Oxford professor DAVID COLEMAN. Britain is poised at two historic turning points — and they go together. 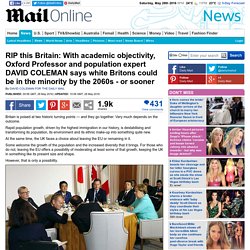 Very much depends on the outcome. Rapid population growth, driven by the highest immigration in our history, is destabilising and transforming its population, its environment and its ethnic make-up into something quite new. At the same time, the UK faces a choice about leaving the EU or remaining in it. Some welcome the growth of the population and the increased diversity that it brings. BBC's Last Whites Of The East End reveals effects of mass migration in Brtain. 'Everything this area stood for is being eradicated slowly but surely,’ says this proud, sad fifth generation East Ender. 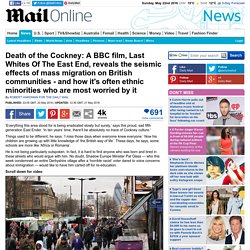 ‘In ten years’ time, there’ll be absolutely no trace of Cockney culture.’ Things used to be different, he says. ‘I miss those days when everyone knew everyone.’ Now his children are growing up with little knowledge of ‘the British way of life’. These days, he says, some schools are more like ‘Africa or Romania’. Ministers 'hiding full scale of EU immigration' Over the past five years 2.25 million EU nationals have registered for national insurance numbers but official migration figures suggest that just 1 million European citizens have come to this country. 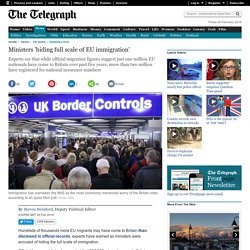 The latest official figures suggest that overall net migration levels, including non-EU migrants, have fallen slightly from record levels of 336,000 to 323,000. David Cameron said that the figures are "too high" and insisted that he can still hit his target of reducing net migration levels to "tens of thousands" with the help benefit curbs for foreign workers in his EU deal. Theresa May, the Home Secretary, said that net migration levels remain too high and warned that it is "putting pressure on our jobs, housing and out public services". However Eurosceptic Cabinet ministers Priti Patel and Iain Duncan Smith warned that Mr Cameron's deal will do nothing to reduce the levels of migration. 10k asylum seekers are missing and finding them is a 'drain on resources' Thousands of asylum seekers have dropped off the Government's radar and looking for them is considered by enforcement teams to be a 'drain on resources', the borders watchdog said today. 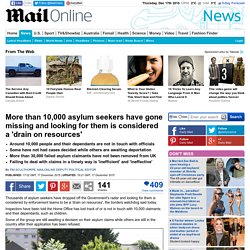 Inspectors have been told the Home Office has lost track of or is not in touch with 10,000 claimants and their dependants, such as children. Some of the group are still awaiting a decision on their asylum claims while others are still in the country after their application has been refused. David Cameron and Theresa May met Home Office Immigration Enforcement officers last year. The latest Government figures suggest some 30,000 failed asylum seekers are still in the UK. The government admits it has statistics on recent EU migration - and won't publish them. Immigration statistics sound like a dry subject - and they ought to be one. 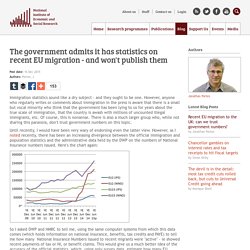 However, anyone who regularly writes or comments about immigration in the press is aware that there is a small but vocal minority who think that the government has been lying to us for years about the true scale of immigration, that the country is awash with millions of uncounted illegal immigrants, etc. Of course, this is nonsense. There is also a much larger group who, while not sharing this paranoia, don't trust government numbers on this topic.

Until recently, I would have been very wary of endorsing even the latter view. However, as I noted recently, there has been an increasing divergence between the official immigration and population statistics and the administrative data held by the DWP on the numbers of National Insurance numbers issued. HMRC refuses to release data which could may reveal EU migration levels. Statistics which could prove how many EU migrants actually enter Britain every year has been blocked by HMRC because it would be 'unhelpful' to the Prime Minister's renegotiation with the EU. 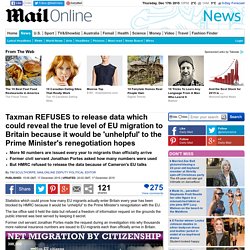 The tax office said it held the data but refused a freedom of information request on the grounds the public interest was best served by keeping it secret. Former civil servant Jonathan Portes made the request during an investigation into why thousands more national insurance numbers are issued to EU migrants each than officially arrive in Britain. If Denmark can treat foreigners differently, then so can Britain. Here we are – Denmark and Britain – both members of the European Union; indeed we joined at the same time. 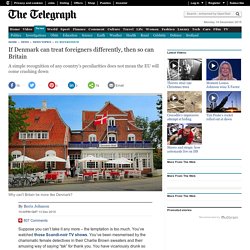 We both participate in what we are endlessly told is the great seamless unity of the single market. We are both supposedly communicants of that vast and inflexible euro-religion, which holds that every member state must commit itself body and soul to the four sacred freedoms – the cross-border movement of goods, people, services and capital; and we are assured by the pontifical authorities in Brussels – and by their high priests in the UK – that if there is any deviation from those principles, any violation, any variation, any genuflection to national peculiarity, no matter how trivial, the whole edifice of European law will come crashing down with devastating and unimaginable consequences. 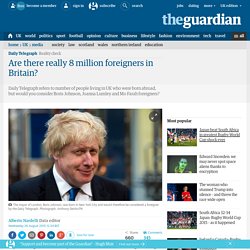 The 8 million figure refers to the number of people living in the UK who were not born in Britain. According to ONS data, the figure in 2013 was 7.9 million. Dorset immigration centre ordered to make food less British for illegal immigrants. Immigration centre in Dorset told to serve 'more culturally diverse' foodThree quarters of the immigrants at the centre complained about the foodThe centre houses 575 illegal immigrants as they await deportation By Ben Wilkinson for the Daily Mail Published: 22:37 GMT, 17 September 2015 | Updated: 06:58 GMT, 18 September 2015. 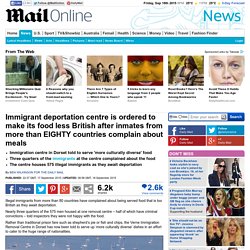 Illegal immigrants face six months in jail if they are caught driving in the UK. Ministers new laws will make it harder to remain in Britain illegallyNew offence driving while unlawfully in the UK to carry six months in jailLandlords will have to check the immigration status of all new tenantsPublic sector staff face checks to ensure they can speak English By Matt Chorley, Political Editor for MailOnline Published: 14:30 GMT, 17 September 2015 | Updated: 09:03 GMT, 18 September 2015. 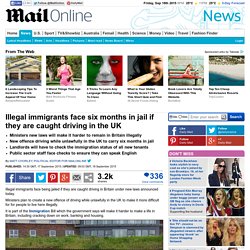 I’m sure she’s sincere and, even as I write, hubby Ed is decorating the spare bedroom and stocking the freezer in preparation for their new lodgers. The charities using YOUR money to sabotage all efforts to rein back migration. Charities are increasingly mounting attacks on Government policiesSome have even threatened to take the Government to court But the charities receive millions in taxpayer funding every year A Mail investigation has now discovered how the Left use these organisations to undermine the elected Government and its policies By Guy Adams for the Daily Mail Published: 23:47 GMT, 21 August 2015 | Updated: 08:19 GMT, 22 August 2015.

And Caribbean nations – the source of much of the UK’s immigration in the 1950s and 1960s – have dropped out of the top ten completely. Tony Blair’s decision to open the borders to Eastern Europe changed Britain. Britain took in more migrants than 17 other EU countries put together, new data shows. Spain, one of the more populous countries in the EU, with 46 million people, gave asylum to just 1,600 asylum applicants last year, and Poland – with a population of 38 million – took just 740. A boat carrying migrants, including men, women and children, off the coast of Libya in 2014 Photo: EPA Ireland took 495 while Portugal’s figure was 40, down from 135 the previous year. The figures highlighting how total asylum numbers are shared unequally across member states are expected to put Jean-Claude Juncker, the president of the European Commission, under pressure to devise a fairer system of distributing refugees. 'No consequences' if Cameron rejects EU migrant sharing plan. Quarter of eastern European workers 'pay just £1 a week in tax', says report.

“We constantly hear that immigrants work hard and pay their taxes. EU immigration surges by 43,000 in boost to Ukip. An estimated 122,000 people from those countries were working in the UK between January and March of this year, compared with 103,000 in the same period in 2013. Ukip may come first, according to polls published last night. Britain risks becoming dependent on cheap foreign workers, warns Yvette Cooper. ONS inspectors underestimated UK net migration by 350,000. Year after year official data played down scale of immigrationResearchers went to Heathrow, Gatwick and Manchester airportsBut influx from eastern Europe came through smaller, regional airports By Matt Chorley, Mailonline Political Editor Published: 13:55 GMT, 10 April 2014 | Updated: 14:05 GMT, 10 April 2014. Migrants add 5.8m to bulging Britain. Sir Andrew Green, chairman of Migration Watch UK, said the figures underlined the need to have a net migration target and stick to it.

More pupils speaking English as a second language. Brussels offers UK firms £1,000 cash 'bribes' to hire foreign workers. Business Minister Matthew Hancock said firms have a duty to hire BritonsSaid filling vacancies with well-trained foreign workers was an 'easy option'Employers receive up to £870 for every EU citizen from outside the UKFirms can recruit up to 20 foreign workers a year through the EU scheme By Jason Groves, Chief Political Correspondent. MARK HARPER: Racism? It is not racist to ask people who are here illegally to leave Britain. By MARK HARPER, IMMIGRATION MINISTER. MPs issue warning over immigrant numbers. Truth about the Romanian beggars of Park Lane. Number of EU immigrants to Britain during Labour years 'was underestimated by half a million'

Mass immigration & the EU. Immigration: The British public is close to despair. Are kissing cousins best for Britain? Tory curbs on benefits will deter Romanian migrants from coming to Britain. Up to 70,000 Romanian and Bulgarian migrants a year ¿will come to Britain¿ 600,000 migrants come here in one year - twice as many as go to France. Are ministers too scared to say what they know about the next wave of migrants?