Illegal Immigration and Employment in the U.S.

Worksite Enforcement. Strengthening Enforcement. “That’s why, over the past six years, deportations of criminals are up 80 percent. 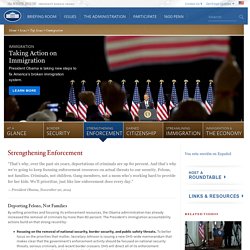 And that’s why we’re going to keep focusing enforcement resources on actual threats to our security. Felons, not families. Criminals, not children. 5 facts about illegal immigration in the U.S. The number of unauthorized immigrants in the U.S. has stabilized in recent years after decades of rapid growth. 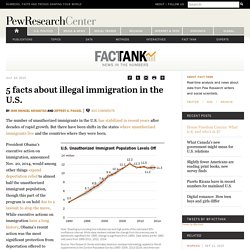 But there have been shifts in the states where unauthorized immigrants live and the countries where they were born. President Obama’s executive action on immigration, announced Nov. 20, 2014, would among other things expand deportation relief to almost half the unauthorized immigrant population, though this part of the program is on hold due to a lawsuit to stop the move. 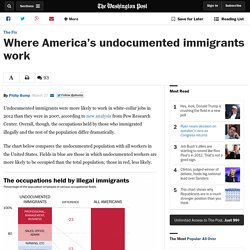 Overall, though, the occupations held by those who immigrated illegally and the rest of the population differ dramatically. The chart below compares the undocumented population with all workers in the United States. Fields in blue are those in which undocumented workers are more likely to be occupied than the total population; those in red, less likely. While the number of undocumented immigrants working in construction and production dropped 5 percentage points, 29 percent of the undocumented immigrant population still works in those fields. The percentage working in management and professional jobs increased from 10 to 13 percent over the five-year period.

The most common industry varied by state. Philip Bump writes about politics for The Fix. Report: Employers Facing ‘Little Risk’ Hiring Illegals, Enforcement Plummeted Since 2013. According to internal Immigration and Customs Enforcement (ICE) data obtained by CIS policy director Jessica Vaughan and contained in her new report, during the first five months of this fiscal year, ICE conducted 181 workplace audits and charged 27 employers with violations. 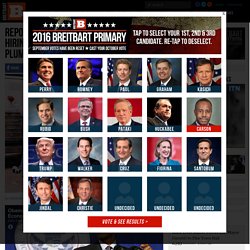 The figures represent a striking decline in enforcement from just a few years earlier, when in 2013 ICE conducted audits of more than 3,000 companies and arrested 179 employers, according to Vaughan. “The administration’s near discontinuation of worksite enforcement means that employers now face very little risk in hiring illegal workers and have little incentive to abide by the law,” the report reads. The report recalls how in 2009 the agency moved from a worksite enforcement effort that resulted in the arrests of illegal workers to a more audit-based enforcement approach focused on the employers. Additionally the employer fines ICE collects have seen a dramatic decline. Forbes Welcome.

Employers Who Unlawfully Hire Illegal Immigrants Probably Won't Get In Trouble, Report Finds. "The administration's near discontinuation of worksite enforcement means that employers now face very little risk in hiring illegal workers and have little incentive to abide by the law," wrote Jessica Vaughan, policy director for the Center for Immigration Studies. 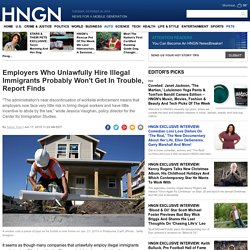 By Taylor Tyler | Jun 17, 2015 11:22 AM EDT A worker cuts a piece of pipe as he builds a new home on Jan. 21, 2015 in Petaluma, Calif. (Photo : Getty Images) It seems as though many companies that unlawfully employ illegal immigrants are being let off the hook by the Obama administration, as Immigration and Customs Enforcement (ICE) has conducted just a fraction of workplace audits compared to previous years. Fewer Businesses Targeted for Illegal Immigrant Hires Under Obama Policy. A new report claims U.S. 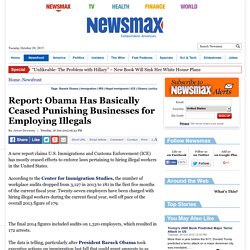 Immigrations and Customs Enforcement (ICE) has mostly ceased efforts to enforce laws pertaining to hiring illegal workers in the United States. According to the Center for Immigration Studies, the number of workplace audits dropped from 3,127 in 2013 to 181 in the first five months of the current fiscal year. Twenty-seven employers have been charged with hiring illegal workers during the current fiscal year, well off pace of the overall 2013 figure of 179.

Businesses to receive incentive for hiring illegal immigrants, report says. Does ACA Give Incentive to Hire Immigrants? Q: Did Obama’s executive actions on immigration include a $3,000 bonus to employers for each immigrant they hire instead of U.S. citizens? 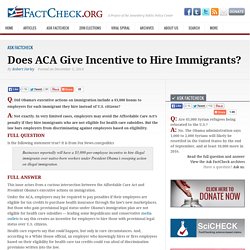 A: Not exactly. In very limited cases, employers may avoid the Affordable Care Act’s penalty if they hire immigrants who are not eligible for health care subsidies. But the law bars employers from discriminating against employees based on eligibility. Is the following statement true? It is from Fox News.com/politics. Obama amnesty extends to businesses that hire illegals. President Obama took office vowing to go after unscrupulous employers who hire illegal immigrants, but worksite audits have plunged over the last year and a half, according to a report released Tuesday by the Center for Immigration Studies, tumbling along with the rest of immigration enforcement. 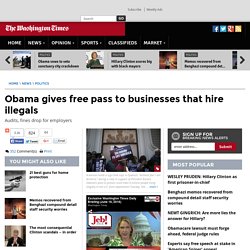 Fewer owners are being arrested, and fewer fines are being collected as well, according to the report, which suggests that even as he offers amnesty to millions of illegal immigrants, Mr. Obama is giving a similar free pass to ever more businesses who provide the jobs magnet that draws them. Through the first five months of this fiscal year, U.S. Immigration and Customs Enforcement conducted just 181 workplace audits and brought charges against only 27 employers, putting it on pace for fewer than 500 audits and just 65 arrests this year. 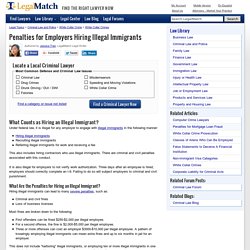 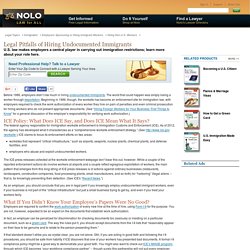 The worst that could happen was simply losing a worker through deportation. Beginning in 1986, though, the worksite has become an enforcement site for immigration law, with employers required to check the work authorization of every worker they hire on pain of penalties and even criminal prosecution for hiring workers who do not present appropriate documents. (See “Hiring Foreign Workers for Your Business: First Things to Know” for a general discussion of the employer’s responsibility for verifying work authorization.)

ICE Policy: What Does ICE Say, and Does ICE Mean What It Says? The federal agency responsible for immigration worksite enforcement is Immigration Customs and Enforcement (ICE). Worksites that represent “critical infrastructure,” such as airports, seaports, nuclear plants, chemical plants, and defense facilities, andemployers who abuse and exploit undocumented workers. Majority of undocumented immigrants work in low-skill jobs, report finds. Undocumented immigrants hold more white-collar jobs and fewer blue-collar jobs today than they did before the national recession of 2007-2009, but most remain concentrated in lower-skilled, low-paying jobs, “much more so than U.S.

-born workers,” according to a report released Thursday by the Pew Research Center in the District. The report, based on a five-year study from 2007 to 2012, found that the size of the illegal immigrant workforce has remained at 5.1 percent of all workers, even though the total number of illegal immigrants has fallen from a peak of 12.2 million in 2007 to about 11.2 million in 2012. Overall, it described an undocumented workforce that has stabilized during a period of economic recovery and has moved up in certain semi-skilled and professional occupations, but that has remained limited by language barriers, poor education and legal status and clustered in low-level occupations.

How to prevent businesses from hiring illegal immigrants. An American workplace. (Justin Lubin/AP) One point of agreement between President Obama and the Senate's Octogang is on "workplace enforcement. " They both want it! And even immigration rights advocates are keen on it. "The border security issue is, at this point, 90 to 95 percent solved," Frank Sharry, head of the pro-immigrant group America’s Voice, told Ezra yesterday.