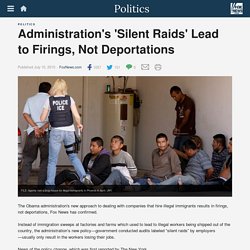 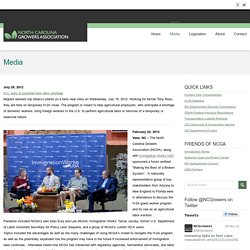 Working for farmer Tony Ross, they are here on temporary H-2A visas. The program is meant to help agricultural employers, who anticipate a shortage of domestic workers, bring foreign workers to the U.S. to perform agricultural labor or services of a temporary or seasonal nature February 24, 2012 Vass, NC – The North Carolina Growers Association (NCGA), along with Immigration Works USA sponsored a forum entitled “Making the Best of a Broken System”. 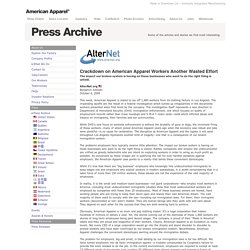 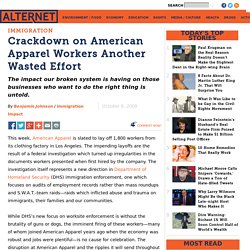 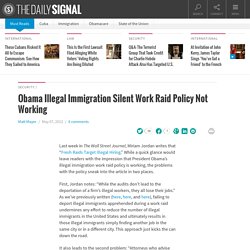 While a quick glance would leave readers with the impression that President Obama’s illegal immigration work raid policy is working, the problems with the policy sneak into the article in two places. Obama & Illegal Immigration. Why Immigrant Amnesty is the Best Solution to Border Security Issues - Border Security Issues and Immigrant Amnesty. It is clear that large-scale, long-term undocumented migration will pose a long-term threat to national security interests if left unchecked. 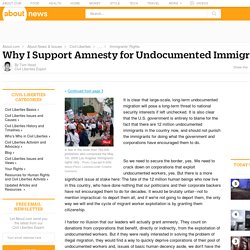 It is also clear that the U.S. government is entirely to blame for the fact that there are 12 million undocumented immigrants in the country now, and should not punish the immigrants for doing what the government and corporations have encouraged them to do. So we need to secure the border, yes. Rights of illegal immigrants protected in workplace - The Progress Report. Rights of ‘Illegal’ Immigrants Protected in Workplace Publisher’s note — if you cross a border, have you abandoned all your civil rights? 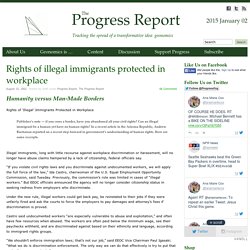 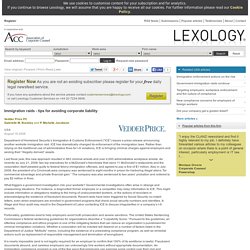 ICE has dramatically changed its enforcement of the immigration laws. Rather than relying on the traditional use of administrative fines for I-9 violations, ICE is bringing criminal charges against employers and seizing their “illegally derived” assets. Last fiscal year, this new approach resulted in 863 criminal arrests and over 4,000 administrative workplace arrests. Targeting employers: workplace enforcement and the culture of compliance. Promises and the Culture of Compliance As we all begin to move away from the new Administration’s honeymoon period, news of ongoing worksite investigations, criminal indictments and heavy-handed convictions of managers and executives is an indication that Immigration related compliance will continue to be a hot topic for the remainder of the President’s term. 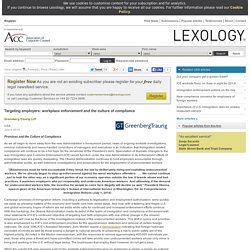 Speculation of dramatic changes to the way Immigration and Customs Enforcement (ICE) would function under the new Administration in its enforcement efforts of immigration laws are quickly dissipating. The Obama Administration continues to hold employers accountable through administrative audits, as well extensive investigations and prosecutions for the employment of undocumented workers.

“[B]usinesses must be held accountable if they break the law by deliberately hiring and exploiting undocumented workers. We’ve already begun to step up enforcement against the worst workplace offenders . . . . Immigration Reform Now! Early-stage, high-growth firms have been shown to create the bulk of new jobs in the United States. 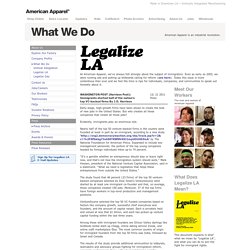 But who creates all those companies that create all those jobs? Evidently, immigrants play an enormous role. Nearly half of the top 50 venture-backed firms in the country were founded at least in part by an immigrant, according to a new study ' by The National Foundation for American Policy. Expanded to include key management personnel, the portion of the top young companies headed by foreign individuals hikes up to 74 percent. "It's a gamble whether an entrepreneur should stay or leave right now, and that's not how the immigration system should work," Mark Heesen, president of the National Venture Capital Association, said in a statement. The study found that 46 percent (23 firms) of the top 50 venture-backed companies selected by Dow Jones's Venturesource were started by at least one immigrant co-founder and that, on average, those companies created 150 jobs.