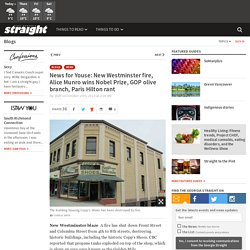 CBC reported that propane tanks exploded on top of the shop, which is along an area once known as the Golden Mile. Alice Munro wins Nobel Prize Canadian short-story writer Alice Munro has become the 13th woman to win the Nobel Prize in Literature. Bookies had previously put Munro second in the running behind Japan's Haruki Murakami. Fraser Health defends decision The president and CEO of Fraser Health, Dr. Vancouver city staff want court injunction to deal with non-compliant landlord. VANCOUVER -- City staff are recommending Vancouver city council seek a legal injunction from the B.C. 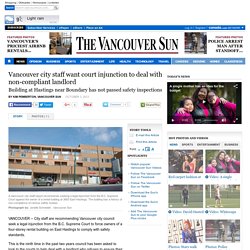 Supreme Court to force owners of a four-storey rental building on East Hastings to comply with safety standards. This is the ninth time in the past two years council has been asked to look to the courts to help deal with a landlord who refuses to ensure their building is up to code. The 60-unit mixed use building, located at 3683 East Hastings near Boundary Road, has a history of not complying with various safety bylaws. Although its residential units had been vacant since a fire in 2005, a city inspector discovered in May that 60 tenants had moved into the building without the owner completing safety inspections. University proponents host open house. Bed bug infestation being investigated.

Francesco Aquilini and His Canucks Breakaway. To truly grasp the wonderful improbability of the Aquilini family taking possession of Vancouver’s crown jewel – its NHL Canucks – you have to go for a ride. 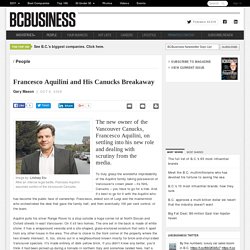 And it’s best to go for it with the Aquilini who has become the public face of ownership: Francesco, eldest son of Luigi and the mastermind who orchestrated the deal that gave the family half, and then eventually 100 per cent control, of the team. Aquilini pulls his silver Range Rover to a stop outside a huge corner lot at North Slocan and Oxford streets in east Vancouver. The Province: Vancouver poised to take building owners to court.

A Friday deadline has been set by the City of Vancouver for the owners of a troubled building on East Hastings Street to complete repairs to bring the rental complex into compliance with all bylaws. 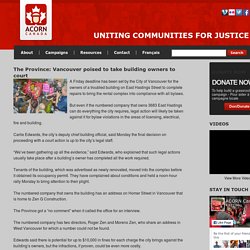 But even if the numbered company that owns 3683 East Hastings can do everything the city requires, legal action will likely be taken against it for bylaw violations in the areas of licensing, electrical, fire and building. Carlie Edwards, the city’s deputy chief building official, said Monday the final decision on proceeding with a court action is up to the city’s legal staff. Rags-to-riches tales started in Italy and India. Luigi Aquilini's half-century in Canada embodies the rags-to-riches dream that has been --and remains -- a target for generations of immigrants. 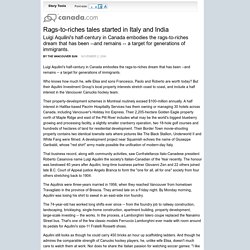 Who knows how much he, wife Elisa and sons Francesco, Paolo and Roberto are worth today? But their Aquilini Investment Group's local property interests stretch coast to coast, and include a half interest in the Vancouver Canucks hockey team. Their property-development schemes in Montreal routinely exceed $100-million annually. A half interest in Halifax-based Pacrim Hospitality Services has them owning or managing 30 hotels across Canada, including Vancouver's Holiday Inn Express. Metro News Vancouver: Furious tenants rally outside problem apartments. In a heated rally, residents of an East Hastings apartment block protested outside their building Monday to bring attention to the insidious, unsafe conditions inside. 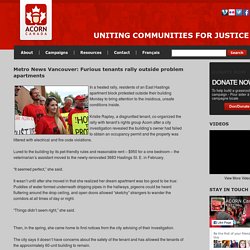 Kristie Rapley, a disgruntled tenant, co-organized the rally with tenant’s rights group Acorn after a city investigation revealed the building’s owner had failed to obtain an occupancy permit and the property was littered with electrical and fire code violations. Lured to the building by its pet-friendly rules and reasonable rent – $950 for a one bedroom – the veterinarian’s assistant moved to the newly-renovated 3683 Hastings St. E. in February. “It seemed perfect,” she said. It wasn’t until after she moved in that she realized her dream apartment was too good to be true: Puddles of water formed underneath dripping pipes in the hallways, pigeons could be heard fluttering around the drop ceiling, and open doors allowed “sketchy” strangers to wander the corridors at all times of day or night.

Bed Bug Report for 801 E 6th Ave, Vancouver, BC. Frustrated on 11/12/2015 I moved in 2010,big mistake the carpets weren't even cleaned,because I was homeless I wanted a roof over my head,had no problems with bed bugs but roaches mice rats on my balcony since we lived on the roof,and having raccoons trying to get in my place to get to my cat,in 2012 bed bugs,bed bugs galore ,couldn't take it so moved to another suite,bed bug problem again and mice living in the heating vent,maintenance came to if up the hole and 6 mice ran all over ewwww so I moved again same thing roa. 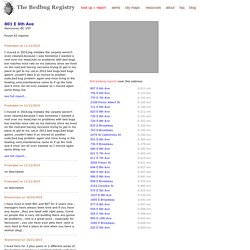 Bed Bug Report for 807 E 6th Ave, Vancouver, BC. This is the sister building to 801 E 6th with same owner and sam manager, I have been a resident for 4 years , My current situation , mould and leaking bathroom ceiling ask for repairs more than 5 times over 3 years . 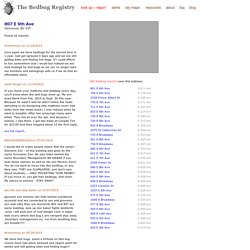 Under kitchen sink .mould the cold water is no longer functioning and the hot water is so hot it is dangerous ,I small child would scalded by such heat. missing drywall and constant water leak , This unti as painted by previous tenant ,when I rented I asked to have the unit returne d to standard apt colours As I say it is more than 4 years no paint . Lighting , requested main lights be repaired , using a bed lamp .