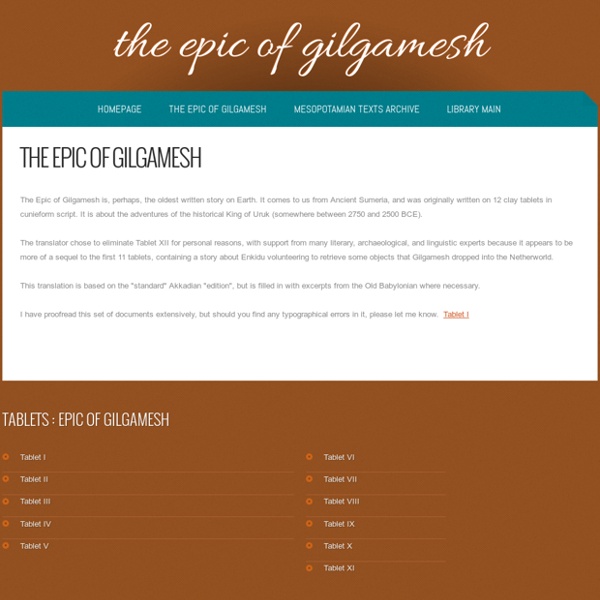 The Epic of Gilgamesh is, perhaps, the oldest written story on Earth. It comes to us from Ancient Sumeria, and was originally written on 12 clay tablets in cunieform script. It is about the adventures of the historical King of Uruk (somewhere between 2750 and 2500 BCE). The translator chose to eliminate Tablet XII for personal reasons, with support from many literary, archaeological, and linguistic experts because it appears to be more of a sequel to the first 11 tablets, containing a story about Enkidu volunteering to retrieve some objects that Gilgamesh dropped into the Netherworld. This translation is based on the "standard" Akkadian "edition", but is filled in with excerpts from the Old Babylonian where necessary. I have proofread this set of documents extensively, but should you find any typographical errors in it, please let me know.

Lost city 'could rewrite history' By BBC News Online's Tom Housden The remains of what has been described as a huge lost city may force historians and archaeologists to radically reconsider their view of ancient human history. Marine scientists say archaeological remains discovered 36 metres (120 feet) underwater in the Gulf of Cambay off the western coast of India could be over 9,000 years old.

There Were Giants Upon the Earth The following is excerpted from There Were Giants Upon the Earth: Gods, Demigods, and Human Ancestry: The Evidence of Alien DNA, available from Bear and Company. If you would like to learn more about this book or buy a copy, please do so here. Introduction Irish Fairy Tales: Mongan's Frenzy Sacred Texts Sagas and Legends Celtic Index Previous The abbot of the Monastery of Moville sent word to the story-tellers of Ireland that when they were in his neighbourhood they should call at the monastery, for he wished to collect and write down the stories which were in danger of being forgotten. "These things also must he told," said he. In particular he wished to gather tales which told of the deeds that had been done before the Gospel came to Ireland. "For," said he, "there are very good tales among those ones, and it would be a pity if the people who come after us should be ignorant of what happened long ago, and of the deeds of their fathers." So, whenever a story-teller chanced in that neighbourhood he was directed to the monastery, and there he received a welcome and his fill of all that is good for man.

Ancient underwater cities being found that are 10,000 years old Lost city 'could rewrite history' By BBC News Online's Tom Housden The remains of what has been described as a huge lost city may force historians and archaeologists to radically reconsider their view of ancient human history. Marine scientists say archaeological remains discovered 36 meters (120 feet) underwater in the Gulf of Cambay off the western coast of India could be over 9,000 years old.

Sumerian Gods and Goddesses Sumerian Gods Is Anu holding the symbolic Holy Grail of a Bloodline he created? British Museum Nephilim, Anunnaki - Royal Bloodline - Creators "Those who from Heaven to Earth came" The Sumerian King List allegedly recorded all the rulers of Earth over 400,000 years who were said to be gods, demigods, or immortals ... or one soul playing all the roles. In Sumerian Mythology the Anunnaki were a pantheon of good and evil gods and goddesses (duality) who came to Earth to create the human race.

Epic of Gilgamesh The Epic of Gilgamesh, an epic poem from Mesopotamia, is considered the world's first truly great work of literature. The literary history of Gilgamesh begins with five Sumerian poems about 'Bilgamesh' (Sumerian for 'Gilgamesh'), king of Uruk. These independent stories were used as source material for a combined epic. The first surviving version of this combined epic, known as the "Old Babylonian" version, dates to the 18th century BC and is titled after its incipit, Shūtur eli sharrī ("Surpassing All Other Kings"). Only a few tablets of it have survived.

Theories about the Lost City of Atlantis If you like this story feel free to share... Ever since the famed Greek philosopher Plato first wrote of a fabled continent called Atlantis more than two thousand years ago, scholars have been locked in fierce debate as to whether such a place truly existed. While a few rare individuals have taken Plato’s words seriously, most scoff at the idea that an advanced civilization could vanish as completely as if it had never existed.

Mallie and the Trow - Scotland's Stories In the Shetland Isles the trows are strange and magical creatures. They’re capable of great kindness and also great mischief. Mallie, a young mother, had four wee bairns to feed and a husband lost at sea. She had reached rock bottom and needed help but no-one would help her. Then, as the night drew in, there was a knock at the door. It was a little man dressed in grey with a little grey hat on top of his head. Legendary Diamonds from History If you like this story feel free to share... 10.Tiffany Yellow Diamond The Tiffany Yellow Diamond is one of the largest yellow diamonds ever discovered; it weighed 287.42 carats in the rough when discovered in 1878 in the Kimberley mine in South Africa. Good Structures for Balsa Wood Towers Balsa wood is only the third lightest wood in the world, but it is strong. Engineering students build balsa wood towers (or bass wood towers) to learn how to build strong structures. It is an excellent exercise, and students learn a lot doing it.

Ancient Tunisia - The Ancient Punic and Carthaginian Empires Early Carthage A statue found at Carthage, possibly of Dionysus or Apollo, deities imported from Greek colonists While the culture and commercial genius of the cities of Phoenicia enabled them to preserve their independence through many centuries, in a sort of scornful supremacy over earth's military conquerors, they never themselves attained, nor did they seem to aspire to, the physical dominion over the world. The Roman Army Knife The world's first Swiss Army knife' has been discovered and it was made by the ancient Romans around 200 AD. The Roman Army knife is made of silver and has an iron blade. It also has a spoon, fork as well as a retractable spike, spatula and small tooth-pick. Experts believe that the knife was stored in a grave for over a thousand years.