How to Promote Your Blog With Social Media 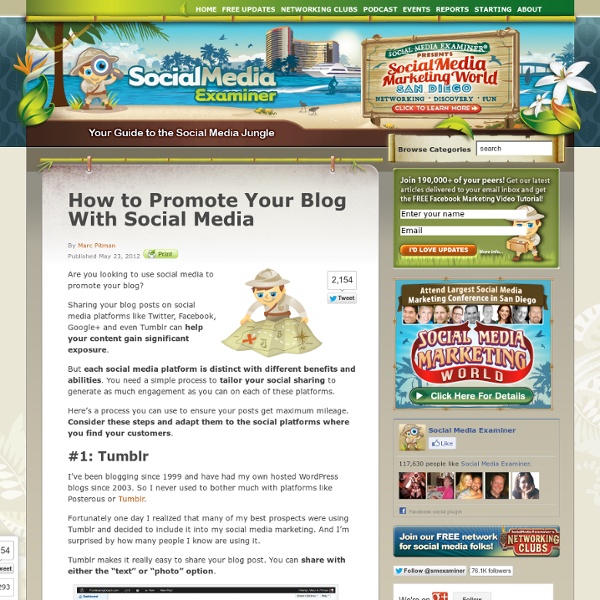 Are you looking to use social media to promote your blog? Sharing your blog posts on social media platforms like Twitter, Facebook, Google+ and even Tumblr can help your content gain significant exposure. But each social media platform is distinct with different benefits and abilities. You need a simple process to tailor your social sharing to generate as much engagement as you can on each of these platforms. Here’s a process you can use to ensure your posts get maximum mileage. #1: Tumblr I’ve been blogging since 1999 and have had my own hosted WordPress blogs since 2003. Fortunately one day I realized that many of my best prospects were using Tumblr and decided to include it into my social media marketing. Tumblr makes it really easy to share your blog post. The HTML code is all ready to use, so I copy it just before publishing the blog post. Here’s how to share with the “text” option. Tumblr offers lots of ways to easily share information. Sharing a post as text is as easy as 1-2-3. Voila! Related:  Vancouver, BC

That Was Fast: Criminals Exploit LinkedIn Breach For Phishing Attacks Google Sued in Brazil, Lawyers Answer with Risotto Recipe Google’s lawyers accidentally included a risotto recipe in an appeal submitted to Brazil’s Superior Court of Justice (STJ), the Brazilian website G1 reports. Here’s the offending document as published by G1: We checked for ourselves, and can confirm it happened, as proven by an official authorization to withdraw the page that contains “a risotto recipe” from the filing, “since it doesn’t belong and is not related to the present process.” Fun apart, this story is a good example of the legal risks Google incurs in Brazil. As we reported, the Brazilian Federal Attorney’s Office filed a lawsuit against Twitter for hosting accounts that warn of traffic controls, while a local judge heavily fined Google’s subsidiary a few months ago when it refused to reveal the identities of three bloggers.

T-Shirt of the Day: Space Invaders Flag We may not be experts in the field of fashion, but we know an awesome t-shirt when we see one, and with the power of the Internet they're easy to find. But we've decided to make it even easier by partnering with some of the biggest brands and posting one exceptionally full-of-win t-shirt a day, every day, 'til the end of time. Or until we get bored. Whichever comes first. Like it? Space Invaders Flag Price: $14 (discounted!) On Our Last Episode Starman Original by TeeRaiders.com Reading Women's Emotions and Facial Expressions | Men's Health Researchers in Germany recently concluded that men suck at reading women's emotions. Prove 'em wrong. Here is what these faces are saying. Next » This expression says... You're losing her! Shift The Focus Stop yammering. This expression says... Intoxicated by love (or infatuation), she'll smile wide enough to make her cheeks pucker up, put crescent-shaped curves on her lower eyelids, and etch smile lines into the corners of her eyes. Keep It Going Reinforce it: "I love seeing you so happy." This expression says... She's rubbing her neck to calm herself. Play Parrot You totally screwed up. This expression says... By rubbing her temples and furrowing her brow, she could be signaling her doubts about your relationship. Let Her Talk For women, dialogue is about bonding, says Dr. This expression says... Looks like she's ready for action—dilated pupils are a trademark of arousal (that is, unless you dimmed the lights). Build The Tension Hold up, Pepe Le Pew. This expression says...

Program Updates – Vancouver International Film Festival One Of The Largest Film Festivals in North America This fall, the 33rd annual Vancouver International Film Festival welcomes some of the world's finest films to one of the most beautiful cities on the planet. For 16 days, almost 365 films from over 70 countries will play on nine screens. In addition to entertaining and essential viewing for film lovers, VIFF also provides invaluable resources for media professionals with VIFF Industry's development sessions, one-on-one meetings and networking receptions. free-programming-books/free-programming-books.md at master · vhf/free-programming-books Green Tea Press: Free Computer Science Books JSON to JSONP: Bypass Same-Origin Policy Download source code - 39.3 KB Introduction In my last article (Prepare a JSON Web Service and access it with JQuery), I had explained JSON, how to return JSON data from a Web Service, and how to use a JSON-enabled Web Service with JQuery. In this article, I will explain how JavaScript Object Notation with Padding (JSONP), an extended concept from JSON, can be used to solve cross domain issues. What and why JSONP? AJAX is a key technology in web 2.0 that is being used widely in web sites. Same-Origin Policy Same-origin policy is a concept in browser-side programming languages (such as JavaScript) which allows accessing resources in the same site (same domain) but preventing accessing resources in different domains. Use a Proxy Web Service As XMLHttpRequest (in AJAX) doesn’t allow cross domain calls, the common approach is to use a proxy Web Service to access third party data. Figure 1: Using a proxy Web Service to access data from a different domain Use IFrame How JSONP works? References

Send json HTTP post with bash Designing Better JavaScript APIs Advertisement At some point or another, you will find yourself writing JavaScript code that exceeds the couple of lines from a jQuery plugin. Your code will do a whole lot of things; it will (ideally) be used by many people who will approach your code differently. This article covers the most important things that you will need to consider before and while writing your own utilities and libraries. Peter Drucker once said: “The computer is a moron.” Table of Contents Fluent Interface The Fluent Interface1 is often referred to as Method Chaining (although that’s only half the truth). Aside from major simplifications, jQuery offered to even out severe browser differences. Method Chaining The general idea of Method Chaining6 is to achieve code that is as fluently readable as possible and thus quicker to understand. var elem = document.getElementById("foobar"); elem.style.background = "red"; elem.style.color = "green"; elem.addEventListener('click', function(event) { alert("hello world!")

Deep Habits: The Importance of Planning Every Minute of Your Work Day December 21st, 2013 · 153 comments Time Blocking The image above shows my plan for a random Wednesday earlier this month. My plan was captured on a single sheet of 24 pound paper in a Black n’ Red twin wire notebook. Notice that I leave some extra room next to my time blocks. I call this planning method time blocking. This type of planning, to me, is like a chess game, with blocks of work getting spread and sorted in such a way that projects big and small all seem to click into completion with (just enough) time to spare. Three Concerns Sometimes people ask why I bother with such a detailed level of planning. Sometimes people ask how time blocking can work for reactive work, where you cannot tell in advance what obligations will enter your life on a given day. (Another smart strategy in this context is to give open-ended reactive blocks secondary purposes: e.g., “process client requests; if I have downtime during this block, work on project X.”) Conclusion

How To Stop Being Lazy And Get More Done - 5 Expert Tips Before we commence with the festivities, I wanted to thank everyone for helping my first book become a Wall Street Journal bestseller. To check it out, click here. Some days the to-do list seems bottomless. Just looking at it is exhausting. We all want to know how to stop being lazy and get more done. I certainly want the answer. So I decided to call a friend who manages to do this — and more. Cal Newport impresses the heck out of me. He has a full-time job as a professor at Georgetown University, teaching classes and meeting with students.He writes 6 (or more) peer-reviewed academic journal papers per year.He’s the author of 4 books including the wonderful “So Good They Can’t Ignore You.” And yet he finishes work at 5:30PM every day and rarely works weekends. No, he does not have superpowers or a staff of 15. Below you’ll get Cal’s secrets on how you can better manage your time, stop being lazy, get more done — and be finished by 5:30. 1) To-Do Lists Are Evil. Here’s Cal: And he’s right.