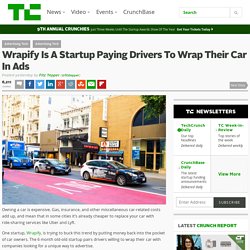 Gas, insurance, and other miscellaneous car-related costs add up, and mean that in some cities it’s already cheaper to replace your car with ride-sharing services like Uber and Lyft. One startup, Wrapify, is trying to buck this trend by putting money back into the pocket of car owners. The 6 month old-old startup pairs drivers willing to wrap their car with companies looking for a unique way to advertise. Here’s how it works: Car Buying Platform Carwow Raises £12.5M Series B Led by Accel. The better way to buy a new car. Betterdriver. BetterDriver.Club Wants To Make You A Better Driver — And Help You Win Money. We saw a couple of car hacks during our Disrupt SF Hackathon today. 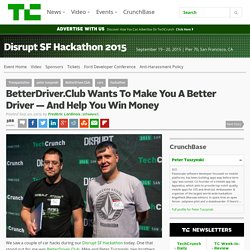 One that stood out for me was BetterDriver.Club. Mike and Peter Tuszynski, two brothers who flew in from Poland to participate in the event, had originally planned to build a healthcare app. But after seeing the $149 Vinli OBD-II plug, which combines an LTE hotspot with the ability to read data from a cars’ sensors, they decided to build an iOS app for drivers instead. gallery1 gallery2 gallery3 “We wanted to so something good – not just another stupid crazy app — but something hopefully useful,” Peter told me.

Like some already existing tools, BetterDriver.Club looks at your driving data like fuel economy and the number of rapid accelerations and stops. That’s interesting, but the app then puts a twist on this and gamifies the experience by allowing you to compete with your friends — and maybe win some money if you’re driving well. GoCarShare - Car Sharing Made Fun. Find your next car, van or truck - CarSort. Automotive Websites, SEO, Advertising, CRM. Car Sharing, an alternative to car rental and car ownership – Zipcar. Never overpay. Hassle-free car buying from TrueCar Certified Dealers. Luxury Car-Sharing Service HiGear Launches “Swap Club,” Allowing Vehicle Owners To Trade Cars.

Luxury car-sharing service HiGear is announcing a new product called “Swap Club,” which will allow its existing car owners the opportunity to swap cars among each other in exchange for HiGear points. 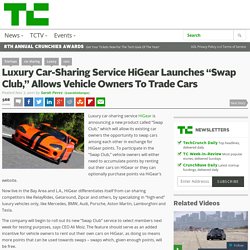 To participate in the “Swap Club,” vehicle owners will either need to accumulate points by renting out their cars on HiGear or they can optionally purchase points via HiGear’s website. Car Sharing, an alternative to car rental and car ownership – Zipcar. Cheap Car Rentals - Rent Car from Your Local Car Hire Companies. Why you'll love renting cars on RentMama.com Car Rental? 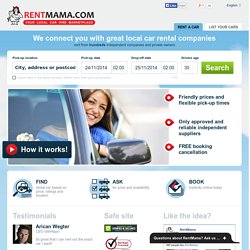 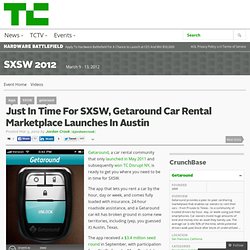 The app that lets you rent a car by the hour, day or week, and comes fully loaded with insurance, 24-hour roadside assistance, and a Getaround car-kit has broken ground in some new territories, including (yep, you guessed it) Austin, Texas. The app received a $3.4 million seed round in September, with participation from Netflix founder Marc Randolph, Powerset founder Barney Pell, WordPress’ Matt Mullenweg, Redpoint Ventures, General Catalyst, Michael Arrington‘s Crunchfund and others. At that point Getaround was only available in the Bay Area, but has since gone on to disrupt the Portland area and San Diego. You see, Getaround isn’t rushing the service into any market without being sure that there’s enough demand, variety and inventory. Luckily for all of you venturing out to SXSW this week, Getaround will be ready for you. 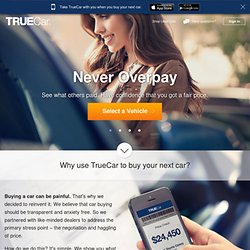 That's why we decided to reinvent it. We believe that car buying should be transparent and anxiety free. So we partnered with like-minded dealers to address the primary stress point – the negotiation and haggling of price.How do we do this? It's simple. We show you what others paid for the car you are considering. "The TrueCar Certified Dealer was wonderful to go to because they didn't pressure us and we got in and got out with a car that we both loved. " Compare Cars by Price, Specs, & Reviews. Getable. AdverCar. Auto Advertising Startup adverCar Raises $2M From Canaan Partners, 1-800-Flowers, And Others. AdverCar, a startup promising to make it easy for drivers to turn their vehicles into rolling advertisements, has raised a $2 million seed round. 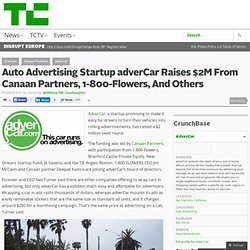 The funding was led by Canaan Partners, with participation from 1-800-Flowers, Branford Castle Private Equity, New Orleans Startup Fund, Jit Saxena, and the TiE Angels Boston. 1-800-FLOWERS CEO Jim McCann and Canaan partner Deepak Kamra are joining adverCar’s board of directors. Founder and CEO Neil Turner said there are other companies offering to wrap cars in advertising, but only adverCar has a solution that’s easy and affordable for advertisers. Wrapping a car in ads costs thousands of dollars, whereas adverCar mounts its ads as easily removable stickers that are the same size as standard ad units, and it charges around $280 for a monthlong campaign.

Car Hire, Best Rental Prices Guaranteed! - rentalcars.com. Car Rental: Find Cheap Rental Cars & Rent a Car Deals. Car Rental in Dallas/Ft. Worth, Austin and San Francisco - Rent an Audi A4 at DFW, DAL, AUS, SFO, or LAX. Airport Car Rental Startup Silvercar Ramps Up Expansion, With Plans For 7 Cities By Year-End. Airport car rental startup Silvercar has increased the number of markets it hopes to launch in by the end of the year, as it seeks to more aggressively make its services available to more potential customers. 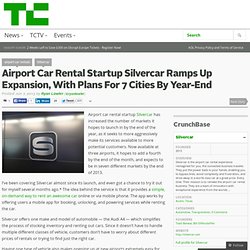 Now available at three airports, it hopes to add a fourth by the end of the month, and expects to be in seven different markets by the end of 2013. I’ve been covering Silvercar almost since its launch, and even got a chance to try it out for myself several months ago.* The idea behind the service is that it provides a simple, on-demand way to rent an awesome car online or via mobile phone. The app works by offering users a mobile app for booking, unlocking, and powering services while renting the car. Silvercar offers one make and model of automobile — the Audi A4 — which simplifies the process of stocking inventory and renting out cars.

Having one type of vehicle also makes opening up at new airports extremely easy for the startup. - Sidecar.