Hatshepsut was a female pharaoh during the New Kingdom in Egypt. Twenty years after her death, somebody smashed her statues, took a chisel and atte… Queen Hatshepsut. The accomplishments of Queen Hatshepsut are many, but perhaps the greatest of all was her ability to rule Egypt during the 18th Dynasty. 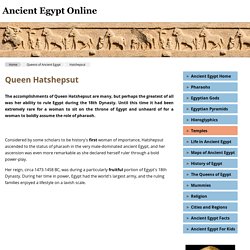 Until this time it had been extremely rare for a woman to sit on the throne of Egypt and unheard of for a woman to boldly assume the role of pharaoh. Considered by some scholars to be history's first woman of importance, Hatshepsut ascended to the status of pharaoh in the very male-dominated ancient Egypt, and her ascension was even more remarkable as she declared herself ruler through a bold power-play. Her reign, circa 1473-1458 BC, was during a particularly fruitful portion of Egypt's 18th Dynasty. During her time in power, Egypt had the world's largest army, and the ruling families enjoyed a lifestyle on a lavish scale. © Charles Hoffman - Head of Hatshepsut, Osiris Statue Family Intrigue and Ascension to the Throne A timeline of Queen Hatshepsut's life indicates she was born the daughter of King Thutmose I and one of his queens. 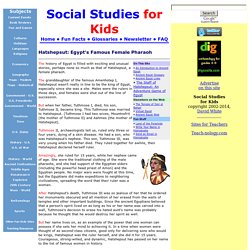 The granddaughter of the famous Amenhotep I, Hatshepsut wasn't really in line to be the king of Egypt, especially since she was a she. Males were the rulers in those days, and females were shut out of the line of succession. But when her father, Tuthmose I, died, his son, Tuthmose II, became king. This Tuthmose was married to Hatshepsut. Tuthmose II, archaeologists tell us, ruled only three or four years, dying of a skin disease.

Amazingly, she ruled for 15 years, while her nephew came of age. After Hatshepsut's death, Tuthmose III was so jealous of her that he ordered her monuments obscured and all mention of her erased from the walls of temples and other important buildings. But her name lives on, as an example of the power that one woman can possess if she sets her mind to achieving it. Graphics courtesy of ArtToday. Ancient egyptian kings queens hatshepsut. Hatshepsut The Woman Who Was King 1473–1458 BC Although the status of women in ancient Egypt was higher than in any other ancient civilization, the notion that a woman could be king was abhorrent to the Egyptians. 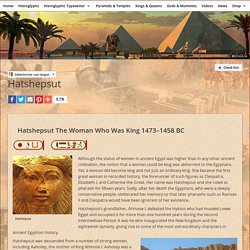 Yet, a woman did become king and not just an ordinary king. She became the first great woman in recorded history, the forerunner of such figures as Cleopatra, Elizabeth I, and Catherine the Great. Her name was Hatshepsut and she ruled as pharaoh for fifteen years. Sadly, after her death the Egyptians, who were a deeply conservative people, obliterated her memory so that later pharaohs such as Ramses II and Cleopatra would have been ignorant of her existence. Hatshepsut’s grandfather, Ahmose I, defeated the Hyksos who had invaded Lower Egypt and occupied it for more than one hundred years during the Second Intermediate Period. Hatshepsut for Kids - Facts from History for Kids. Hatshepsut (hat-shep-soot) In ancient Egypt, all pharaohs were supposed to be men. 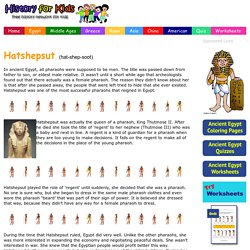 The title was passed down from father to son, or eldest male relative. It wasn’t until a short while ago that archeologists found out that there actually was a female pharaoh. The reason they didn’t know about her is that after she passed away, the people that were left tried to hide that she ever existed. Ancient Egyptian Biography for Kids: Hatshepsut. History >> Biography >> Ancient Egypt for Kids Occupation: Pharaoh of Egypt Born: 1508 BC Died: 1458 BC Best known for: The most powerful woman pharaohBiography: A Princess Hatshepsut was born an Egyptian princess. 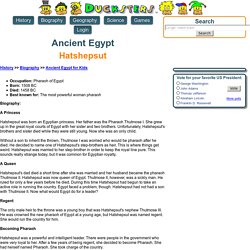 Her father was the Pharaoh Thutmose I. She grew up in the great royal courts of Egypt with her sister and two brothers. Unfortunately, Hatshepsut's brothers and sister died while they were still young. Without a son to inherit the thrown, Thutmose I was worried who would be pharaoh after he died. A Queen Hatshepsut's dad died a short time after she was married and her husband became the pharaoh Thutmose II.

Regent The only male heir to the throne was a young boy that was Hatshepsut's nephew Thutmose III. Becoming Pharaoh Hatshepsut was a powerful and intelligent leader. Ruling Egypt Hatshepsut was a gifted and cunning leader.