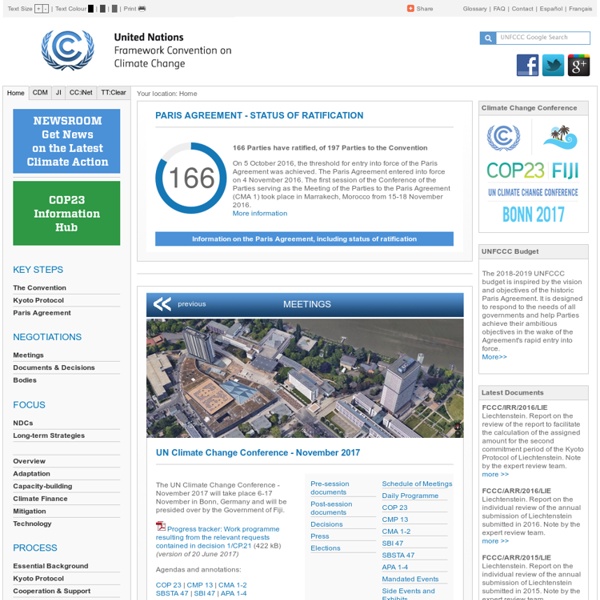 OCDE OBSERVER - MARS 2010 - Climate change and agriculture At least 14% of global greenhouse gas emissions come directly from the farm sector. That is more than transport and not far behind the contribution from industry. How does agriculture produce such high emissions? The future of the internet: A virtual counter-revolution This site uses cookies. By continuing to browse the site you are agreeing to our use of cookies. Review our cookies information for more details A virtual counter-revolution THE first internet boom, a decade and a half ago, resembled a religious movement. United Nations Climate Change Conference, 3-14 December, Nusa Dua, Bali, Indonesia, (COP 13 and CMP 3) Bali Climate Change Conference - December 2007 The Bali Road Map The 13th session of the Conference of the Parties to the UNFCCC and the 3rd session of the Conference of the Parties serving as the Meeting of the Parties to the Kyoto Protocol took place in Bali and was hosted by the Government of Indonesia. Also sitting were the twenty-seventh sessions of the Subsidiary Body for Implementation (SBI) and the Subsidiary Body for Scientific and Technological Advice (SBSTA) and the resumed fourth session of the Ad hoc Working Group on Further Commitments for Annex I Parties under the Kyoto Protocol (AWG-KP). The Bali Climate Change Conference brought together more than 10,000 participants, including representatives of over 180 countries together with observers from intergovernmental and non-governmental organisations and the media. Governments adopted the Bali Road Map, a set of decisions that represented the various tracks that were seen as key to reaching a global climate deal.

These countries are making polluters pay This story was reproduced here as part of the Climate Desk collaboration. Solving climate change is essentially an economic problem: How do you force companies and consumers to pay for the damage caused by the fossil fuels they consume? Let me explain: Without a price on carbon emissions, big polluters don’t pay for the greenhouse gases that they release into the atmosphere. The real cost of that pollution is borne by the planet in the form of global warming. So one of the most common strategies for reducing emissions is “cap-and-trade”: Polluters purchase or bid on a limited number of permits, which allow them to emit a certain amount of CO2. A regulated market is then created in which permits can be bought and sold.

Papers of the Board of Longitude The sixty-eight volumes of the papers of the Board of Longitude document in rich detail many of this public institution’s remarkably wide-ranging activities over more than a century (1714-1828). The 1714 Longitude Act nominated twenty-two Commissioners, including parliamentarians, administrators, scholars and naval officers. Their official tasks were to judge proposals for determining longitude at sea, fund experiments to try what seemed viable projects, and reward schemes judged successful according to the Act’s stringent criteria. The current disposition of these archives is mainly due to the nineteenth century astronomer George Airy, a member of the Board when it was abolished in 1828. Its papers were then divided up between the Admiralty and the Royal Society.

FVM - Climate change and food Production and consumption of food generate emissions of greenhouse gases. We call this the carbon footprint. Production and consumption of food accounts for 22–31% of the EU countries' overall impact on the climate in the form of greenhouse gas emissions. Different foods have different carbon footprints. If you think that California is dry now, wait until the 2050s This story was originally published by Slate and is reproduced here as part of the Climate Desk collaboration. When it comes to drought in the West, we ain’t seen nothin’ yet. That’s the conclusion from a new study that links an increasing risk of decades-long drought episodes in the western United States to human-induced climate change. The study predicts drought severity outside the bounds of what’s thought to have occurred over the past 1,000 years, based on local tree-ring records. “It’s certainly not good news,” said co-author Jason Smerdon, a climate scientist at Columbia University’s Lamont-Doherty Earth Observatory. The study was published Thursday in the inaugural issue of Science Advances, an open-access journal from AAAS, the same publisher as Science.

Megacities @ National Geographic Magazine Get a taste of what awaits you in print from this compelling excerpt. There once was a time when big cities thrilled and amazed people. "It is the metropolis of the universe, the garden of the world," Ibn Khaldun, the Arab historian, wrote of Cairo in 1382. English traveler Thomas Coryat described Renaissance Venice as a "beautiful queene." French artist Marcel Duchamp, in 1915, called New York City "a complete work of art." Protests, oil prices add fuel to the divestment fire It was a move straight from the student activism playbook: On Thursday, Feb. 12, at 10 a.m., 34 students showed up and held a sit-in at Harvard’s Massachusetts Hall in honor of the upcoming Global Divestment Day. There were the usual sit-in discussions. Was the offer that the school’s president, Drew Gilpin Faust, made to meet with the occupiers, but in a different building, a sincere olive branch extended towards community dialogue? Or just a ruse to get them out of the building that houses her office? How to handle the campus police, who were trying to encourage the Mass Hall occupiers to leave by keeping them from using the building’s bathrooms?

Bali Road Map After the 2007 United Nations Climate Change Conference on the island Bali in Indonesia in December, 2007 the participating nations adopted the Bali Road Map as a two-year process to finalizing a binding agreement in 2009 in Copenhagen. The conference encompassed meetings of several bodies, including the 13th Conference of the Parties to the United Nations Framework Convention on Climate Change (COP 13) and the 3rd Meeting of the Parties to the Kyoto Protocol (MOP 3 or CMP 3). The Bali Road Map includes the Bali Action Plan (BAP) that was adopted by Decision 1/CP.13 of the COP-13. It also includes the Ad Hoc Working Group on Further Commitments for Annex I Parties under the Kyoto Protocol (AWG-KP)[1] negotiations and their 2009 deadline, the launch of the Adaptation Fund, the scope and content of the Article 9 review of the Kyoto Protocol, as well as decisions on technology transfer and on reducing emissions from deforestation.[2] Bali Action Plan[edit]