That time Vancouver's hippies took over Stanley Park 50 years ago. Carol Reid was 23 years old when she donned a garland of iris flowers and walked out the door of her Fourth Avenue home to join hundreds of hippies making their way to Stanley Park. 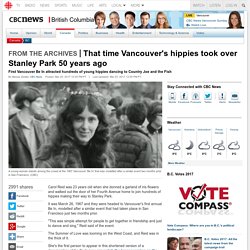 It was March 26, 1967 and they were headed to Vancouver's first annual Be In, modelled after a similar event that had taken place in San Francisco just two months prior. "This was simple attempt for people to get together in friendship and just to dance and sing," Reid said of the event. The Summer of Love was looming on the West Coast, and Reid was in the thick of it. The Wildlife Thrift Store. 6 surviving vintage murals in Vancouver. Written by Kendall Walters for Forbidden Vancouver Walking Tours May is Mural Month at Vancity Buzz. 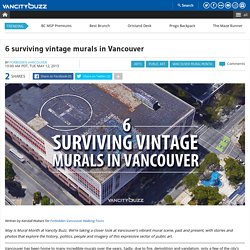 We’re taking a closer look at Vancouver’s vibrant mural scene, past and present, with stories and photos that explore the history, politics, people and imagery of this expressive sector of public art. Vancouver has been home to many incredible murals over the years. Sadly, due to fire, demolition and vandalism, only a few of the city’s older works have survived the years. During their historical walking tours, Forbidden Vancouver storytellers are often asked about vintage murals. 1. Fraser Wilson Mural. Painted in 1947, the Fraser Wilson Mural depicts B.C.’s resource industries. Done in the social realist style popularized by the famous Workers Public Administration murals in San Francisco’s Colt Tower, the Fraser Wilson Mural is a colourful piece. David H. T. Wong illustrates Chinese history in North America with Escape to Gold Mountain. 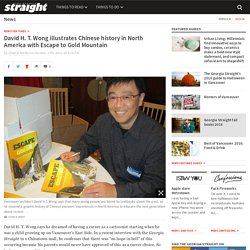 T. Wong says he dreamed of having a career as a cartoonist starting when he was a child growing up on Vancouver’s East Side. In a recent interview with the Georgia Straight in a Chinatown mall, he confesses that there was “no hope in hell” of this occurring because his parents would never have approved of this as a career choice. So he became an architect. On the side, he spent a great deal of time volunteering as a community activist on behalf of Chinese head-tax payers, environmental initiatives, and other causes. 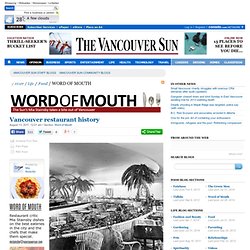 Aberthau House. The first notably large residential property in Point Grey, a distinct municipality from the City of Vancouver until 1929, this edifice was designed by British Columbia’s respected, but largely undiscovered, architect, Samuel Maclure.[1] It serves as an example of Tudorbethan architecture, one of Maclure’s famed specialties, the other being the American Craftsman Style. 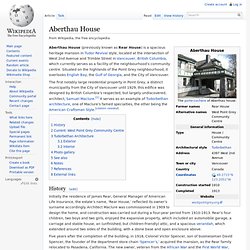 [citation needed] History[edit] Colonel Victor Spencer family. Search Results “you should know” YOU SHOULD KNOW: The History Of The City’s Grandview-Woodland Neighbourhood colour photos by: Martin Knowles by Stevie Wilson | When we hear the term “Grandview” we typically think of The Drive, cheap pizza joints, and the transit circus known as the Commercial-Broadway Station.

With a geographical reach stretching all the way down to Burrard Inlet, however, the Grandview-Woodland area has plenty more to offer those who want to look a little further. One fun way to explore the neighbourhood is to try the Vancouver Heritage Foundation’s 11th Annual Heritage House Tour on June 2nd. Museum of Vancouver. 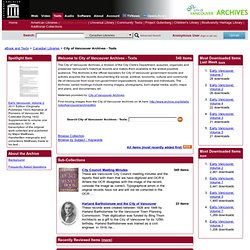 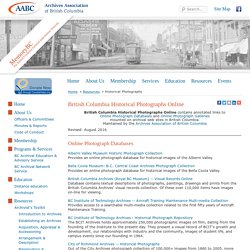 City of Vancouver Archives - Texts : Free Texts. 5 things you should know about the Waldorf Hotel. The Waldorf Hotel has some serious history and it's about to make some more as Vancouver's premier multi-purpose concept space In case you didn't hear on Facebook, the Waldorf Hotel threw a big Halloween party to celebrate its relaunch on October 30, 2010. 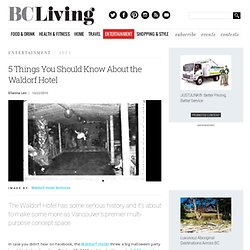 Judging by the nearly 5,000 people who RSVP'd for the free event, Vancouver is excited to welcome this kind of innovative, multi-purpose space. I spoke to the hotel’s "brand manager," Daniel Fazio, and got him to tell me five things people should know about this storied space. "We uncovered a lot of things that we didn’t know before," he said.

Vancouver Collection on Pinterest. Most Beautiful Photos from Vancouver's History. The portrait of Mt. 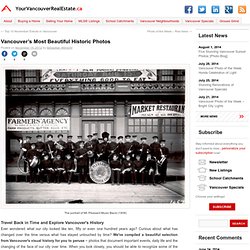 Pleasant Music Band (1908) Travel Back in Time and Explore Vancouver's History Ever wondered what our city looked like ten, fifty or even one hundred years ago? Curious about what has changed over the time versus what has stayed untouched by time? Re:place Magazine. A painter at VanDusen Gardens in July, 1975. Item # CVA 1502-425. It was in 1975 that it became easier to get to the airport, VanDusen opened and there was a dramatic standoff at the BC Penitentiary. By Chuck Davis, The History of Vancouver Photos courtesy of Vancouver Archives Read more The Credit Foncier Building, photographed in 1974, was designated this year as a Heritage Building.

[Car crash on Clark Drive and apartment building fire] : Vancouver Fire and Rescue Services. <div style="padding:5px; font-size:80%; width:300px; background-color:white; margin-left:auto; margin-right:auto; border:1px dashed gray;"> Internet Archive's<! --'--> in-browser video player requires JavaScript to be enabled. It appears your browser does not have it turned on. Please see your browser settings for this feature. </div> Item is an organizational record film documenting firefighters tending to a car crash on Clark Drive and an apartment building fire. A Plan for the City of Vancouver, British Columbia, including a General Plan of the Region : Vancouver Town Planning Commission ; Harland Bartholomew and Associates.

The Life and Death of the Englesea Lodge — Englesea Lodge on February 1, 1981 On Sunday February 1, 1981 shortly before 9:00 a.m., George Wright, a 70-something caretaker was working at the Englesea Lodge when he spotted fire coming from the building’s basement storage area. “There was a big boom and the fire rushed out at me. It threw me back against the wall,” he told a reporter. Wright barely managed to escape through the rear basement door, but flames were already tearing up through two light shafts and up the elevator shaft and spreading through the floors of the seven-storey apartment building.

Urban development & local vancouver history. Coal Harbour Vancouver: Before Now. Coal Harbour is recognized today as a mature neighbourhood nestled between the Seawall, Stanely Park and West Georgia. Now known as one of Vancouver’s most prestigious waterfront communities, Coal Harbour’s humble beginning is less identifiable since its overhaul in the 90′s. Wanting to rehash the past of this now luxurious master planned waterfront community – I did a bit of digging. Mid 1800′sOriginally, the site was inhabited by the Coast Salish and Squamish Indians (First Nations) who lived and prospered from the land. Vancouver’s Waldorf Hotel & Its Long Standing Affair with Tiki.

Heritage advocates and urban designers alike bemoan the redevelopment projects around Vancouver that retain just the facade of an earlier building, especially one with architectural and contextual merit. Vancouver Heritage Foundation, Author at Spacing Vancouver.