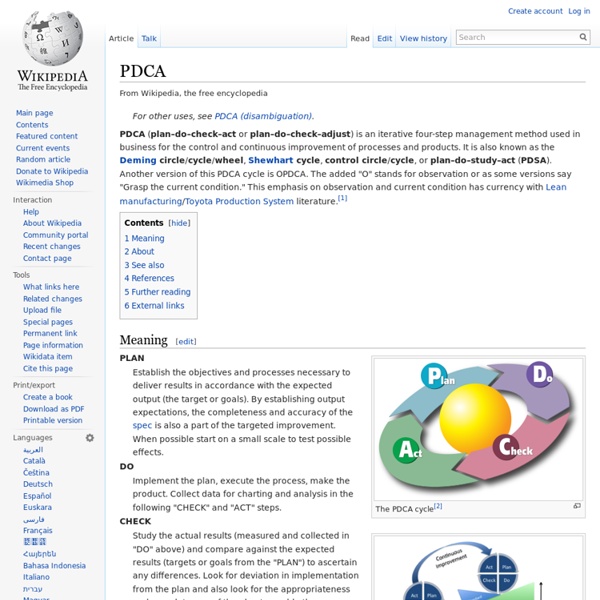 PDCA (plan–do–check–act or plan–do–check–adjust) is an iterative four-step management method used in business for the control and continuous improvement of processes and products. It is also known as the Deming circle/cycle/wheel, Shewhart cycle, control circle/cycle, or plan–do–study–act (PDSA). Another version of this PDCA cycle is OPDCA. The added "O" stands for observation or as some versions say "Grasp the current condition." This emphasis on observation and current condition has currency with Lean manufacturing/Toyota Production System literature.[1] Meaning[edit] Continuous quality improvement with PDCA Establish the objectives and processes necessary to deliver results in accordance with the expected output (the target or goals). Implement the plan, execute the process, make the product. Study the actual results (measured and collected in "DO" above) and compare against the expected results (targets or goals from the "PLAN") to ascertain any differences. About[edit] See also[edit]

Coaching Tools 101: The Urgent Important Matrix - What is it and How To Use it! Well, Former US President Eisenhower used this so-called “Eisenhower Principle” to organize his tasks. He is quoted as saying, “What is important is seldom urgent and what is urgent is seldom important.” It was Dr Stephen Covey (of “The 7 Habits of Highly Effective People” fame) who took these concepts mainstream, calling it The Urgent Important Matrix in his famous book . Quadrant 1 – Crises or “Important AND Urgent” Tasks 4 Things You Thought Were True About Time Management - Amy Gallo by Amy Gallo | 1:00 PM July 22, 2014 I don’t know anyone who doesn’t struggle with how to make the most of their time at work. How do you stay on top of an overflowing inbox? How do you get work done when your day is taken up by meetings? How can you get through a continually expanding to-do list? How do you even find time to make a list in the first place?

Leadership Style Survey This questionnaire contains statements about leadership style beliefs. Next to each statement, circle the number that represents how strongly you feel about the statement by using the following scoring system: Almost Always True — 5 Frequently True — 4 Occasionally True — 3 Seldom True — 2 Almost Never True — 1 Employee Effectiveness - The Clemmer Group Webinar: 9 Ways to Build Effective Relationships “No man is an island, entire of itself; every man is a piece of the continent, a part of the main.” These are a few lines of a poem penned by the metaphysical English poet, John Donne, around the time of Shakespeare. Community, interdependence, and oneness has been a central part of many ancient philosophies […]

Kotter's 8-Step Change Model - Change Management Tools from Mind Tools "Change is the only constant."– Heraclitus, Greek philosopher What was true more than 2,000 years ago is just as true today. We live in a world where "business as usual" is change. Team building training and development. Before exhibiting the signs of effective teamwork which were listed in 'What is Effective Teamwork?' your team will probably need to pass through several stages of development, during which other signs or characteristics will be exhibited. We us a simple model based on four essential stages of development. It has been found to be very useful in helping teams and team leaders to understand team development. This model will help you and your team members not only to understand, but to then agree where they are in the development process.

How To Selectively Sync Folders With Google Drive Google Drive is perhaps one of the strongest Dropbox competitors in the market right now. Being a Google product the app and its web version are just a bigger team for Dropbox to contend with. Google Docs, Google Sheets, and Google Slides are built to save documents to it. Given everything Google Drive has going for it, it might surprise you that up until a few days ago it lacked a very essential feature that Dropbox has had for ages; selective folder syncing.

How to develop leadership skills Innovation distinguishes between a leader and a follower Steve Jobs (founder of Apple) The following exercise will ask you 50 questions about your leadership style, and then give you an idea of your typical styles. If you are still a student you might like to answer the questions as you would if you were a manager in an organisation, rather than the way you would if, for example, you were president of a student society where the leadership style is more casual than that in most work environments. Now make a note of your scores which can vary up to a maximum of 50 for each style. The highest scores should suggest your most liked styles of leadership, and the lowest scores, the styles that are least like you.

10 requirements of the perfect manager If you could hire your next boss, what selection criteria would you use? Alan Norton shares a make-believe want ad aimed at finding the ideal manager. Haven't you wished at least once that you could hire your next boss? You might win the lottery, buy the company, and do just that. But chances are if that happened, you would be out the door in less time than it took to pick the numbers. One of the wonderful things about being a writer is that I don't have to win the lottery for my daydreams to become reality. How to Think When I applied for my faculty job at the MIT Media Lab, I had to write a teaching statement. One of the things I proposed was to teach a class called “How to Think,” which would focus on how to be creative, thoughtful, and powerful in a world where problems are extremely complex, targets are continuously moving, and our brains often seem like nodes of enormous networks that constantly reconfigure. In the process of thinking about this, I composed 10 rules, which I sometimes share with students. I’ve listed them here, followed by some practical advice on implementation.

This Is How To Be Productive: 5 New Secrets Proven By Research Want to know how to be productive? Create goals, make a plan and execute. We all know this is a good idea… and it never, ever seems to work. It’s like simplifying boxing down to “Just go into the ring and punch the other guy until he’s knocked out.” Sounds easy. (Hint: it’s not that easy.)

OODA Loops - Decision-Making Skills Training from MindTools.com Understanding the Decision Cycle Observation is the first step. © iStockphoto/DivaNir4a Has it ever struck you just how many military terms have become everyday terms in business-speak? War and business are often compared and contrasted. As well as "fighting off threats" or "engaging in a price war", we talk about "gathering intelligence", "making a pre-emptive strike", and even trying to "out-maneuver" the competition.

25 Google Drive Tips You’ve Probably Never Heard Before Recently I moved over from Dropbox to Google Drive and found a few unexpected benefits. At first I had a little trouble managing the space since the 1TB on my Google Drive was bigger than my HDD, but after I got that sorted I started to learn some of the deeper features of Google Drive, some of which are pretty cool. Below is a list of the top tips and tricks I have learned from playing with Google Drive over the last few months. Work Well with Others Google drive got it’s early breaks in the market by being far superior at collaborating with others than any other tool out there. This still holds true today.