Hitler will send no warning

Photos of 904 children who survived Buchenwald concentration camp. Echoes of the Holocaust. Children Who Survived the Holocaust: Reflections of a Child Survivor/Psychiatrist Robert Krell, M.D. * The world of child survivors of the Holocaust should interest our profession for many reasons. 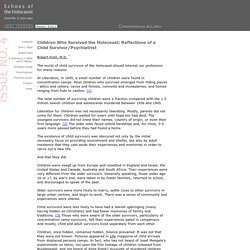 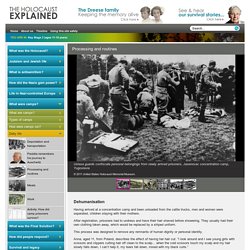 After registration, prisoners had to undress and have their hair shaved before showering. They usually had their own clothing taken away, which would be replaced by a striped uniform. This process was designed to remove any remnants of human dignity or personal identity. Anna, aged 11, from Poland, describes the effect of having her hair cut: “I look around and I see young girls with scissors and clippers cutting hair off clean to the scalp... when the cold scissors touch my scalp and my hair slowly falls down, I can’t help it, my tears fall down, mixed with my black curls.” Mel, aged 15, from Czechoslovakia, goes on: “We all looked alike...

Jacob, aged 17, describes the clothing he was given: “From there we went to the next room. Daily routines Daily routines were also designed to reduce prisoners to mere numbers. A child in the Nazi concentration camps survives by his wits. EL PASO — Starving and trudging for 12 days through snow and freezing rain in lice-infested rags, 16-year-old old David Kaplan was marching to an almost certain death. 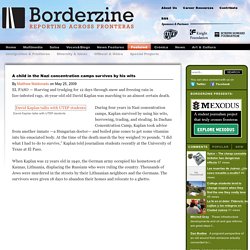 David Kaplan talks with UTEP students During four years in Nazi concentration camps, Kaplan survived by using his wits, borrowing, trading, and stealing. In Dachau Concentration Camp, Kaplan took advice from another inmate —a Hungarian doctor— and boiled pine cones to get some vitamins into his emaciated body. At the time of the death march the boy weighed 70 pounds. “I did what I had to do to survive,” Kaplan told journalism students recently at the University of Texas at El Paso. World War II History: The Holocaust for Kids. History >> World War 2 for Kids What was it? 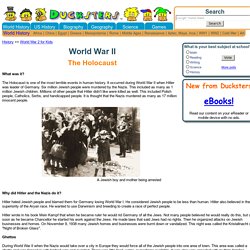 The Holocaust is one of the most terrible events in human history. It occurred during World War II when Hitler was leader of Germany. Six million Jewish people were murdered by the Nazis. This included as many as 1 million Jewish children. Millions of other people that Hitler didn't like were killed as well. A Jewish boy and mother being arrested Why did Hitler and the Nazis do it? Selection at the Concentration Camps - Key Stage 3 - The Holocaust Explained. Once the Jews were unloaded and separated into male and female lines, they were then subjected to a selection process. 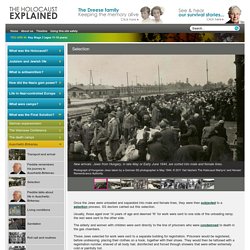 SS doctors carried out this selection. Usually, those aged over 14 years of age and deemed ‘fit’ for work were sent to one side of the unloading ramp; the rest were sent to the other side. The elderly and women with children were sent directly to the line of prisoners who were condemned to death in the gas chambers. Those Jews selected for work were sent to a separate building for registration.

Prisoners would be registered, before undressing, placing their clothes on a hook, together with their shoes. A Child of the Holocaust recalls life in notorious concentration camp. Imagine spending your formative years in a Nazi concentration camp, separated from family members and trying to understand the horror going on around you. 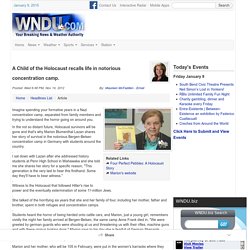 In the not so distant future, Holocaust survivors will be gone and that's why Marion Blumenthal Lazan shares her story of survival in the notorious Bergen-Belsen concentration camp in Germany with students around the country..I sat down with Lazan after she addressed history students at Penn High School in Mishawaka and she told me she shares her story for a specific reason, "This generation is the very last to hear this firsthand.

Marion and her mother, who will be 105 in February, were put in the women's barracks where they slept together in one cot, sharing one thin blanket with no heat in bitterly cold German winters. Their barrack was made to house 100 people but when Marion and her mother lived there, there were 600 women and children packed in. She says her mother's inner strength and positive outlook on life kept her alive. History & Overview of Terezin. As Hitler transported tens of thousands of communal objects to Prague, their owners were rounded up and shipped first to a city built northwest of Prague in 1780 by Joseph II. 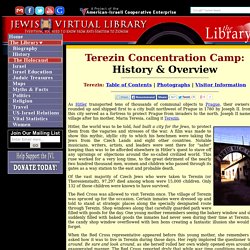 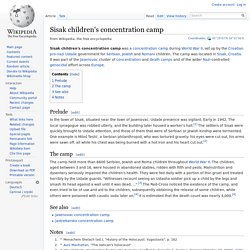 The camp was located in Sisak, Croatia. It was part of the Jasenovac cluster of concentration and death camps and of the wider Nazi-controlled genocidal effort across Europe. Prelude[edit]