The Official Guide For Canadians Flying Out Of U.S. Airports (from Vancouver & area) This guide will attempt to organize everything someone living in the Vancouver area might want to know about flying out of U.S. airports. 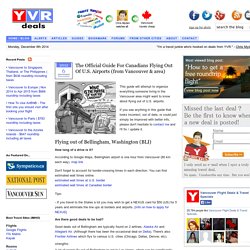 If you see anything in this guide that looks incorrect, out of date, or could just simply be improved with better info, please don't hesitate to contact me and I'll fix / update it. How long of a drive is it? According to Google Maps, Bellingham airport is one hour from Vancouver (80 km each way). map link Don't forget to account for border-crossing times in each direction. You can find estimated wait times online. estimated wait times at U.S. borderestimated wait times at Canadian border Tips: - If you travel to the States a lot you may wish to get a NEXUS card for $50 (US) for 5 years and eliminate the line ups at borders and airports. The Death Of Errol Flynn And His Under-Age Girlfriend Beverly Aadland. Errol Flynn and Beverly Aadland, 1959. 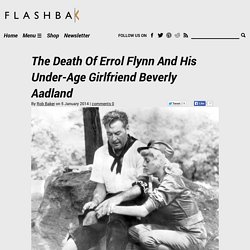 Associated Press. ERROL Flynn once said: ‘I like my whisky old, and my women young’ and the above photo, while not saying anything about his choice of whisky, certainly says something about his taste in women, or should I say girls. Sean Flynn not buried in Cambodia war grave. Remains of Errol Flynn's son may have been found in Cambodia mass grave.

Stone/AP Sean Flynn (r.) is photographed during U.S. operations near Ha Thanh in South Vietnam in 1968. 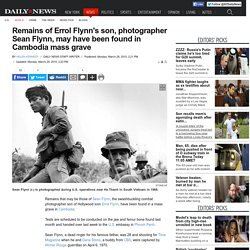 Remains that may be those of Sean Flynn, the swashbuckling combat photographer son of Hollywood icon Errol Flynn, have been found in a mass grave in Cambodia. Tests are scheduled to be conducted on the jaw and femur bone found last month and handed over last week to the U.S. embassy in Phnom Penh. Sean Flynn, a dead ringer for his famous father, was 28 and shooting for Time Magazine when he and Dana Stone, a buddy from CBS, were captured by Khmer Rouge guerrillas on April 6, 1970. They were never heard from again, though some believe they lasted a year in captivity before they were executed. The mysterious fate of the two dashing journalists has been memorialized in several documentaries and books, including "Two of the Missing," and the Clash song, "Sean Flynn," from the album "Combat Rock. 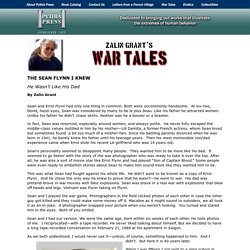 Both were uncommonly handsome. At six-two, blond, hazel eyes, Sean was considered by many to be le plus beau. Like his father he attracted women. The Voyeuristic Adventures of Errol Flynn by Kliph Nesteroff. "The magazine Confidential had been running stories about me ... 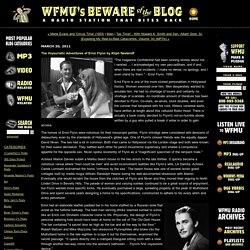 I rankled ... I acknowledged my own peccadilloes, and if and when there are real incidents, I make no denial, no apology, and I even stand by them. " - Errol Flynn, 1959 Errol Flynn is one of the more storied personalities in Hollywood history. Women swooned over him. Men desperately wanted to emulate him. Errol flynn grandson. Sean Flynn (Photojournalist) Last Known Footage. Remembering Grandma... Patrice Wymore Flynn - Lifestyle. Visiting Errol Flynn’s Estate in the “Other” Jamaica. To males of a certain age, one of the indelible images of the early 1960s was Ursula Andress rising out of an azure sea onto a perfect white sliver of beach. 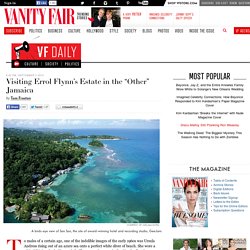 She wore a white bikini and a knife on a belt. That was, of course, in Dr. No, the first James Bond film. As a student in cold and gray New England, I was thinking not just, “Who is that? ,” but also, “Where is that?” Dr. Ian Fleming lived just up the beach from that Dr. Jamaica was a British colony until 1962. How Errol Flynn's son was lost in Cambodia &ndash; all but a pile of bones - Asia. The dangerous, chaotic assignment brought him excitement and fame, but it also led him to his death. 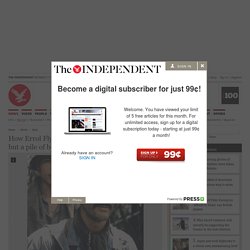 Forty years ago next week, Flynn and another journalist, Dana Stone, disappeared without trace after encountering a hostile checkpoint south-east of Phnom Penh. Now, forensic tests are to be performed on remains that have been dug up in rural Cambodia by two amateur "bone hunters" who claim they have finally answered the mystery as to what happened to the two men, among three dozen journalists to have lost their lives during the war in Cambodia. John Johnson, a spokesman for the US embassy in Phnom Penh, said the remains had been sent to the Pentagon's Joint POW/MIA Accounting Command (JPAC) located in Hawaii where the tests will be conducted.

"Last Friday, the possible remains were delivered to us and we have taken action," he said. "It is hard to speculate how long the tests will take. "Afterwards we all headed back to Phnom Penh, but they said they wanted to go forward. My Wicked, Wicked Ways by Errol Flynn. In Like Flynn - Errol Flynn - Official Web Site. Errol Flynn's Autopsy Report.

Errol Flynn autopsy. KnowBC - the leading source of BC information. Wednesday, October 14 marks the 50th anniversary of the death in Vancouver of actor Errol Flynn. 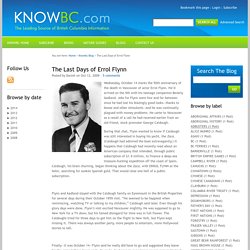 He’d arrived on the 9th with his teenage companion Beverly Aadland. Jobs for Flynn were few and far between since he had lost his blazingly good looks—thanks to booze and other stimulants—and he was continually plagued with money problems. He came to Vancouver as a result of a call he had received earlier from an old friend, stock promoter George Caldough.

During that chat, Flynn wanted to know if Caldough was still interested in buying his yacht, the Zaca. (Caldough had admired the boat extravagantly.) Flynn and Aadland stayed with the Caldough family on Eyremount in the British Properties for several days during their October 1959 visit. Finally—it was October 14—Flynn said he really did have to go and suggested they leave for the airport three hours early. Errol Flynn, warts and all: How the broke Hollywood film star met his end in Vancouver. Over July and August, more than five million foreigners will come to Canada on their summer vacation. 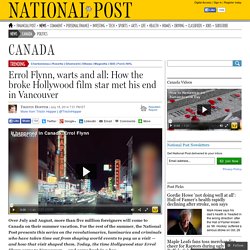 For the rest of the summer, the National Post presents this series on the revolutionaries, luminaries and criminals who have taken time out from shaping world events to pay us a visit — and how that visit shaped them. The death of a ladies’ man: Errol Flynn’s Vancouver autopsy. Canada’s open-records laws invariably favour personal privacy over the public’s right to know. 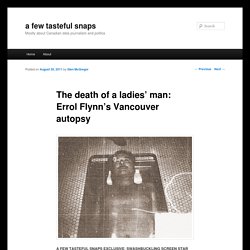 Any information that pertains to an individual who is not a government employee is blotted out with black Magic Marker from every request for records. But there is one little-known quirk in the Freedom of Information laws in Ontario and British Columbia that allows the release of sometimes highly personal information. The privacy provisions expire 30 years after the death of the subject. I first learned of limitation when I successfully obtained the autopsy records for Tim Horton, an NHL hockey player and founder of an iconic chain of Canadian donut shops. A friend recently told me that he had once seen autopsy records for swashbuckling star Errol Flynn, who had died in Vancouver, British Columbia, on October 14, 1959. The Realer Than Reel Reason Vancouver Is No Longer #1. ShwashbuckleThis SwordplayVille I've really got the answer now. And it has nothing to do with Malahat Mountain, slippery bike lanes or the way a certain very fine civic politician keeps losing her train of thought every time a gust of wind musses her hair.

No. Instead, it all has to do with the Lotuslandian end-of-life times and death of Mr.