A Brief History of Toys in Pre-modern Japan

Japanese Dolls. An Ichimatsu-ish doll from my small collection. 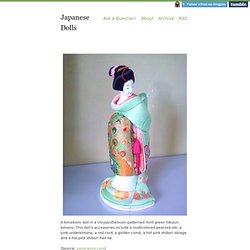 This doll is wearing a burnt orange furisode decorated with a hemp leaf pattern as well as fall and winter motifs (maple leaves, chrysanthemums, and plum blossoms), a mauve and gold obi, and a pale pink obiage. According to the seller, she was made by a dollmaking student. kokeshishop: 日本吉 - NIPPON-KICHI. Dolls & Toys – Ningyo & Omocha.

人形＆おもちゃ When we are moved by a “handmade” artifact, it is perhaps because we are on the same wavelength as the object, and through it, with its maker. 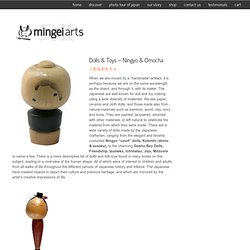 The Japanese are well known for doll and toy making using a wide diversity of materials. We see paper, ceramic and cloth dolls, and those made also from natural materials such as bamboo, wood, clay, ivory and bone. They are painted, lacquered, adorned with other materials, or left natural to celebrate the material from which they were made. Traditional Japanese Toys - Fuku Warai - Virtual Culture. Japan has many traditional toys and games that have kept children amused since the middle ages. 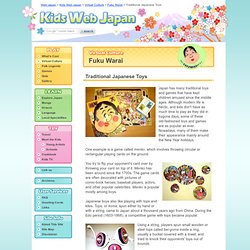 Although modern life is hectic, and kids don't have as much time to play as they did in bygone days, some of these old-fashioned toys and games are as popular as ever. Nowadays, many of them make their appearance mainly around the New Year holidays. One example is a game called menko, which involves throwing circular or rectangular playing cards on the ground. You try to flip your opponent's card over by throwing your card on top of it. Menko has been around since the 1700s. Ezooshi illustrated books. [ . 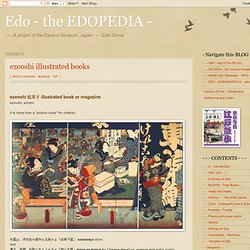 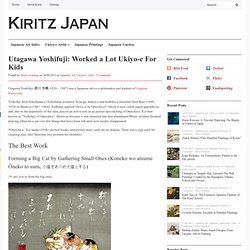 Yoshifuji drew Yokohama-e (Yokohama pictures), bijin-ga, musya-e and hashika-e (measles) from Kaei (1848 – 1854) to Bunkyu (1861 -1864). Yoshifuji applied Ukiyo-e on Omocha-e*, which is now called paper appendices, and, due to the popularity of the idea, played an active role as an painter specializing in Omocha-e. It is best known as “Yoshifuji of Omocha-e”. However, because it was intended fate that abandoned When children finished playing, Omocha-e are very few things that have been left until now mostly disappeared. *Omocha-e: Toy masks of Oni, picture books, and picture story cards are on display. Doll exhibit gives a glimpse into the private lives of Japanese. A.M. 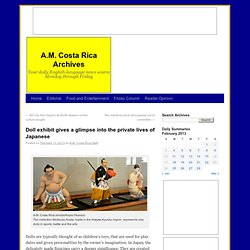 Costa Rica photos/Kayla PearsonThe collection Muñecas Acata, made in the Hakata Kyushu region, represents clay dolls in sports, battle and the arts Dolls are typically thought of as children’s toys, that are used for play dates and given personalities by the owner’s imagination. In Japan, the delicately made figurines carry a deeper significance. They are created with intriguing designs, colors and shapes and collected as an embodiment of the ideals of the people.

“A tradition of 1,000 years which has passed from generation to generation, the doll is not a simple game, but is an art in this oriental country,” said a release from the Museo Nacional de Costa Rica. The Japanese Embassy in Costa Rica, Japan Foundation and the national museum are hosting an exhibition that showcases 75 of the traditional dolls. The exhibit is located in the museum’s west hall for temporary exhibits. LACMA Collections. In Edo society, games were an outlet of fun for adults as well as children. 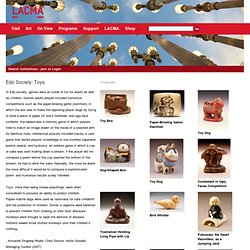 Games adults played included humorous competitions such as the paper-blowing game (kamifuki), in which the aim was to make the opposing player laugh by trying to blow a piece of paper off one’s forehead, and ugly-face contests. Kai-awase was a memory game in which players tried to match an image drawn on the inside of a seashell with its identical mate. Intellectual pursuits included karuta, a card game that tested players’ knowledge of one hundred Japanese poems (waka), and kyokusui, an outdoor game in which a cup of sake was sent floating down a stream; if the player did not compose a poem before the cup reached the bottom of the stream, he had to drink the sake.

New exhibition presents the remarkable evolution of Japanese toys. Published on : Wednesday, October 30, 2013 The Japanese imagination has led to many of the world’s most extraordinary toys. 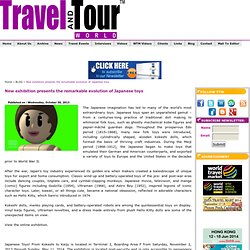 Japanese toys span an unparalleled gamut – from a centuries-long practice of traditional doll making to whimsical folk toys, such as ghostly mechanical kobe figures and papier-mâché guardian dogs. Throughout the prosperous Edo period (1615–1868), many new folk toys were introduced, including cylindrically shaped, wooden kokeshi dolls, which formed the basis of thriving craft industries. During the Meiji period (1868–1912), the Japanese began to make toys that emulated their German and American counterparts, and exported a variety of toys to Europe and the United States in the decades prior to World War II. After the war, Japan’s toy industry experienced its golden era when makers created a kaleidoscope of unique toys for export and home consumption. Japanese Children's Literature 17-19c - Dissertation Reviews.

A review of Visualizing the Child: Japanese Children’s Literature in the Age of Woodblock Print, 1678-1888, by Kristin Holly Williams. 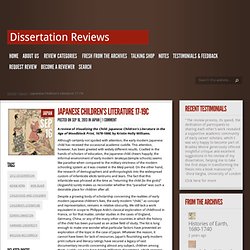 Although certainly not spoiled with attention, the early modern Japanese child has received the occasional academic cuddle. This attention, however, has been greeted with widely different results. Cradled in the hands of scholars of education, the Japanese child cheers happily; the informal environment of early modern terakoya (temple schools) seems like paradise when compared to the military strictness of the modern schooling system as it was created in the Meiji period. Nirc.nanzan-u.ac.jp/nfile/1816. Pdf.jpf-sydney.org/newvoices/4/chapter1.pdf. Www.wako.ac.jp/human/kiyo/file/2011-0625-1138.pdf. Japanese Toy Exhibition in Ctěnice (Portal of Prague) The first historical evidence of the existence of Japanese toys comes from the Heian period (794–1185). 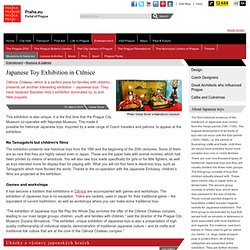 The biggest development of all kinds of toys did not occur until the Edo period (1600–1868), i.e. the period of flourishing crafts and trade. Until then we would have probably found more complex toys only in noble families. Kokeshi dolls: More Than a Pretty Face. Click photo to buy this item in FurugiStar on Etsy Traditional kokeshi ningyo are Japanese dolls with a colourful history and controversial reputation.

They have been associated with miscarried babies and infanticide. They were guardians of children and keepers of their souls. Today, the word kokeshi is a sexual innuendo due to the phallic shape. Kokeshi were originally souvenirs for Japanese tourists and offered entertainment to children but developed into something much more. If I bring up the topic of ‘kokeshi’ in Japan, the younger generation usually respond with a smirk. Click photo to buy these traditional Japanese kokeshi dolls. Kokeshi Dolls Gallery - Trad Japan Nipponet -

Kokeshi Dolls Kokeshi is a toy that be made of wood turned. Generally it is simple styles that are a spherical head and a cylindrical body. It has started to be made as a souvenir of hotspring tour at Tohoku region since Edo period. Www.indiana.edu/~easc/outreach/educators/boxlessons/documents/toys.pdf. Japanese Toys! From Kokeshi to Kaiju. The Japanese imagination has led to many of the world’s most extraordinary toys. Japanese toys span an unparalleled gamut—from a centuries-long practice of traditional doll making to whimsical folk toys, such as ghostly mechanical kobe figures and papier-mâché guardian dogs. Throughout the prosperous Edo period (1615–1868), many new folk toys originated, including cylindrically shaped, wooden kokeshi dolls, which formed the basis of thriving craft industries. Similar to other folk arts, a toy typically developed through the ingenuity of a single individual or a small group of makers before it spread to other areas and artisans.

Such toys reflect Japanese regional customs, legends, history, and locally available materials. Artisans continue to make a great variety of folk toys in Japan. During the Meiji period (1868–1912), when Japan opened its doors to the West, the country rapidly transformed into a modern, industrialized nation. Japanese Toys! Koma: Edo-Era Toys Reconfigured for Modern Tables. How Dolls Exude the Japanese Sensibility. [From March Issue 2011] March 3rd is Hina Matsuri (the Japanese Doll Festival) or Girl’s Day. This day of celebration is to pray for young girls to grow up healthy, during which it is also customary to display a set of traditional dolls, called hina-ningyou, along with peach blossoms and sweet sake. Behind this custom lies the belief that the dolls will absorb all of life’s suffering, such as illnesses and injuries, instead of the young girls.

In some regions, small, simple hina dolls, made out of paper or grass, are put afloat into rivers or the sea. Typical hina dolls usually include a couple clad in gorgeous garb from the Heian period (794~1192). “The Doll Festival began in earnest in the Edo period (1600~1867),” recounts YOKOYAMA Hisatoshi, assistant administrative manager at Kyugetsu Co., Ltd., a doll manufacturer with almost 170 years of history. March is not the only time during the year when dolls are displayed. Bunraku puppets are meticulously designed to mimic human movement. Konnichiwa and Grüezi - 150 years of Japan and Switzerland.

19 April 2014 – 5 October 2014 A special exhibition will take place at the Toy Worlds Museum Basle to celebrate the 150th anniversary of Japanese-Swiss diplomacy and friendship. The first documented reference in Switzerland to Japan dates from 1522. In 1864, Switzerland finalised one of the first bilateral trade and friendship treaties with Japan, giving rise to a dynamic economic exchange. The exhibition has been made possible with the cooperation of the Japanese Information and Cultural Centre of the Japanese Embassy in Berne, and the Japan Cultural Institute in Cologne. National Diet Library. Bimonthly Magazine REKIHAKU｜Publication｜National Museum of Japanese History.