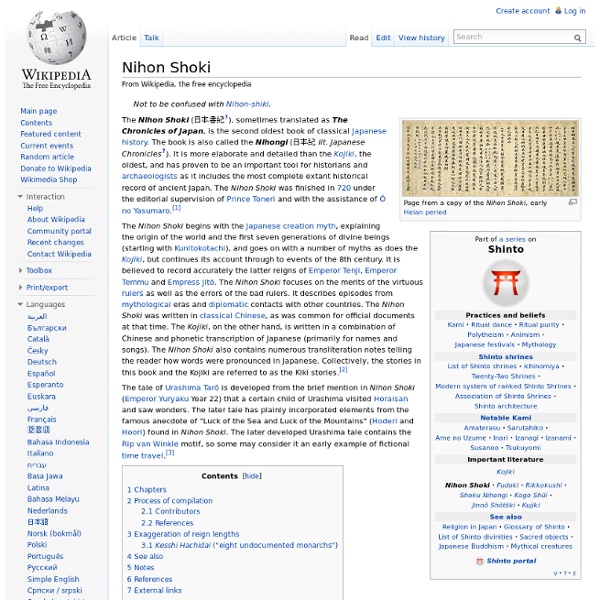 Shintoshu The Shintōshū (神道集?) is a Japanese story book in ten volumes believed to date from the Nanboku-chō period (1336–1392).[1] It illustrates with tales about various shrines the Buddhist honji suijaku theory, according to which Japanese kami were simply local manifestations of the Indian gods of Buddhism. This theory, created and developed mostly by Tendai monks, was never systematized, but was nonetheless very pervasive and very influential.[2] The book had thereafter great influence over literature and the arts.[1] History[edit] The book is believed to have been written during the late Nanboku-chō period, either during the Bunna or the Enbun era.[3] It carries the note Agui-saku (安居院作? The common point of the tales is that, before reincarnating as tutelary kami of an area, a soul has first to be born and suffer there as a human being. The book had a great impact on the literature and arts of the following centuries. References[edit] ^ Jump up to: a b Iwanami Kōjien (広辞苑?)

Kami Amaterasu, one of the central kami in the Shinto faith Kami (Japanese: 神?) are the spirits or phenomena that are worshipped in the religion of Shinto. Etymology[edit] Some etymological suggestions are: Gender is also not implied in the word Kami, and as such it can be used to reference either male or female. History[edit] While Shinto has no founder, no overarching doctrine, and no religious texts, the Kojiki (the Ancient Chronicles of Japan), written in 712 CE, and the Nihonshoki (Chronicles of Japan), written in 720 CE, contain the earliest record of Japanese creation myths. In the ancient Shinto traditions there were 5 defining characteristics of Kami.[13] Kami are of two minds. Kami are an ever-changing concept, but their presence in Japanese life has remained constant. There is a strong tradition of myth-histories in the Shinto faith; one such myth details the appearance of the first emperor, grandson of the Sun Goddess Amaterasu. Shinto belief[edit] Ceremonies and festivals[edit]

Buddhism Religion founded by the Buddha Buddhism (, ) is an Indian religion based on a series of original teachings attributed to Gautama Buddha. It originated in ancient India as a Sramana tradition sometime between the 6th and 4th centuries BCE, spreading through much of Asia. It is the world's fourth-largest religion[3] with over 520 million followers, or over 7% of the global population, known as Buddhists.[6] Buddhism encompasses a variety of traditions, beliefs and spiritual practices largely based on the Buddha's teachings (born Siddhārtha Gautama in the 5th or 4th century BCE) and resulting interpreted philosophies. Two major extant branches of Buddhism are generally recognized by scholars: Theravāda (Pali: "The School of the Elders") and Mahāyāna (Sanskrit: "The Great Vehicle"). Theravada has a widespread following in Sri Lanka and Southeast Asia such as Cambodia, Laos, Myanmar and Thailand. Life of the Buddha Worldview Four Noble Truths – dukkha and its ending The cycle of rebirth Saṃsāra

Kojiki Kojiki (古事記?, "Record of Ancient Matters") is the oldest extant chronicle in Japan, dating from the early 8th century (711–712) and composed by Ō no Yasumaro at the request of Empress Gemmei.[1] The Kojiki is a collection of myths concerning the origin of the four home islands of Japan, and the Kami. Along with the Nihon Shoki, the myths contained in the Kojiki are part of the inspiration behind Shinto practices and myths, including the misogi purification ritual.[2][3][4][5] Structure[edit] The Kojiki contains various songs/poems. While the historical records and myths are written in a form of Chinese with a heavy mixture of Japanese elements, the songs are written with Chinese characters that are only used to convey sounds. Sections[edit] The Kojiki is divided into three parts: the Kamitsumaki (上巻, "first volume"?) The Kamitsumaki, also known as the Kamiyo no Maki (神代巻? Study of the Kojiki[edit] In the Edo period, Motoori Norinaga studied the Kojiki intensively. Manuscripts[edit]

Shinto Shinto priest and priestess. Shinto (神道, Shintō?), also kami-no-michi,[note 1] is the indigenous religion of Japan and the people of Japan.[2] It is defined as an action-centered religion,[3] focused on ritual practices to be carried out diligently, to establish a connection between present-day Japan and its ancient past.[4] Founded in 660 BC according to Japanese mythology,[5] Shinto practices were first recorded and codified in the written historical records of the Kojiki and Nihon Shoki in the 8th century. The word Shinto ("way of the gods") was adopted, originally as Shindo,[8] from the written Chinese Shendao (神道, pinyin: shén dào),[9][note 2] combining two kanji: "shin" (神?) According to Inoue (2003): In modern scholarship, the term is often used with reference to kami worship and related theologies, rituals and practices. Types of Shinto Shinto religious expressions have been distinguished by scholars into a series of categories:[16] Shrine Shinto (神社神道, Jinja-Shintō?) Kami Kannagara

This 390-year-old bonsai tree survived an atomic bomb, and no one knew until 2001 Moses Weisberg was walking his bicycle through the National Arboretum in Northeast Washington when he stopped at a mushroom-shaped tree. The first thing he noticed was the thickness of the trunk, estimated at almost a foot and a half in diameter. And then there was the abundance of spindly leaves, a healthy head of hair for a botanical relic 390 years old. But it was only when he learned the full history of the tree, a Japanese white pine donated in 1976, that he was truly stunned. The tree, a part of the Arboretum’s National Bonsai and Penjing Museum, has not only navigated the perils of age to become the collection’s oldest, but it also survived the blast of an atomic bomb, Little Boy, dropped over Hiroshima, Japan, during World War II. “For one, it’s amazing to think that something could have survived an atomic blast,” said Weisberg, a 26-year-old student at the Georgetown University Law Center. In the winter, the tree is moved to the museum’s climate-controlled Chinese Pavilion.

Buddhism Two major extant branches of Buddhism are generally recognized by scholars: Theravada ("The School of the Elders") and Mahayana ("The Great Vehicle"). Vajrayana, a body of teachings attributed to Indian siddhas, may be viewed as a third branch or merely a part of Mahayana. Theravada has a widespread following in Sri Lanka and Southeast Asia. Mahayana which includes the traditions of Pure Land, Zen, Nichiren Buddhism, Shingon, and Tiantai (Tendai) is found throughout East Asia. Life of the Buddha Relic depicting Gautama leaving home. Main article: Gautama Buddha This narrative draws on the Nidānakathā of the Jataka tales of the Theravada, which is ascribed to Buddhaghoṣa in the 5th century CE. Ascetic Gautama with his five companions, who later comprised the first Sangha. The evidence of the early texts suggests that Siddhārtha Gautama was born in a community that was on the periphery, both geographically and culturally, of the northeastern Indian subcontinent in the fifth century BCE.