50 Great Articles and Essays<br>about Asia. Great reporting about the world's most populous region China Boomtown Girl by Peter Hessler Over the past twenty years, Shenzhen has become home to a social experiment that is as impressive as its economic adventure. 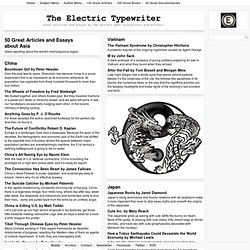 Its population has exploded from three hundred thousand to more than four million. The Wheels of Freedom by Fred Strebeigh We floated together and others floated past. Anything Goes by P. For three decades the author searched fruitlessly for the perfect city. The Future of Conflictby Robert D. Europe is a landscape; East Asia a seascape. China's All-Seeing Eye by Naomi Klein With the help of U.S. defense contractors, China is building the prototype for a high-tech police state, and it’s ready for export. The Connection Has Been Reset by James Fallows China’s Great Firewall is crude, slapdash, and surprisingly easy to breach. The Suicide Catcher by Michael Paterniti China is Killing U.S. by Matt Taibbi Tibet Through Chinese Eyes by Peter Hessler. Asia. 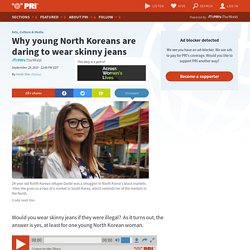 As it turns out, the answer is yes, at least for one young North Korean woman. Danbi and I are browsing through a South Korean market, when she stops to admire a pair of slim fitting pants. “Girls just love these back home!” She declares. By home, she means a city in far-off North Korea. She flips her hair dramatically, and laughs heartily, as she tries on a sparkly hair clip. Danbi is a 24-year-old North Korean refugee, who paints a picture of the totalitarian regime that’s quite different from the one we’re used to seeing, but an account supported by other defectors and those working with North Koreans.

She says she shopped in black markets with smuggled foreign goods and watched American and South Korean TV shows, via smuggled USB sticks, since she was a kid. So she started skipping class and started smuggling goods across the now porous border. I’m struck by how much Danbi sounds like an American teen. The Newly Updated Indic Keyboard App Now Supports 22 Asian Languages. The Indic Keyboard in action with the list of all supported languages. 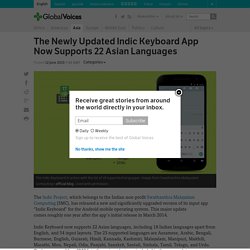 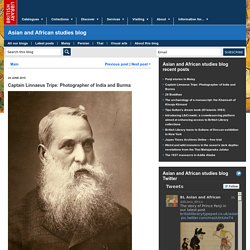 1880s, British Library, Photo 612(1). Once heard, the exotically-named Linnaeus Tripe is difficult to forget. 28 Buddhas. In Theravada Buddhism, 'Buddha' refers to one who has become enlightened through their own efforts and insight. 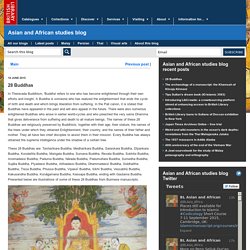 A Buddha is someone who has realized the enlightenment that ends the cycle of birth and death and which brings liberation from suffering. In the Pali canon, it is stated that Buddhas have appeared in the past and will also appear in the future. There were also numerous enlightened Buddhas who arose in earlier world-cycles and who preached the very same Dhamma that gives deliverance from suffering and death to all mature beings. The names of these 28 Buddhas are religiously preserved by Buddhists, together with their age, their stature, the names of the trees under which they obtained Enlightenment, their country, and the names of their father and mother.

They all have two chief disciples to assist them in their mission. Early vocabularies of Malay. Among the Malay manuscripts in the British Library which have just been digitised are a number of vocabulary lists and dictionaries in Malay, compiled by visitors to the region as aids to learning the language. 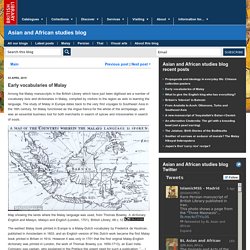 The study of Malay in Europe dates back to the very first voyages to Southeast Asia in the 16th century, for Malay functioned as the lingua franca for the whole of the archipelago, and was an essential business tool for both merchants in search of spices and missionaries in search of souls. Map showing the lands where the Malay language was used, from Thomas Bowrey, A dictionary English and Malayo, Malayo and English (London, 1701). British Library, 68.c.12 The earliest Malay book printed in Europe is a Malay-Dutch vocabulary by Frederick de Houtman, published in Amsterdam in 1603, and an English version of this Dutch work became the first Malay book printed in Britain in 1614.

Thomas Bowrey’s autograph draft of his Malay-English dictionary. Further reading. Malay manuscripts on Javanese history. From 1602 until 1684 - when they were ousted by the Dutch - the English East India Company maintained a ‘factory’ or trading settlement at Banten on the western tip of the island of Java. 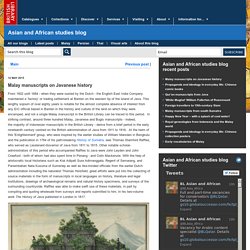 This lengthy sojourn of over eighty years is notable for the almost complete absence of interest from any EIC official based in Banten in the history and culture of the land on which they were encamped, and not a single Malay manuscript in the British Library can be traced to this period. A Jawi sourcebook for the study of Malay palaeography and orthography. Permulaan, 'The beginning', first word of Kitab pengajaran. 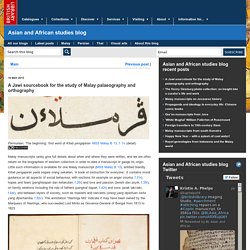 MSS Malay B 13, f. 1v (detail) Malay manuscripts rarely give full details about when and where they were written, and we are often reliant on the biographies of western collectors in order to date a manuscript or gauge its origin. Little such information is available for one Malay manuscript (MSS Malay B 13), entitled blandly Kitab pengajaran pada segala orang sekalian, ‘A book of instruction for everyone’. It contains moral guidance on all aspects of social behaviour, with sections for example on anger (murka, f.31r), hopes and fears (pengharapan dan ketakutan, f.25r) and love and passion (berahi dan asyik, f.35r), on family relations including the role of fathers (pangkat bapak, f.42r) and sons (anak laki-laki, f.44r), and between layers of society, such as masters and servants (orang yang dipertuan serta yang diperhamba, f.52v). Soother of sorrows or seducer of morals? The Malay Hikayat Inderaputera. Hikayat Inderaputera, ‘The tale of Inderaputera’, is a Malay romance about the fantastical adventures of Prince Inderaputera, son of the king of Semantapura. 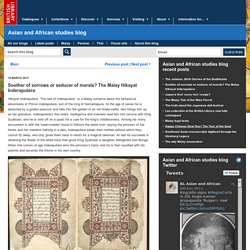 At the age of seven he is abducted by a golden peacock and falls into the garden of an old flower-seller, who brings him up as her grandson. Inderaputera’s fine looks, intelligence and manners lead him into service with King Syahsian, and he is sent off on a quest for a cure for the king’s childlessness. Among his many encounters is with the 'swan-maiden' found in folklore the world over: spying the princess of the fairies and her maidens bathing in a lake, Inderaputera steals their clothes,without which they cannot fly away, and only gives them back in return for a magical talisman.

At last he succeeds in obtaining the flower of the white lotus that gives King Syahsian a daughter, Mengindra Seri Bunga. Sirat al-mustakim, composed by Nuruddin al-Raniri between 1634 and 1644, a copy from Aceh, 19th century. Royal genealogies from Indonesia and the Malay world. Malay manuscripts from south Sumatra. Think ‘Malay manuscript’, think ‘Jawi’ – the modified form of the Arabic script used in Southeast Asia – but this is not invariably the case. 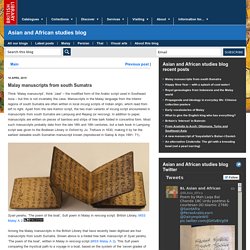 Manuscripts in the Malay language from the interior regions of south Sumatra are often written in local incung scripts of Indian origin, which read from left to right. Apart from the rare Kerinci script, the two main variants of incung script encountered in manuscripts from south Sumatra are Lampung and Rejang (or rencong). Paintings of birds from the collection of Sir Thomas Stamford Raffles. The name of Sir Thomas Stamford Raffles (1781—1826) is best known today for his role in the founding of Singapore, and by a hotel there that bears only a nominal connection with him. By profession a colonial administrator, by inclination he was a passionate naturalist with broad interests in the humanities that first revealed themselves in his administration of Java (1811—15).

Portrait of Sir Stamford Raffles. British Library, Raffles MSS Eur D.742.14.6.8. Panji stories in Malay. Stories of the Javanese culture hero Prince Panji probably date from around the 13th century, and mark the development of a truly Javanese literature no longer overshadowed by the great Indian epics the Ramayana and Mahabharata. Set around the Javanese kingdoms of Kuripan and Daha, the stories tell of Panji’s search for his beloved, Princess Candra Kirana, and his many adventures, undertaken in various disguises and with a range of different names, before the lovers are reunited.

During the Majapahit empire from the 14th to 15th centuries the Panji stories became extremely popular, and the figure of Panji is found engraved on temple reliefs (always wearing a distinctive cap on his head), while the Panji tales came to constitute the repertoire of wayang gedog theatrical performances. Prince Panji (on the right) hands a letter to his clown-retainers (panakawan) Bancak and Dhoyok, in a Javanese Panji romance, 19th century. British Library, Or. 15026, f.85r (det.) Further reading:V.I.

The Jatakas: Birth Stories of the Bodhisatta. The Buddha’s previous lives are the subject of the collection of stories commonly known as the Jatakas, which show how he gradually acquired greater strength and moral stature as his soul passed from one incarnation to the other. These well-known stories were narrated by Gautama Buddha himself during his ministry. There are actually 547 stories but the number is often rounded up to 550. Weird and wild monsters in the ocean’s dark depths: revelations from the Thai Mahajanaka Jataka. The Mahajanaka Jataka is one of the last Ten Birth Tales of the Buddha, which are popular themes in Thai mural and manuscript painting.

In Thai folding books (samut khoi), the Ten Birth Tales are often used to illustrate a text with the title Mahabuddhaguna describing the Great Qualities of the Buddha (paramita). The Mahajanaka Jataka symbolises perseverance. A typical folio from a Thai folding book containing a collection of Buddhist texts including the Mahabuddhaguna in Khom (Khmer) script. Happy New Year – with a splash of cool water! Foreign travellers to 19th-century Siam. Thailand’s Banned ‘King’ by Ian Buruma.

The Thai government has never been fond of The King and I, the popular 1951 musical about an English schoolteacher’s tutoring of a nineteenth-century Thai king, now being revived on Broadway. ‘White Mughal’ William Fullerton of Rosemount. Scottish surgeon William Fullerton (d.1805) from Rosemount enlisted with the East India Company and served in Bengal and Bihar from 1744-66. Cabeiri Robinson, “Body of Victim, Body of Warrior: Refugee Families and the Making of Kashmiri Jihadists” (University of California Press, 2013)

Neilesh Bose, “Recasting the Region: Language, Culture, and Islam in Colonial Bengal” (Oxford UP, 2014) LLJ Big and Beautiful001 libre. Archaeologists unearth lost fortress of Genghis Khan in western Mongolia. Japanese and Mongolian archaeologists said Feb. 26 that they have discovered the remains of a 13th-century military outpost established for Mongol conqueror Genghis Khan (c. 1162-1227) in southwestern Mongolia. From Anatolia to Aceh: Ottomans, Turks and Southeast Asia. Tipu Sultan’s dream book (IO Islamic 3563) The Renaissance of the Sultans by William Dalrymple. SG50 According To My Grandma. 50 years of independence. Intersections: Gender and Sexuality in Asia and the Pacific.