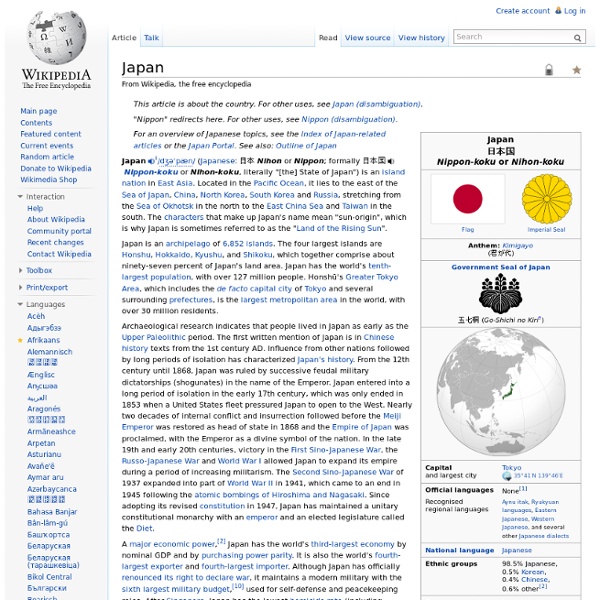 Japan i/dʒəˈpæn/ (Japanese: 日本 Nippon or Nihon; formally 日本国 Nippon-koku or Nihon-koku, literally the "State of Japan") is an island nation in East Asia. Archaeological research indicates that people lived in Japan as early as the Upper Paleolithic period. Periodic insurrections and civil disturbances continued into the 1870s. Etymology The English word Japan derives from the Chinese pronunciation of the Japanese name, 日本 , which in Japanese is pronounced Nippon listen or Nihon listen . From the Meiji Restoration until the end of World War II, the full title of Japan was Dai Nippon Teikoku (大日本帝國?) The English word for Japan came to the West via early trade routes. History Prehistory and ancient history A Paleolithic culture around 30,000 BC constitutes the first known habitation of the Japanese archipelago. The Nara period (710–784) of the 8th century marked the emergence of a strong Japanese state, centered on an imperial court in Heijō-kyō (modern Nara). Feudal era Re-engraved map of Japan

animated knots Vatican City Vatican City i/ˈvætɨkən ˈsɪti/, officially Vatican City State (Italian: Stato della Città del Vaticano;[note 4] pronounced [ˈstaːto della t͡ʃitˈta (d)del vatiˈkaːno]), is a landlocked sovereign city-state whose territory consists of a walled enclave within the city of Rome, Italy. It has an area of approximately 44 hectares (110 acres), and a population of around 840.[1] This makes Vatican City the smallest internationally recognized independent state in the world by both area and population. Vatican City is an ecclesiastical[1] or sacerdotal-monarchical[2] state, ruled by the Bishop of Rome—the Pope. In the city, there are cultural sites such as St. Vatican City State is distinct from the Holy See,[note 5] which dates back to early Christianity and is the main episcopal see of 1.2 billion Latin and Eastern Catholic adherents around the globe. Geography[edit] Map of Vatican City, highlighting notable buildings and the Vatican gardens The territory includes St. St. Climate[edit]

know more New Zealand New Zealand (Māori: Aotearoa [aɔˈtɛaɾɔa]) is an island country in the southwestern Pacific Ocean. The country geographically comprises two main landmasses – that of the North Island, or Te Ika-a-Māui, and the South Island, or Te Waipounamu – and numerous smaller islands. New Zealand is situated some 1,500 kilometres (900 mi) east of Australia across the Tasman Sea and roughly 1,000 kilometres (600 mi) south of the Pacific island areas of New Caledonia, Fiji, and Tonga. Because of its remoteness, it was one of the last lands to be settled by humans. During its long isolation, New Zealand developed a distinctive biodiversity of animal, fungal and plant life. Polynesians settled New Zealand in 1250–1300 CE and developed a distinctive Māori culture. Nationally, legislative authority is vested in an elected, unicameral Parliament, while executive political power is exercised by the Cabinet, led by the Prime Minister, who is currently John Key. Etymology History Politics Government Environment Art

shudokan history The advent of Gichin Funakoshi's introduction of Okinawan Karate to Japan in the early 1920's, the popularity of karate began to grow. Soon, other Okinawan masters began to travel to Japan to proliferate their arts. One such man was Kanken Toyama, whose Okinawan name was Kanken Oyadamari. A school teacher by profession, Toyama 's chosen avocation was the instruction of karate. He started his karate training at the age of 9 with a master named Itarashiki. Toyama became one of only two of Itosu's students to be granted the title of "Shihanchi", or protégé, of Itosu's O kuge (innermost secrets). A few of his other teachers were, Aragaki, Azato, Chibana, Higaonna, Oshiro, and Tana. Toyama 's interest in martial arts was not limited to karate. Given this diverse martial arts background, the Japanese government soon recognized Toyama 's prowess, and awarded him the right to promote to any rank in any style of Okinawan karate. Sensei Jim Mercer Eastside Family Karate

Rome Rome (/ˈroʊm/; Italian: Roma pronounced [ˈroːma] ( ); Latin: Rōma) is a city and special comune (named "Roma Capitale") in Italy. Rome is the capital of Italy and also of the Province of Rome and of the region of Lazio. With 2.7 million residents in 1,285.3 km2 (496.3 sq mi), it is also the country's largest and most populated comune and fourth-most populous city in the European Union by population within city limits. The urban area of Rome extends beyond the administrative city limits with a population of around 3.8 million.[2] Between 3.2 and 4.2 million people live in Rome metropolitan area.[3][4][5][6][7] The city is located in the central-western portion of the Italian Peninsula, on the Tiber within Lazio (Latium). The Vatican City is an independent country within the city boundaries of Rome, the only example of a country within a city existing. Etymology About the origin of the name Roma several hypotheses have been advanced.[15] The most important are the following: History

Toshiro Mifune Early life[edit] Toshiro Mifune was born on 1 April 1920 in Qingdao, Shandong, China, to Japanese parents. His parents were Methodist missionaries working there. Mifune grew up with his parents and two younger siblings in Dalian, Liaoning, China, and, from 4 to 19 years of age, in Manchuria.[1] In his youth, Mifune worked in the photography shop of his father Tokuzo, a commercial photographer and importer who had emigrated from northern Japan. Early work[edit] In 1947, one of Mifune's friends who worked for the Photography Department of Toho Productions suggested Mifune try out for the Photography Department. At this time, a large number of Toho actors, after a prolonged strike, had left to form their own company, Shin Toho. Mifune first encountered director Akira Kurosawa when Toho Studios, the largest film production company in Japan, was conducting a massive talent search, during which hundreds of aspiring actors auditioned before a team of judges. Marriage[edit] Honors[edit] English:

England England ( i/ˈɪŋɡlənd/) is a country that is part of the United Kingdom.[1][2][3] It shares land borders with Scotland to the north and Wales to the west. The Irish Sea lies north west of England, whilst the Celtic Sea lies to the south west. The North Sea to the east and the English Channel to the south separate it from continental Europe. Most of England comprises the central and southern part of the island of Great Britain which lies in the North Atlantic. The area now called England was first inhabited by modern humans during the Upper Palaeolithic period, but it takes its name from the Angles, one of the Germanic tribes who settled during the 5th and 6th centuries. England's terrain mostly comprises low hills and plains, especially in central and southern England. Toponymy The name "England" is derived from the Old English name Englaland, which means "land of the Angles".[10] The Angles were one of the Germanic tribes that settled in Great Britain during the Early Middle Ages.