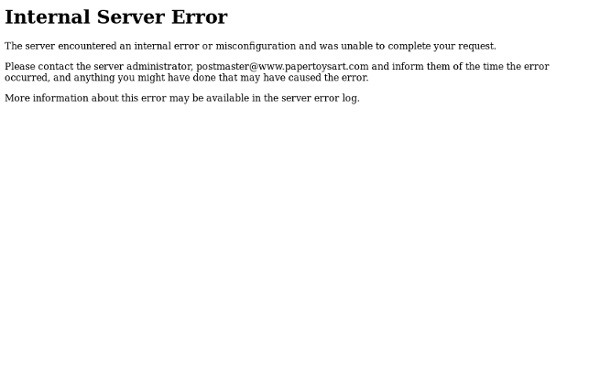 Chouette The first kit of the new year is this deceivingly simple looking little owl to expand the bird-population in 3EyedBear’s universe. We all know owls are one of the wisest creatures and this one certainly will be one day too. Thing is: she’s still very young and inexperienced, but she compensates that with a passion for reading thick books while you sleep. It don’t hurt to have her posted in your bedroom since owls hunt for little scary creatures by inborn instinct. (click one of the images to download Howie) Collect them all! Edit: Thank you for all the lovely blog-title suggestions in the comment-box. Now let’s send some pictures of one of the owls and share how you are taking care of them. -Darla from delicious Bakingdom created 3 Harry Potter-themed owls here for downloading. TAGS: None

Twitter Bird Have you ever wished the twitter bird could come alive… sit on your window sill and watch you as you tweet away your afternoon? lol…no? Well, how about the Twitter Birdie in 3-D perched atop your computer screen then So, no need to break out the bird seed, but you must admit, its pretty cool right? I found this Twitter Bird Paper Toy at Toy a Day. Download the PDF file here and make your own Twitter Bird toy! Related Posts No Related Post Using Gravatars in the comments - get your own and be recognized! XHTML: These are some of the tags you can use: <a href=""><b><blockquote><code><em><i><strike><strong>

Figurines en papier des personnages d’Arrested Development Kyle Hilton a créé une série d’illustrations des personnages de la série Arrested Development en poupées de papier à habiller avec des accessoires. Vous pouvez aussi les télécharger en pdf sur son site pour les imprimer. DollyOblong.com After some sneak peeks it’s time to finally reveal the robotandspark x Dolly Oblong collab: the Paper Irezumi Girls ! robotandspark is a creative studio based in Dubai who do some truly brilliant stuff (check out their sweet Robot VC3 toys). We briefly talked about doing a collab before and decided now was the time to make it happen :) The Irezumi girls are robotandspark’s next toy which will be released in November at the robotandspark BRING YOUR NEMESIS exhibition. To promote the release of Irezumi’s we made mini paper versions of all the girls: Lipstick, Vegas, Suicide & Tequila. This is a limited release which will only be available until May 3rd. For more pics click here

El Costurero papermate 3D paper diamonds Hello there. Hope you all had a great Easter! We had a lovely relaxing holiday (….well as relaxing as it gets with kids). It would have been great to have another week off ^_^ Before I forget I just want to say a big thank you for all the kind messages you have send me regarding my book (you really are a nice bunch!) I’ve been meaning to get this paper diamond up for weeks now…but it’s taken ages to figure the template out (and I’ve been having breaks between each failed attempt). It’s based on simplified version of Satoshi Kamiya’s origami diamond. These paper diamonds are tricky to make (& require a fair bit of patience) so definitely adults only! When you have made your diamonds you can attach thread and hang them up. How-to 1. 2. 3. 4. Happy Monday all! Edited to add: A few people have had problems printing the templates (the dotted lines do not print).